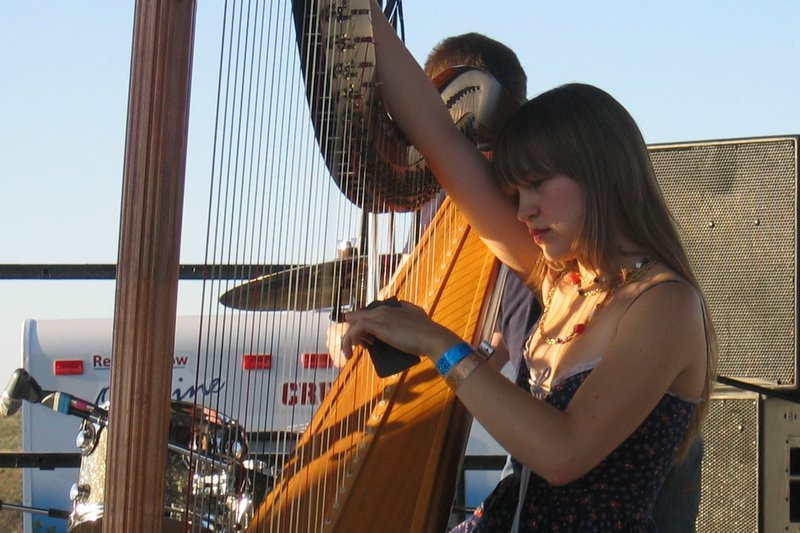 Newsom was first taught to play the by a local teacher in Nevada City. Later on she moved on to the and started composing.

After touring with , she was quickly signed to and released her debut album "" in 2004. Shortly thereafter, Newsom toured with and Vetiver and made an early UK appearance at the in , returning to headline in 2005.

Newsom's work has become prominent on the indie rock scene, and her profile has risen, in part due to a number of live shows and appearances on "" on ABC.

Her second album "Ys" was released in November 2006. The album features orchestrations and arrangements by , engineering from , and mixing by Drag City label-mate Jim O'Rourke. On a road trip, Bill Callahan recommended she listen to the album "Song Cycle" by Parks, which led to his being chosen to arrange her work on "Ys".

During her 2007 fall tour, Newsom began performing a new as yet untitled seven-and-a-half-minute song. In January 2008, Newsom debuted another new composition in Sydney, Australia. Then in July 2008 she debuted her third new song, a 7-minute piano piece at in , England, and later the same day debuted a fourth new piano composition in .

Although her harp playing is not completely divorced from conventional harp techniques, she considers her style distinct from that of classically focused harpists. She has been strongly influenced by the polymetric style of playing used by West African kora players. [ [http://www.arthurmag.com/magpie/?p=1580 NEARER THE HEART OF THINGS: Erik Davis on Joanna Newsom (Arthur Magazine)] ] Her harp teacher, Diana Stork, taught her the basic pattern of four beats against three, which creates an interlocking, shifting pattern that can be heard on "Ys", particularly in the middle section of "Sawdust & Diamonds."

The media have sometimes labeled her as one of the most prominent members of the modern movement, although she does not acknowledge ties to any particular musical scene. [ [http://www.fromamouth.com/milkymoon/quotes/right.php?id=993 as quoted in New York Magazine] ] Her songwriting incorporates elements of Appalachian music, avant-garde modernism, and African kora rhythms.

Newsom's vocal style (in the November 2006 issue of "The Wire" she described her voice as "untrainable") has shadings of folk and Appalachian shaped-note timbres. Newsom has, however, expressed disappointment at comments that her singing is "child-like." [ [http://nymag.com/nymetro/arts/music/pop/10651/ Q&A With Joanna Newsom ] ]

Alongside her solo material she has played on records by Smog, Vetiver, , , , and and played keyboards for .

Newsom's family includes her brother Pete, a fellow musician, and sister Emily, an astrophysicist who inspired her song "Emily" (and contributed backing vocals). [ [http://www.newyorker.com/critics/content/articles/061204crmu_music as quoted in the New Yorker] ]

;Contributions on compilations
*"The Golden Apples of the Sun" ("", 2004) With the song "Bridges and Balloons" (Originally released on "")