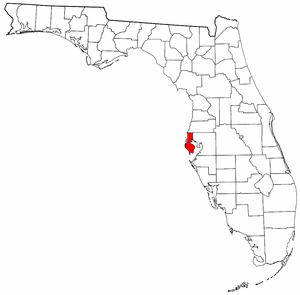 Pinellas County is a county located in the state of . Its is GR|6, and its largest is St. Petersburg. The county is contained entirely within , except for sections of Oldsmar, which has . It shares area code 727 with parts of West Pasco County. Pinellas along with Hillsborough County, Hernando County, and Pasco County comprises the Tampa-St.Petersburg-Clearwater , often called the .

Pinellas County seceded from Hillsborough County in 1911, and was named for the Spanish "Punta Piñal" ("Point of Pines" or "Piney Point"). The Pinellas Peninsula, dividing from the , and a small part of the were incorporated into the county.

Pinellas County has the (PSTA) as the public transit provider, with major stops at all local malls and employment centers. There are 197 buses and trolleys that serve 43 routes, in addition to the 2 express routes to downtown Tampa via the Howard Frankland and Gandy Bridges, connecting with HartLine. In addition, PSTA connects with PCPT in Tarpon Springs to continue service to western Pasco County. The 2 main bus terminals are located in downtown Clearwater and downtown St. Petersburg, with routes bisecting and crossing the entire county. During fiscal year 2005-06 PSTA transported 11,400,484 passengers.

The former Seaboard Air Line branch from the western coastal portion of the county was abandoned in the latter portion of the 20th century and converted to a popular recreational trail called the Pinellas Trail.

The county is served by the district.

Pinellas County has had 911 since 1978. Over the years, the system has evolved many times. Originally the Sheriffs Office handled north county areas and the City of St. Petersburg the south. In 1987 the Pinellas County Emergency Communications Center was formed and assumed the role of 911 center for the central and northern portions of the County. A year later “Enhanced 911" was installed countywide. The most recent change to the system occurred in December 1991. The Pinellas County Emergency Communications Center became the primary answering point for ALL 911 calls within the County.

You can listen to this agencies EMS, Police and Fire as well as Clearwater Police at [http://www.listentoscanners.com Live Radio Scanner]