George Washington Custis Lee (September 16, 1832 – February 18, 1913), also known as Custis Lee, was the eldest son of Robert E. Lee and Mary Anna Custis Lee. He served as a Confederate general in the American Civil War, primarily as an aide-de-camp to President Jefferson Davis, and succeeded his father as president of Washington and Lee University in Lexington, Virginia.

Lee was born in Fort Monroe, Virginia.[2] He was educated at numerous boarding schools, to prepare him in his father's footsteps. He was educated at the classical school of Reverend George A. Smith, in his younger years. He then entered the mathematical school of Benjamin Hallowell.[3] Lee was not given admission to West Point, at age sixteen.[2] Lee's father, Robert E. Lee, then sent a letter to General Winfield Scott on his son's behalf. Zachary Taylor then nominated Lee to West Point.[3] Lee was then accepted to West Point, at age seventeen.[2]

Lee was then commissioned in the Corps of Engineers, as his father before him.[2] He was given the rank of brevet Second Lieutenant. He served primarily in California, Georgia, and Florida during his time in the U.S. Army.[2][3] In 1855, he was given the rank of Second Lieutenant in the Regular Army. In 1859, Lee was commissioned a full First Lieutenant.[3] Lee was then stationed in Washington D. C., during the period of secession and Fort Sumter. He then resigned from the U.S. Army, in the spring of 1861 after Virginia seceded from the Union. He resigned about two weeks after his father had done the same. Lee then offered his services to his father's Virginia state forces.[2]

Lee served in the Virginia state forces, until July 1861. At that time he was given a commission as a Captain in the Confederate Army.[2] During the next few months, Lee worked in the Confederate engineers corps. He spent his time constructing fortifications for the new capital city, Richmond. At the end of August 1861, Lee was offered and accepted the position of aide-de-camp to Confederate President Jefferson Davis.[5] He was then promoted to the rank of Colonel. Lee served in his position for the next three years of the war. He was often sent on missions to assess the military, and would then return to report to Davis.[2] When Robert E. Lee became the commander of the Army of Northern Virginia, Custis Lee had constant contact with his father. In 1862, during the Peninsula Campaign, Lee was put in charge of supervising the engineers at Drewry's Bluff. In June 1863, he was promoted to Brigadier General.[2] Lee was discouraged from taking a field command by Davis, but encouraged by his father.[5] Lee asked his father for a field command, but his father replied that his highest duty was obedience to his superiors.[5] For the most part, he obeyed Davis, but during the Battle of Gettysburg, Lee was given the command of the troops in Richmond. In 1864, Lee was placed in command of Richmond's local defenses against General Grant and General Benjamin Butler.[2] He did so well that he was given command of Richmond's eastern defenses at Chaffin's Bluff.[2] Lee remained at Chaffin's Bluff throughout the next months, and in 1864, he was promoted to Major General. Shortly before the end of the war, he commanded troops in the field and was captured at Sayler's Creek, three days before his father surrendered to Lt. Gen. Ulysses S. Grant at the McLean House in the village of Appomattox Court House, Virgina (see: Appomattox Court House National Historical Park).[5] 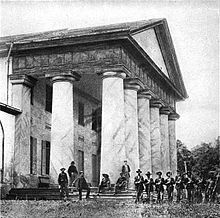 Arlington House during the American Civil War, with Union troops surrounding it.

In late 1865, Lee was hired as a professor at the Virginia Military Institute.[5] Lee held this position until the death of his father. Between 1871 and 1897, Lee served as the ninth president of Washington and Lee University.[6] In 1877, after his father's death, Custis Lee sued in a case that went all the way to the United States Supreme Court to regain title to the family mansion,[7] Arlington House and plantation, which had become Arlington Cemetery. Lee's case, United States v. Lee (106 U.S. 196),[8][9] was decided in his favor by a 5–4 vote, in 1882. Lee won both the house and the 1,100 acres (4.5 km2) surrounding the mansion. In 1883, Lee sold Arlington House to the United States Government for $150,000.[7] In 1897, Lee resigned as president of Washington and Lee University. He then moved to the home of his late brother, Major General William Henry Fitzhugh Lee, Ravensworth Mansion.[5] Lee died on February 18, 1913 in Alexandria, Virginia, and is buried in the Lee Chapel, near his family members.[5][10]