Bloom was born in the North London suburb of Finchley, the daughter of Elizabeth (née Grew) and Edward Max Blume, who worked in sales.[1] Her paternal grandparents, originally named Blumenthal, as well as her maternal grandparents, originally named Griewski, were Jewish immigrants from Eastern Europe.[2] Bloom attended secondary school at the independent Badminton School in Bristol.

After training at the Guildhall School of Music & Drama and the Central School of Speech and Drama, Bloom made her debut on BBC radio programmes. She made her stage debut in 1946, when she was 15, with the Oxford Repertory Theatre. Her London stage debut was in 1947 in the hit Christopher Fry play The Lady's Not For Burning, which also featured the young Richard Burton, starred John Gielgud and Pamela Brown and which, subsequently, was produced, with the aforementioned four, on Broadway in New York. The following year, she received great acclaim for her portrayal of Ophelia in Hamlet, the first of many works by William Shakespeare in which Bloom would appear.

Bloom has appeared in a number of plays and theatrical works in both London and New York. Those works include Look Back in Anger, Rashomon, and Bloom's favorite role, that of Blanche in the Tennessee Williams play A Streetcar Named Desire. Bloom has also performed in a one woman show that included monologues from several of her stage performances. She also starred in 1976 Broadway revival of The Innocents.

Bloom's first film role was in 1948, for the film The Blind Goddess.

She was chosen by Charlie Chaplin in 1952 to appear in his film Limelight, which catapulted Bloom to stardom, and remains one of her most memorable roles. She was subsequently featured in a number of "costume" roles in films such as Alexander the Great, The Brothers Karamazov, The Buccaneer, and The Wonderful World of the Brothers Grimm. Bloom also appeared in Laurence Olivier's film version of Richard III, where she played Lady Anne, Ibsen's A Doll's House, The Outrage with Paul Newman and Laurence Harvey, as well as the films The Spy Who Came in from the Cold and Look Back in Anger, both with Richard Burton.

In the 1960s she began to play more contemporary roles, including an unhinged housewife in The Chapman Report, a psychologist in the Oscar winning film Charly, and Theodora in The Haunting. She also appeared in the Woody Allen films Crimes and Misdemeanors (1989) and Mighty Aphrodite (1995). She played Hera in Clash of the Titans. Laurence Olivier played Zeus her husband, and in Richard III she played the wife of Richard, who he played. Her most recent appearance in a Hollywood film was in the 2010 film The King's Speech.

Bloom has appeared on television, perhaps the most memorable of which was her portrayal of Lady Marchmain in Brideshead Revisited (1981). Other roles included two prominent BBC Television productions for director Rudolph Cartier; co-starring with Sean Connery in Anna Karenina (1961), and playing Cathy in Wuthering Heights with Keith Michell as Heathcliff (1962).[3] She also appeared as First Lady Edith Wilson in Backstairs at the White House (1979); as Joy Gresham, the wife of C. S. Lewis in Shadowlands (For that performance she received the BAFTA Award as Best Actress. (1985), and as the older Sophy in the 1992 mini-series The Camomile Lawn on Britain's Channel 4. Her most recent appearance in a mini-series was in the 2006 version of The Ten Commandments.

On continuing television series, she has appeared on the New York-based Law & Order: Criminal Intent. From 1991 to 1993, she portrayed villainess Orlena Grimaldi on the daytime drama As the World Turns. She also had major roles in several of the BBC-Shakespeare Play television presentations and has led workshops on Shakespearean performance practices. In 2003, Bloom did a stage reading of Milton's Samson Agonistes along with actor John Neville at Bryn Mawr College at the behest of poet Karl Kirchwey.[4] 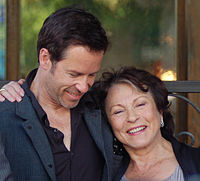 Bloom with Guy Pearce, a fellow actor in The King's Speech, January 2011

In ]anuary 2006, she appeared on the London stage in Arthur Allan Seidelman's production of Six Dance Lessons in Six Weeks by Richard Alfieri, a two-hander in which she co-starred with Billy Zane.

In October 2007, she appeared opposite Peter Bowles in Love Letters at the Théâtre Princesse Grace, Monte Carlo as part of the British Theatre Season, Monaco.

In 2008, she guest starred in New Tricks as actress Helen Brownlow. The story was about the murder of her husband whilst they were in a play together.

In December 2009, she appeared in the BBC's Doctor Who alongside David Tennant in his final story as the Tenth Doctor, as a Time Lord credited only as "The Woman." Series executive producer Russell T Davies revealed in his 2010 book The Writer's Tale that the character is supposed to be the Doctor's mother.

In 2010, she guest starred as Jill Peters in The Bill in the episode "Taking a Stand".

In 2011 she played Queen Mary in The King's Speech.

Bloom has married three times. Her first marriage, in 1959, was to actor Rod Steiger, whom she had met when they both performed in the play Rashomon. Their daughter is opera singer Anna Steiger, Bloom's only child. Steiger and Bloom divorced in 1969. In that same year, Bloom married producer Hillard Elkins. The marriage lasted three years and the couple divorced in 1972. Bloom's third marriage on April 29, 1990 was to writer Philip Roth, her longtime companion. The couple divorced in 1995.

Bloom has written two memoirs about her life and career. The first, Limelight and After: The Education of an Actress, was released in 1982 and was an in-depth look at her career and the film and stage roles she had portrayed. Her second book, Leaving a Doll's House: A Memoir, was published in 1996, and went into greater details about her personal life; she discussed not only her marriages but her romantic relationships with Richard Burton and Laurence Olivier. The book created a stir when Bloom detailed the highly complicated relationship between her and Philip Roth during their marriage. The details Bloom shared were unflattering to Roth, and created a controversy regarding the true nature of their relationship. The character of Eve Frame in Roth's 1998 novel I Married a Communist is considered by some to be his veiled rebuttal to some of the accusations made against him in her memoir.