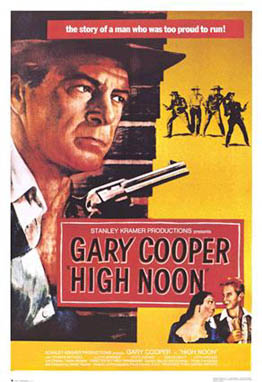 "High Noon" is a 1952 directed by and starring and . The film tells the story of a town who is forced to face a gang of killers by himself. The screenplay was written by and , based on Cunningham's pulp short story, "The Tin Star".

In 1989, "High Noon" was selected for preservation in the United States by the as being "culturally, historically, or aesthetically significant", entering the registry during the latter's first year of existence. The film is #27 on the 's 2007 list of great films.

Will Kane (), the longtime of Hadleyville, , has just married pacifist Amy (), turned in his badge, and is preparing to move away to become a storekeeper. Soon after, the town learns that Frank Miller (Ian MacDonald), a criminal Kane brought to justice, is due to arrive on the noon train. Miller had been sentenced to the , but was pardoned due to a technicality. In court, he had vowed to get revenge on Kane and anyone who got in his way. His three gang members wait for him at the station. The worried townspeople encourage Kane to leave, hoping to defuse the situation.

Kane and his wife leave, but Kane has a crisis of conscience and turns back. He reclaims his badge and tries to swear in help, but it becomes clear that no one is willing to get involved. His deputy, Harvey Pell (), resigns. Only his former lover, Helen Ramírez (), supports him, but there is little she can do to help. Disgusted, she sells her business and prepares to leave town. His wife threatens to leave on the noon train with or without him, but he stubbornly refuses to give in.

In the end, Kane faces the four gunmen alone. He guns down two of Miller's men, though he himself is wounded. Helen Ramirez and Amy both board the train, but Amy gets off when she hears the sound of gunfire. Amy chooses her husband's life over her religious beliefs and kills the third gunman by shooting him in the back. Miller then takes her hostage and offers to trade her for Kane. Kane agrees, coming out into the open. Amy, however, claws Miller's face, causing him to release her. Kane then shoots and kills him. Then, as the cowardly townspeople emerge, Kane contemptuously throws his marshal's star in the dirt and leaves town with his wife.

* as Marshal Will Kane
* as Amy (Fowler) Kane
* as Helen Ramirez
* as Deputy Sheriff Harvey Pell
* Ian MacDonald as Frank Miller
* Thomas Mitchell as Mayor Jonas Henderson
* as Judge Percy Mettrick
* as Martin Howe (as Lon Chaney)
* as Sam Fuller (as Henry Morgan)
* as Mildred Fuller
* as Dr. Mahin, Minister
* as Cooper
* as Jack Colby
* as Pierce (as Robert Wilke)
* as Ben Miller
* as Charlie the Drunkard (uncredited)

There was some controversy over the casting of Cooper in the lead role: at 50, nearly 30 years older than co-star Kelly, he was considered too old for the role.fact|date=February 2008

Zinnemann was highly influenced by the books of , which he had read as a child.

According to the 2002 documentary "", written, produced, and directed by , Foreman's role in the creation and production of "High Noon" has over the years been unfairly downplayed in favor of Foreman's former partner and producer, .

Upon its release, the film was criticized by many filmgoers, as it did not contain such expected western archetypes as chases, violence, action, and picture postcard scenery. Rather, it presented emotional and moralistic dialogue throughout most of the film. Only in the last few minutes were there action scenes. ["The Making of High Noon", hosted by , 1992. Available on the Region 1 DVD from .]

strongly disliked the film because he felt it was an allegory for , which he and his best friend had actively supported. In his interview from May , Wayne stated he considered "High Noon" "the most thing I’ve ever seen in my whole life" and went on to say he would never regret having helped blacklist liberal screenwriter from Hollywood. He later teamed up with director to make "Rio Bravo" as a conservative response. Ironically, Cooper himself had been a "friendly witness" to the HUAC several years earlier, and Wayne also accepted Cooper's Academy Award for the role as Cooper was unable to attend the presentation.

The movie won for Best Actor in a Leading Role (Gary Cooper), Best Film Editing ( and ), [Elmo Williams has said that Gerstad's editing was nominal, and he apparently protested Gerstad's inclusion on the Academy Award at the time. See Williams, Elmo (2006), "Elmo Williams: A Hollywood Memoir" (McFarland), p. 86. ISBN 0786426217.] Best Music, Scoring of a Dramatic or Comedy Picture (), and Best Music, Song (Dimitri Tiomkin and for "Do Not Forsake Me, Oh My Darlin'", sung by ). It was nominated for Best Director, Best Picture, and Best Writing, Screenplay. Its loss in the Best Picture category to "" is usually seen as one of the biggest upsets (and one of the worst choices) in the history of the Academy Awards. This loss is often cited as due to bias against westerns on the part of the Academy. Ironically, despite severely disliking the film, it was John Wayne who picked up Gary Cooper's Academy Award.

Mexican actress Katy Jurado won the Golden Globe for Best Supporting Actress for her role of Helen Ramirez, becoming the first Mexican actress ever to receive the award.

"High Noon", often describedwho as an "existential Western", is generally praised, although it was somewhat controversial upon its release in . Cooper's character is betrayed by all the "good" men in town who won't take up arms for a just cause. stated the film was intended as an of the contemporary failure of intellectuals to combat the rise of , as well as how people in Hollywood had remained silent while their peers were blacklisted.Fact|date=November 2007 The film has also been embraced by thosewho who admire its emphasis on duty and courage.

"High Noon" transpires virtually in real-time, in contrast to traditional westerns such as "The Searchers". In another departure from the norm, there is little action until the final 10 minutes. The only exception is a fistfight between Kane and his former deputy, Harvey Pell. The film's tension derives mainly from Kane’s desperation, aided by skillful editing and strong character portrayal. The frequent shots of various clocks with the hands approaching noon and still shots of those involved, heighten the tension.

Another effective technique is the , just before the final gunfight. The shot backs up and rises, and we see Will totally alone and isolated on the street. The entire town has deserted him.

The director intendedfact|date=February 2008 to capture the atmosphere of old Civil War photographs, with an austere gray sky as a backdrop. (This effect results from the fact that early film emulsions were most sensitive to blue and ultraviolet light; Zinneman's attempts to reproduce this effect in the film were one of the reasons he strongly opposed its proposed colorization). Despite the constraints of a limited budget ($750,000) and only 32 days to film, he was able to obtain this.

According to an English professor at

*A made-for-TV sequel, "High Noon Part II: The Return Of Will Kane" (produced in , 28 years after the original movie was released), featured in the Cooper role.
*The 1980 science fiction film "Outland" borrowed from the story of "High Noon" for its plot. The movie starred .
*The episode "The Afternoon Plane" borrowed both plot and characters directly from the movie.
*In , "High Noon" was entirely re-worked for cable television with in the lead role.