Disk buffer
Not to be confused with page cache. 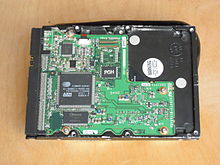 The disk buffer sits on the controller board of the hard drive.

In computer storage, disk buffer (often ambiguously[citation needed] called disk cache or cache buffer[citation needed]) is the embedded memory in a hard drive acting as a buffer between the rest of the computer and the physical hard disk platter that is used for storage. Modern hard disks come with 8 to 64 MiB of such memory.

Since the late 1980s, nearly all disks sold have embedded microcontrollers and either an ATA, Serial ATA, SCSI, or Fibre Channel interface. The drive circuitry usually has a small amount of memory, used to store the bits going to and coming from the disk platter.

Note that disk array controllers, as opposed to disk controllers, usually have normal cache memory of around 0.5–8 GiB.

When executing a read from the disk, the disk arm moves the read/write head to (or near) the correct track, and after some settling time the read head begins to pick up bits. Usually, the first sectors to be read are not the ones that have been requested by the operating system. The disk's embedded computer typically saves these unrequested sectors in the disk buffer, in case the operating system requests them later.

The speed of the disk's I/O interface to the computer almost never matches the speed at which the bits are transferred to and from the hard disk platter. The disk buffer is used so that both the I/O interface and the disk read/write head can operate at full speed.

The disk's embedded microcontroller may signal the main computer that a disk write is complete immediately after receiving the write data, before the data are actually written to the platter. This early signal allows the main computer to continue working even though the data has not actually been written yet. This can be somewhat dangerous, because if power is lost before the data are permanently fixed in the magnetic media, the data will be lost from the disk buffer, and the file system on the disk may be left in an inconsistent state. On some disks, this vulnerable period between signaling the write complete and fixing the data can be arbitrarily long, as the write can be deferred indefinitely by newly arriving requests. For this reason, the use of write acceleration can be controversial. Consistency can be maintained, however, by using a battery-backed memory system for caching data — although this is typically only found in high end RAID controllers. Alternatively, the caching can simply be turned off when the integrity of data is deemed more important than write performance. Another option is to send data to disk in a carefully managed order and to issue "cache flush" commands in the right places, like the ZFS file system does.

Newer SATA and most SCSI disks can accept multiple commands while any one command is in operation through "command queuing" (see NCQ and TCQ). These commands are stored by the disk's embedded controller until they are completed. Should a read reference the data at the destination of a queued write, the to-be-written data will be returned. Command queuing is different from write acceleration in that the main computer's operating system is notified when data is actually written onto the magnetic media. The OS can use this information to keep the file system consistent through rescheduled writes.

Disk buffer sizes over 8MiB do not produce any performance gains.[1] Where a buffer is large and the throughput of the disk is slow, the data becomes cached for too long, resulting in degraded performance over equivalent disks with smaller buffers. This degradation occurs because of longer latencies when flush commands are sent to a disk with a full buffer.[2]