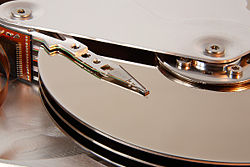 A hard disk head and arm on a platter 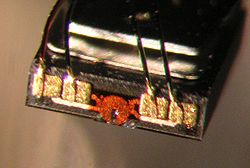 Microphotograph of a hard disk head. The size of the front face is about 0.3 mm. One functional part of the head is the round, orange structure in the middle - the lithographically defined copper coil of the write transducer. Also note the electric connections by wires bonded to gold-plated pads.

In a hard drive, the heads 'fly' above the disk surface with clearance of as little as 3 nanometres. The "flying height" is constantly decreasing to enable higher areal density. The flying height of the head is controlled by the design of an air-bearing etched onto the disk-facing surface of the slider. The role of the air bearing is to maintain the flying height constant as the head moves over the surface of the disk. If the head hits the disk's surface, a catastrophic head crash can result.

The heads themselves started out similar to the heads in tape recorders—simple devices made out of a tiny C-shaped piece of highly magnetizable material called ferrite wrapped in a fine wire coil. When writing, the coil is energized, a strong magnetic field forms in the gap of the C, and the recording surface adjacent to the gap is magnetized. When reading, the magnetized material rotates past the heads, the ferrite core concentrates the field, and a current is generated in the coil. The gap where the field is very strong and quite narrow. That gap is roughly equal to the thickness of the magnetic media on the recording surface. The gap determines the minimum size of a recorded area on the disk. Ferrite heads are large, and write fairly large features. They must also be flown fairly far from the surface thus requiring stronger fields and larger heads.

For more details on this topic, see giant magnetoresistance.

The next head improvement was to optimize the thin film head for writing and to create a separate head for reading. The separate read head uses the magnetoresistive (MR) effect which changes the resistance of a material in the presence of magnetic field. These MR heads are able to read very small magnetic features reliably, but can not be used to create the strong field used for writing. The term AMR (A=anisotropic) is used to distinguish it from the later introduced improvement in MR technology called GMR (giant magnetoresistance). The introduction of the AMR head in 1996 by IBM led to a period of rapid areal density increases of about 100% per year. In 2000 GMR, giant magnetoresistive, heads started to replace AMR read heads.

In 2005, the first drives to use tunneling MR (TMR) heads were introduced by Seagate allowing 400 GB drives with 3 disk platters. Seagate introduced TMR heads featuring integrated microscopic heater coils to control the shape of the transducer region of the head during operation. The heater can be activated prior to the start of a write operation to ensure proximity of the write pole to the disk/medium. This improves the written magnetic transitions by ensuring that the head's write field fully saturates the magnetic disk medium. The same thermal actuation approach can be used to temporarily decrease the separation between the disk medium and the read sensor during the readback process, thus improving signal strength and resolution. By mid-2006 other manufacturers have begun to use similar approaches in their products.

During the same time frame a transition to perpendicular magnetic recording is occurring (PMR), in which for reasons of improved stability and higher areal density potential, the traditional in-plane orientation of magnetization in the disk is being changed to a perpendicular orientation. This has major implications for the write process and the write head structure, as well as for the design of the magnetic disk media or hard disk platter, less directly so for the read sensor of the magnetic head.