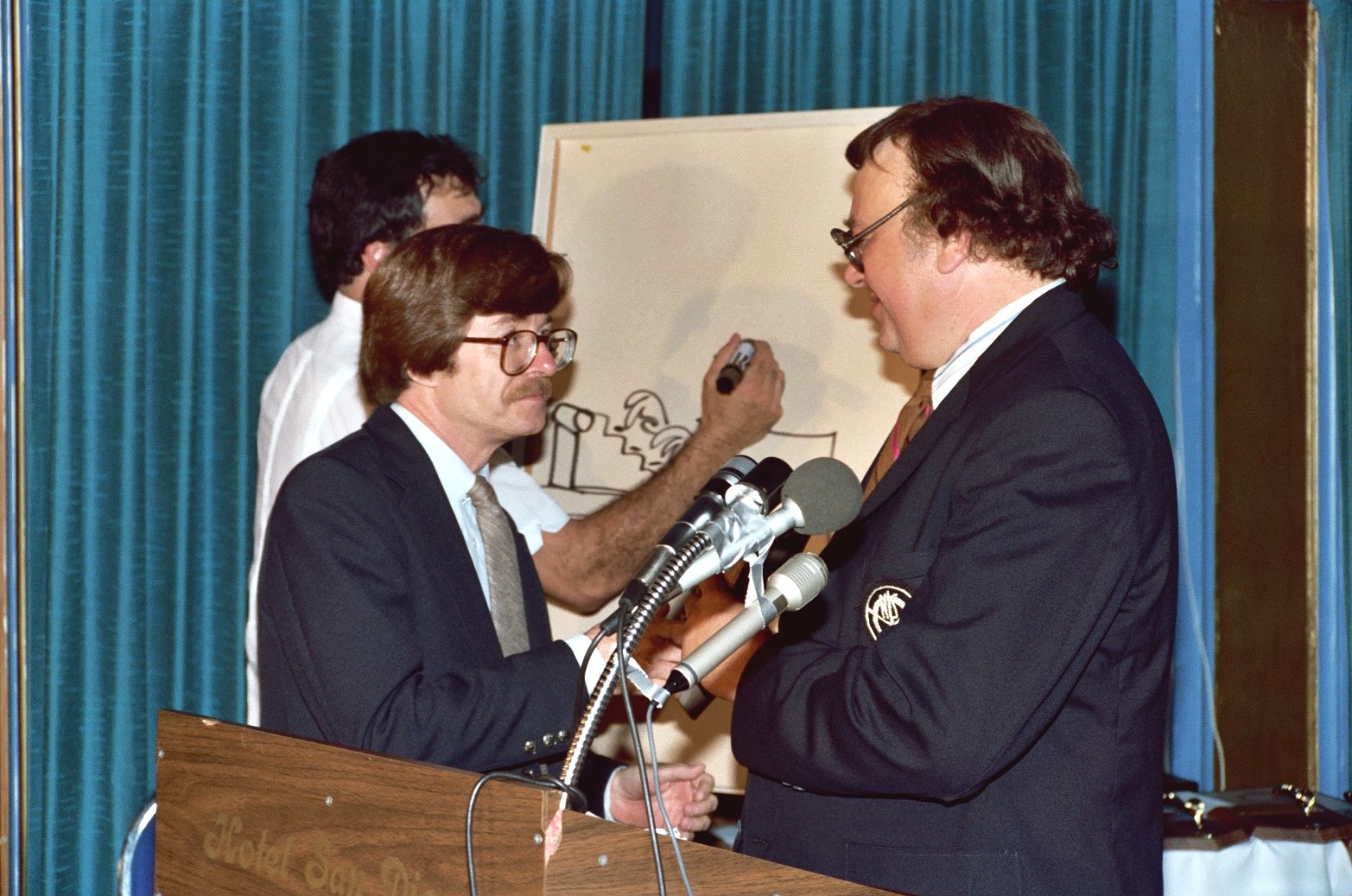 Archie Goodwin (, &ndash; , ) was an American writer, editor, and artist. He worked on a number of s in addition to comic books, and is best known for his Warren and work. For Warren he was chief writer and editor of landmark horror anthology titles "" and "", and for Marvel he set up the creator-owned as well as adapting "" into both comics and newspaper strips. He is regularly cited as the "best-loved comic book editor, ever."

Archie Goodwin was born in , and lived in many small towns along the / border including . But he considered — where he spent his teen years at and in used magazine stores searching for — as his true hometown.

He moved to to attend classes at what became the , ultimately finding work as working as an artist both drawing cartoons for magazines, and beginning his comics career as a freelance "writer and occasional art assistant" to 's newspaper strip "". His first editorial work was for "" magazine, which he worked for both before and after his Army service as a draftee.

In 1962, he joined , and two years later became the main script writer for Warren's "" magazine, much of his work (according to Batman editor Mark Chiarello) an "homage to the favorite comics of his youth, the E.C. line." By the second issue he was co-credited (alongside Russ Jones) as editor, and soon became editor of the entire Warren line: "Creepy", "" and "". [ [http://www.comicbookdb.com/issue.php?ID=127468 Comic Book Db: "Creepy" #2 (1965)] . Accessed August 2, 2008] He worked for Warren between 1964 and 1967, as head writer and Editor-in-Chief, in which roles he is credited with providing a mythology for Warren's classic character, as well as penning her most compelling stories. "(Additional details about his time at Warren may be found in 's book "The Warren Companion".)"

After his departure from Warren in 1967, Goodwin would occasionally contribute stories over the next 15 years and even returned for a short stint as editor in 1974.

Archie Goodwin's first prose story was published by "" which warned him he could not use Archie Goodwin as a because it was a character in the books. They were so delighted to learn that it was his birth name that they used the coincidence as the theme of their introduction. (Goodwin was invited to be the keynote speaker at the 1993 Black Orchid Banquet sponsored by the [http://www.nerowolfe.org Wolfe Pack] . His topic was "What's It Like to be Archie Goodwin.")

From 1967 to 1980, Goodwin wrote also wrote scripts for , including the , drawn by , as well as working on other strips including "". Not constrained to newspaper strips alone, he found work at the major comics companies as both writer and editor, working for on titles including "" and "", and briefly replacing as editor of "" at between 1973 and 1974.

In 1976, Goodwin replaced to become the eighth Editor-in-Chief of Marvel Comics, with the understanding it would only be temporary until a permanent replacement could be found. He ultimately resigned in 1978 and was replaced by . As Editor-in-Chief he secured the rights for Marvel to publish the "" adaptation and tie-in series, which then sold phenomenally well (helped by a dearth of other "Star Wars" merchandise at the time) at a point when the comics industry was in severe decline and many executives at Marvel were contemplating winding things up and leaving comics altogether. While he worked on numerous series throughout his career, it is his "Star Wars" work that he is best remembered for. He adaptated the original film into an on-going comic book, continuing the story (pre-"") in both a comic book series and daily comic strip. He also wrote comic book adaptions of the films "Alien", "" and "". Some, including , have attributed the very survival of Marvel to Goodwin's (and ') efforts in securing the rights.

After Marvel Comics passed on publishing the American incarnation of "" ("Heavy Metal"), Editor-in-Chief was charged with producing an alternate title, which became "". Initially edited by Rick Marshall, Shooter ultimately recalls approaching to tell him:Goodwin was at the time still working for Marvel as a writer, and Shooter recalls concocting a plan whereby the company "pretended that Archie reported to Stan. In fact, I was doing all the paperwork and all the employee reviews and the budgets," so that Goodwin could have the illusion of not working for his successor.

In addition to Marvel's first creator-owned imprint "", Goodwin set up the series, giving a number of artists and writers their first break as well as allowing established Marvel staff to work with material too difficult or 'adult' for the monthly titles. 's "Star Slammers" and 's "Dreadstar" were two of the earliest creator-owned graphic novels, and Shooter claims that Frank Miller's "Ronin" was slated to be released alongside them before he was wooed by DC.

As Shooter recalls events, he approached Goodwin after the moderate success of the "Epic" magazine and creator-owned graphic novels to produce a full-fledged line of creator-owned comics, . Baulking at the additional workload, Shooter turned to , before Goodwin reportedly berated Shooter for giving control to another editor, ultimately taking responsibility for the line himself.

Having worked briefly for the company during the 1970s, where he edited a handful of issues of the war comics "G.I. Combat" and "Star-Spangled War Stories", Goodwin returned to as an editor and writer in 1989. He wrote the graphic novel " [http://www.dccomics.com/graphic_novels/?gn=1257 Batman: Night Cries] " painted by and published in 1992. Throughout the 1990s, Goodwin edited a number of Batman projects, including the miniseries "", and the -written/-illustrated parody one-shot "Batman: Mitefall", a take-off of the saga, filtered through the character of . [ [http://www.comicbookdb.com/issue.php?ID=34458 ComicBookDb: "Batman: Mitefall" (1995)] . Accessed August 2, 2008]

Among Goodwin's most notable last editorial projects were Starman, written by and first published by DC in 1994 and DC's ' by and . It is a testament to Goodwin that Loeb has said that Goodwin inspired their portrayal of Gotham police chief Jim Gordon in "The Long Halloween" and its sequel ', while Robinson (who considered Goodwin both a mentor and close personal friend), continued to list Goodwin as a "Guiding Light" on later issues of "Starman". Goodwin also helped oversee many issues of the out-of-continuity Batman title "", and the on-going series "Azrael", spinning out of the Knightfall saga.

Goodwin, and particularly his "Creepy" work, is cited by editor (who also considered Goodwin a personal mentor) as informing the creation of the comics, for which Goodwin also penned several stories.

Goodwin died unexpectedly in 1998; few people knew he had been battling cancer. Goodwin was honored in a special tribute issue of the magazine ""; more information is available at Comicfun.com. [ [http://www.comicsfun.com/cbprofiles/issueag.htm Comic Book Profiles: Archie Goodwin Tribute Issue ] ] Further personal information is also available in Blake Bell's book "I Have to Live with this Guy".

His work won him a good deal of recognition in the industry, including both the 1973 for Best Writer (Dramatic Division), and the 1974 Shazam Award for Best Writer (Dramatic Division) for the Manhunter series running in "" #437 - 443, in addition to winning Shazam Awards for Best Individual Short Story for "The Himalayan Incident" in "Detective Comics" #437, "Cathedral Perilous" in "Detective Comics" #441 and "Götterdämmerung" in "Detective Comics" #443 (all with ; all for "Manhunter" episodes). Goodwin's work on "Manhunter", in which he both updated an obscure Golden Age hero, and, in the series' last episode, took the daring approach of killing him off (one of the few comic book deaths that has actually "taken" and not been reversed or away in the decades since it occurred) is very well-regarded by both fans and other comics professionals.

He is also name-checked in issues of Marvel's "Star Wars" comics (later rebranded "Classic Star Wars"), including in the Alien-language words "Niwdoog Eihcra," his name in reverse.