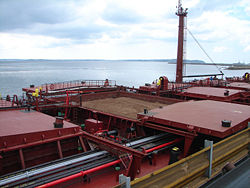 The OBO-carrier Maya. The picture is showing both the cargo hold hatches used for bulk and the pipes used for oil

An Ore-bulk-oil carrier, also known as combination carrier or OBO, is a ship designed to be capable of carrying wet or dry cargoes. The idea is to reduce the number of empty (ballast) voyages, in which large ships only carry a cargo one way and return empty for another. These are a feature of the larger bulk trades (e.g. crude oil from the Middle East, iron ore and coal from Australia, South Africa and Brazil).

Today:
OBO-carriers are today not as common as they were in the 70-80's. This due to some serious accidents in the 1980's. However, some ship-owner still prefer the OBO-concept and its trading flexibility. SKS Tankers [1] is today operating the largest OBO-fleet in the world, this consisting of 12 OBO carriers. The latest obo-vessel in the fleet,SKS Mersey, was delivered in 2003 from Hyundai Heavy Industries.[2] The design of these vessels have significantly been improved compared to the vessels made in the seventies, and all problems which was related to the OBO-concept have been dealt with.

Accidents:
In addition to MV Berge Istra and MV Berge Vanga, one of the more famous OBOs was the Derbyshire MV Derbyshire of 180,000 deadweight tonnes, which in September 1980 became the largest British ship ever lost at sea. It sank in a Pacific typhoon while carrying a cargo of iron ore from Sept-Îles in Canada to Japan.

A fleet of smaller, "river-sized" (several thousand tonnes) ore-bulk-oil carriers have been used for some decades on European Russia's waterways, primarily by Volgotanker. The Russian word for 'ore-bulk-oil carrier', nefterudovoz (нефтерудовоз, literally 'oil/ore carrier'), in combination with a number, is often used as a proper name for a ship, e.g. Nefterudovoz-51M. [3][4]