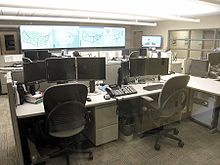 Overview of a typical NOC. Lot of monitors (front), backbone overview (back) and news broadcast on TV-set (right)

A network operations center (or NOC, pronounced like the word "knock") is one or more locations from which control is exercised over a computer, television broadcast, or telecommunications network.

Large organizations may operate more than one NOC, either to manage different networks or to provide geographic redundancy in the event of one site being unavailable or offline.

NOCs are responsible for monitoring the telecommunication network for alarms or certain conditions that may require special attention to avoid impact on the network's performance. For example, in a telecommunications environment, NOCs are responsible for monitoring for power failures, communication line alarms (such as bit errors, framing errors, line coding errors, and circuits down) and other performance issues that may affect the network. NOCs analyse problems, perform troubleshooting, communicate with site technicians and other NOCs, and track problems through resolution. If necessary, NOCs escalate problems to the appropriate personnel. For severe conditions that are impossible to anticipate – such as a power failure or optical fiber cable cut – NOCs have procedures in place to immediately contact technicians to remedy the problem.

NOCs are frequently laid out with several rows of desks, all facing a video wall, which typically shows details of highly significant alarms, ongoing incidents and general network performance; a corner of the wall is sometimes used for showing a news or weather TV channel, as this can keep the NOC technicians aware of current events which may have an impact on the network or systems they are responsible for.

The back wall of the NOC is sometimes glazed; there may be a room attached to this wall which is used by members of the team responsible for dealing with serious incidents to meet while still able to watch events unfolding within the NOC.

Individual desks are generally assigned to a specific network, technology or area. A technician may have several computer monitors on their desk, with the extra monitors used for monitoring the systems or networks covered from that desk.

NOCs often escalate issues in a hierarchic manner, so if an issue is not resolved in a specific time frame, the next level is informed to speed up problem remediation. Many NOCs have multiple "tiers", which define how experienced/skilled a NOC technician is. A newly-hired NOC technician might be considered a "tier 1", whereas a technician that has been there for several years may be considered a "tier 3" or "tier 4". As such, some problems are escalated within a NOC before a site technician or other network engineer is contacted.

Additionally, the NOC staff may perform extra duties; a network with equipment in public areas (such as a mobile network Base Transceiver Station) may be required to have a telephone number attached to the equipment for emergencies; as the NOC may be the only continuously staffed part of the business, these calls will often be answered there.

The term NOC is normally used when referring to telecommunications providers, although a growing number of other organizations such as public utilities (e.g., SCADA) and private companies also have such centers, both to manage their internal networks and to provide monitoring services.

The location housing a NOC may also contain many or all of the primary servers and other equipment essential to running the network, although it is not uncommon for a single NOC to monitor and control a number of geographically dispersed sites.

NOCs at television broadcast facilities are responsible for the technical and operational overview of all broadcast network services, including monitoring, correcting, and troubleshooting day-to-day issues.

Duties that fall under broadcast NOCs include: