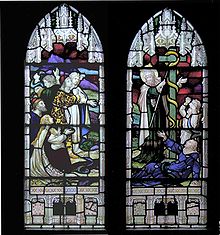 Moses lifts up the brass snake, curing the Israelites of snakebites. Hezekiah called the snake Nehushtan.

The Nehushtan (or Nehustan, Hebrew: נחושתן or נחש הנחושת), in the Hebrew Bible, was a sacred object in the form of a snake of brass upon a pole. The priestly source of the Torah says that Moses used a 'fiery serpent' to cure the Israelites from snakebites. (Numbers 21:4-9) King Hezekiah (reigned 715/6 – 687) instituted a religious iconoclastic reform and destroyed "the brazen serpent that Moses had made; for unto those days the children of Israel did offer to it; and it was called Nehushtan." (2 Kings 18:4) The tradition of naming it Nehushtan is no older than the time of Hezekiah.[1] 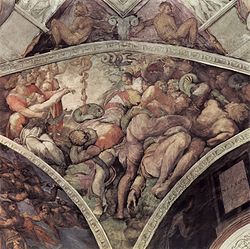 In 1508 Michelangelo's image of the Israelites deliverance from the plague of serpents by the creation of the bronze serpent on the ceiling of the Sistine Chapel.

Snake cults had been well established in Canaan in the Bronze Age: archaeologists have uncovered serpent cult objects in Bronze Age strata at several pre-Israelite cities in Canaan: two at Megiddo,[2] one at Gezer,[3] one in the sanctum sanctorum of the Area H temple at Hazor,[4] and two at Shechem.[5]

According to Lowell K. Handy, the Nehushtan was originally the symbol of a minor god of snakebite-cure within the Temple.[6] The name of this god is unknown, however, the use of "brazen serpent" is a subtle play on words that are based on the metal that the snake is made of: נחש (nachash) means "serpent", while נחשת (nachoshet) means "brass" or "bronze".

The Israelites set out from Mount Hor, where Aaron was buried, to go to the Red Sea. However they had to detour around the land of Edom (Numbers 20:21, 25). Frustrated and impatient, they complained against Yahweh and Moses (Num. 21:4-5). This is the last of the complaint stories in the Book of Numbers.[7] Just east of Palestine, God plagued them with "fiery serpents" for their mumurs against Him. For the sake of repentant ones, Moses was instructed by God to build a serpent of bronze that was used as an instrument to heal those who looked upon it (Numbers 21:4-9).

In source criticism by Martin Noth, the bronze serpent passage in Numbers 21:4-9, proceeds smoothly and is free of doublets, thus it does not appear to divide into different 'sources' even with the unusual juxtapostion of 'God' in v.5. The predominating use of the name Yahweh supposes that its appearance is original. In terms of the documentary hypothesis, the narrative can be allocated to the E source.[8]

In 2 Kings 18:4, a bronze serpent was set up in the Jerusalem Temple sanctuary.[8] The Masoretic text says that "he [Hezekiah] called it Nehushtan". According to Young's Literal Translation, Nehushtan means "piece of brass" (2 Kings 18:4). Karen Randolph Joines makes the distinction that it was Hezekiah who discriminatingly called the image Nehushtan, rather than it being some common term used by the Israelites.[9] When Hezekiah had become King, he tore down the Nehushtan. It has been suggested that Hezekiah's destruction of the Nehushtan was a result of the balance of power moving towards Assyria, which permitted him to remain on the throne of Judah as a puppet ruler. Hezekiah demonstrated his loyalty to the new regime by the destruction of an important symbol with Egyptian associations.[10] 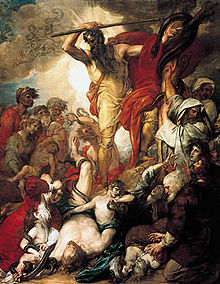 The Brazen Serpent, by Benjamin West; among the overthrown, an unmistakable reference to the Laocoön

As Moses lifted up the serpent in the wilderness, even so must the Son of Man be lifted up, that whoever believes in Him should not perish but have eternal life - (John 3:14-15)

The Serpent of bronze in Numbers 21 is a well known image for Christians because of its use by Jesus in the Gospel of John. Jesus discussed his destiny with a Jewish teacher named Nicodemus[11] by referencing a passage in Chukat of the Torah. Jesus gave a direct comparison between the raising up of the Son of Man and the act of the Mosaic serpent being raised up. Charles Spurgeon asserted that in this passage, Jesus was referring to his forthcoming crucifixion, and demonstrating the significance of the cross as spiritual healing from the curse of sin.[12]