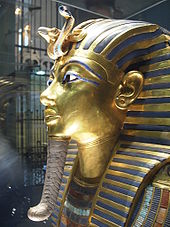 The Uraeus (plural Uraei or Uraeuses, from the Greek οὐραῖος, from Egyptian jʿr.t (iaret) "rearing cobra") is the stylized, upright form of an Egyptian spitting cobra (asp, serpent, or snake), used as a symbol of sovereignty, royalty, deity, and divine authority in ancient Egypt.

The Uraeus is a symbol for the goddess Wadjet, who was one of the earliest Egyptian deities and who often was depicted as a cobra. The center of her cult was in Per-Wadjet, later called Buto by the Greeks.[1] She became the patroness of the Nile Delta and the protector of all of Lower Egypt, so her image was worn by the pharaohs as a head ornament, first as the body of Wadjet atop the head or as a crown encircling the head, always remaining in effect part of their crown, indicating her protection and as a claim over the land. The pharaoh was recognized only by wearing the uraeus, which conveyed legitimacy to the ruler. There is evidence for this tradition even in the Old Kingdom during the third millennium B.C. Several goddesses associated with, or being considered aspects of Wadjet are depicted wearing the uraeus also.

At the time of the unification of Egypt, the image of Nekhbet, who was represented as a white vulture and held the same position as the patron of Upper Egypt, joined the image of Wadjet on the Uraeus that would encircle the crown of the pharaohs who ruled the unified Egypt. The importance of their separate cults kept them from becoming merged as with so many Egyptian deities. Together they were known as The Two Ladies, who became the joint protectors and patrons of the unified Egypt.

Later, the pharaohs were seen as a manifestation of the sun-god Ra, and so it also was believed that the Uraeus protected them by spitting fire on their enemies from the fiery eye of the goddess. In some mythological works, the eyes of Ra are said to be uraei. Wadjets existed long before the rise of this cult when they originated as the eye of Wadjet as cobra and are the name of the symbols also called the Eye of the Moon, Eye of Hathor, the Eye of Horus, and the Eye of Ra—depending upon the dates of the references to the symbols.

As the Uraeus was seen as a royal symbol, Horus and Set were also depicted wearing the symbol on their crowns. In early mythology, Horus would have been the name given to any king as part of the many titles taken, being identified as the son of the goddess. According to the later mythology of Re, the first uraeus was said to have been created by the goddess Isis who formed it from the dust of the earth and the spittle of the then current sun deity. In this version of the mythology, the uraeus was the instrument with which Isis gained the throne of Egypt for Osiris. Isis is associated with, and may be considered an aspect of Wadjet.

In 1919, after only a half-hour of excavation, the Qufti worker Hosni Ibrahim held in his hands the solid gold Golden Uraeus of Senusret II. It had been decided to make a (follow-up) complete clearance of the El-Lahun Pyramid's rooms at Saqqara. The start in the rock-cut offering chamber, leading from the tomb, on the south, immediately revealed in the turnover of the six inches of debris, the Golden Uraeus crown ornament.

Prior to the 1922 find of Tutankhamun's tomb, this Golden Uraeus was the only ornament ever known to be worn by an entombed pharaoh and it was thought that it was passed to the next pharaoh.

The Golden Uraeus is of solid gold, 6.7 cm, black eyes of granite, a snake head of deep ultramarine lapis lazuli, the flared cobra hood of dark carnelian inlays, and also inlays of turquoise. For mounting on the pharaoh's crown, two loops in the rear-supporting tail of the cobra provide the attachment points.[2][3]

Uraeus as a hieroglyph

Beside the Uraeus being used as an ornament for statuary or as an adornment on the pharaoh, it also was used for jewellery and in amulets. However another important use is as the hieroglyph.

The simplest hieroglyph is the "Cobra" (the Uraeus), however there are subcategories, referring to: a goddess, a priestess, the goddess Menhit, the shrine of the goddess (àter), the goddess Isis, and lastly goddess: (Cobra (uraeus) at base of deity (ntr)).