The Abaco Islands were first inhabited by the Lucayan. The first European settlers of the islands were Loyalists fleeing the American Revolution who arrived in 1783, as was also the case at Cat Island. These original Loyalist settlers made a modest living by salvaging wrecks, by building small wooden boats, and by basic farming.

Prior to the 1970s, a group of American businessmen, arms traffickers, supporters of free enterprise, a black agent of the information services, and a Member of Parliament of the British House of Lords planned the independence of Abaco, or that would have a UK dependency status similar to that of Anguilla. Abaco was to be a utopia for businessmen fearing socialism.

They would promise one acre (4,000 m²) to each of the natives on the island. This would have left thousands of acres for realtors and their financial backers. At least one flag was designed, combining the Hope Town Lighthouse with a Union Flag.

The British government had no interest in this scheme, which in any case would have been strongly opposed by the national government in Nassau. Finally, the locals did not support the plan, perhaps because unspoken racial issues are alleged to have mixed into it. In any event, the Abaco Independence Movement was quelled by 1975.

The combined population of the islands is about 13 000, and the principal settlement and capital is Marsh Harbour. The racial make up is about 50% white and 50% black.

The islands are a noted base for sailing activities in the Bahamas, as well as resort tourism. 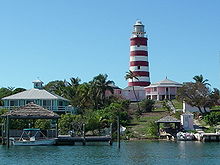 The red and white striped lighthouse at Hope Town in the Abaco Islands, is a noted local landmark.

Marsh Harbour Airport and Treasure Cay Airport serve the islands. Marsh Harbour Airport is famous because of the nine lifes lost among them a famous popstar named Aaliyah Outer islands can be reached by ferries operated by Alburys Ferry Service and Green Turtle Ferry. Bahamas Fast Ferry operates between Nassau and Sandy Point on the southern end of Abaco. On the main island cars and boat are available. While on some of the smaller cays, golf carts and boats are the main mode of transportation, along with bikes or scooters.

The Abaco Islands boast important natural areas, especially important coral reef areas, barrier-island terrestrial habitats and large forests of Bahamian Pine (Pinus caribaea var. bahamensis), some of which still contain old-growth trees. As development expands in the Abacos, local groups have begun to more fiercely fight for the preservation of their natural resources, such as in the development case on Great Guana Cay.[1]

Notable species include the Bahamian subspecies of Cuban Amazon (Amazona leucocephala bahamensis), which exists only in Cuba, the Cayman Islands, the southern Bahamas and Abaco. This population is unique in that nests in limestone solution cavities rather than tree cavities. Abaco is also known for its intact elkhorn and staghorn coral structures, and for its critically endangered breed of feral horse, the Abaco Barb.