Sing a Song of Six Pants

Sing a Song of Six Pants 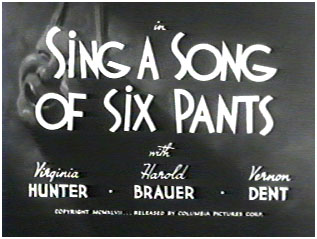 The Stooges run a tailor shop that is about to be repossessed by the Skin and Flint Finance Corporation. When the Boys hear about a big reward for fugitive bank robber 'Terry "Slippery Fingers" Hargan' (Harold Brauer), they think that catching him might end their financial woes. Hargan conveniently ducks into their shop and leaves a suit with a safe combination in its pocket. After his girlfriend (played by ) fails to retrieve the combination, Hargan returns with his henchmen, and a wild mêlée follows. The Stooges miss out on the reward but wind up with the crook's bankroll to pay off their debts.

* The title is a takeoff on "," the classic English .
* "Sing a Song of Six Pants" was remade in 1953 as "", using ample recycled footage from the original.
* The name of the tailor shop is 'Pip Boys,' a parody of the auto service chain . Also, the Stooges' names on the store window are written 'Lary ("sic"), Moe & Shemp,' paralleling the traditional listing of the Pep Boys' names as 'Manny, Moe & Jack.' (Note that Larry's name is, for some reason, spelled with only one "r".)
* Director Jules White "guest-stars" as the voice of the radio announcer.
* "Six Pants" is one of four Stooge shorts that fell into the after the copyright lapsed in the 1960s (the other three being "", "", and ""). As such, these four shorts frequently appear on inexpensive video or DVD compilations.