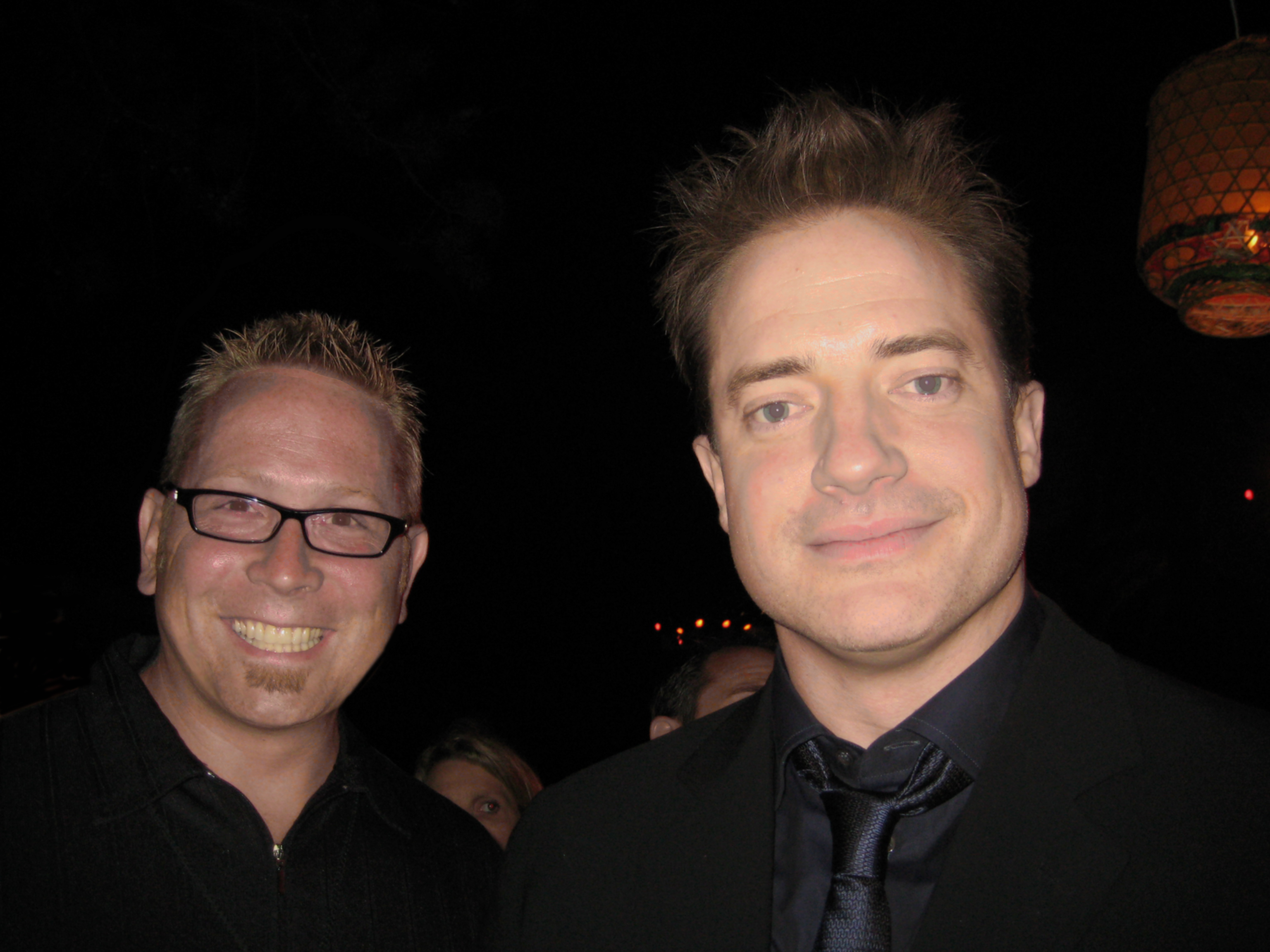 Major film projects in 2008 included () and (). He has produced numerous television projects including starring from Van’s concept with writer Nicholas Pileggi (, ).His credits also include hit series such as (A&E) and other and series as well as innovative viral marketing web series and mobile series. His next project stars and .

Van was born in where his parents worked at the NASA Marshall Space Flight Center. As a child, he would frequently spend his after school days and weekends at the and Space Camp where he fell in love with films and television documenting the space race and the human experience. His childhood hero was .

The family later moved to Air Base in where Van discovered many adventures, traveling extensively as a young adult to European countries and immersing himself in history and culture. Van also developed a talent for languages studying German and Russian. He also became an admitted adrenaline junkie earning certifications and awards for snow skiing, mountaineering, rifelry, spelunking, SCUBA diving, catamaran sailing, motocross racing, skydiving and even hang gliding. As an extension of these adventures, Van wrote, directed and produced a number of 8mm films covering these subjects.

An excellent student, Van dreamed of one day working at the NASA in . In 1985, he received a scholarship to nearby where he enrolled as one of over 300 freshmen in the Department of Aerospace Engineering, later graduating in 1990 as one of only 34 remaining students. At the age of 19, Van became one of the youngest protégées ever selected by into its undergraduate program and began working in Mission Control at the .

Van received a Top Secret clearance and trained astronauts for space walks, working underwater in the and flying in zero-gravity aboard the famed . Van also earned multiple certifications including flight instructor, logging over 1200 pilot-in-command hours in 29 different types of aircraft. Continuing his love of storytelling, Van was able to work with 16mm and 72mm cameras used by the astronauts to film breathtaking scenes.

Following graduation, Van attended the in in 1990 (and returned as an instructor in 1991 in ). He received a post graduate fellowship at the Alabama Space Grant Consortium [ "Alabama Space Grant Consortium": [http://spacegrant.eng.ua.edu] ] where he designed and built experiments and computer hardware that flew into space aboard Consort Rockets and the and earned a Masters of Science degree.

With his adventurous background and language skills, Van was commissioned as an Ensign in the in 1992. After his promotion to Lieutenant in 1994, Van became a Naval Intelligence Officer serving with aboard the USS Whirlwind, the , and the aircraft carrier . Van’s training and experience helped craft his strategic and leadership abilities.

In the early 1990s, Van became an expert with the new technology of the Internet and its ability to distribute entertainment. While still in graduate school in 1994, he helped form TAC Systems, an early technology pioneer of and , and was elected to the Board of Directors. In 1995, for his software and design prowess, Van was named a Japan scholar and spent four months in where he worked closely with , and other leading Japanese multinational corporations on next generation communication software and entertainment hardware. In 1996, he joined TAC full time as President, working closely with the investor group, and helped bring about its successful sale in 1997. Van was recognized for his achievements by Inc. Magazine, who as part of its mission to identify and bring together the next generation of entrepreneurs, named him to its prestigious Birthing of Giants ["Digi-Net Chief Executive Accepted Into Prestigious Entrepreneur Program": [http://newsroom.digi-net.com/releases/050504.html] ] ["Birthing of Giants": [http://www.inc.com/events/birthingofgiants] ] group.

Van was then recruited to outside as Marketing Senior Executive with plans to take the search engine public on the heals of the very successful IPOs of and . and other Digital Equipments assets proved to be too enticing and the company was acquired by Compaq Computer Corporation [ "HP Timeline -- 1990s": [http://www.hp.com/hpinfo/abouthp/histnfacts/timeline/hist_90s.html] ] in 1999 for $9.6 billion – at the time the largest acquisition in computer industry history.

Using personal proceeds from the TAC and DEC acquisitions, Van formed a venture capital firm in 1998 called whodoweknow.com [ "whodoweknow.com": [http://www.secinfo.com/dRqWm.5Su8.u.htm] ] and made a number of early stage investments including The Saratoga Group (acquired by ChannelWave [ "ChannelWave Obtains Third Round of Funding, Buys ASP": [http://www.crn.com/it-channel/18808367] ] ), Frictionless Commerce (acquired by SAP [ "SAP buys its way into on-demand SRM": [http://www.infoworld.com/article/06/05/17/78411_HNsapondemand_1.html] ] ) and, along with fellow entrepreneur , Yazam [ "Yazam Raises $60 Million To Fund Global Expansion": [http://findarticles.com/p/articles/mi_m0EIN/is_2000_April_27/ai_61753518] ] (acquired by US Technologies [ "SEC Info - US Technologies Inc": [http://www.secinfo.com/dsVsf.435u.htm] ] ). Van often took an active role in his investments, serving as a “mentor” capitalist and working closely with the founders.

In 1999, Van moved to Chicago and became the first outside member of the board of directors for WebPromote where he set about to rapidly accelerate this pioneering internet advertising and entertainment company. Van hired the CEO and management team and led a $10 million venture capital round with other notable investors including Andrew “Flip” Filipowski [ "The Outspoken CEO of Chicago-Based Divine Interventures Intends to Spread Internet Wealth Across the Heartland": [http://www.iw.com/magazine.php?inc=070100/7.01interview.html] ] .

Van personally created and negotiated 14 of the 15 public company strategic partnerships including major revenue sharing agreements with AOL and others. He helped craft the renaming of the firm to yesmail.com and the SEC registration statement to prepare for the IPO [ "E-mail Ad Firm Yesmailcom Files for IPO": [http://www.clickz.com/135081] ] . Van then helped select the investment banking team led by . He has commented publicly that one of his proudest moments was standing on the floor of the stock exchange as the first shares of Yesmail were publicly traded to Microsoft Co-Founder , one of the smartest and richest men in the world, thus forever validating Van's strategy. The YESM IPO in September 1999, valued the firm at over $360 Million. Van continued to serve on the board of the public corporation and was instrumental in arranging the sale of YESM to in March 2000 for $770 Million. The firm was later spun out and sold to .

As a then confirmed serial entrepreneur, Van formed "matrixx" in 2000 as a broadband entertainment and production company and began meeting with major studio and record label executives. While at the , the events of unfolded. Van was recalled to active duty as a Naval Intelligence Officer and was deployed on a classified mission for . Following that mission, he was discharged in 2002. During his course of military service, he was awarded The Joint Service Medal, Two Navy Achievement Medals, The National Defense Service Medal and Expert Pistol and Expert Rifle Marksmanship Medals.

Van and his wife Laura (a graduate of the at and veteran of several leading creative agencies including and ) share a love of eco-adventure and world travel.

Other notables include four-star General and recipient (the is named for Archer) and , patron and wife to . Their son Lloyd became the inspiration for . The Vandegrift family name has undergone a number of variations in the since pilgrims arrived in the early 1700s in (now ). Common variations today include Vandergrift, Vandegriff and Vandergriff. was named for Captain Jacob Vandergrift [ "Captain Jacob Vandergrift": [http://www.vvmhs.com/jjv.htm] ] and today is a quaint Victorian town.