Order of the Iron Crown

The Imperial Order of the Iron Crown was established June 5, 1805 by Napoleon Bonaparte (under his title of King Napoleon I of Italy). It took its name from the ancient Iron Crown of Lombardy, a medieval jewel with an iron ring, forged from what was supposed to be a nail from the True Cross as a band on the inside. This crown also gave its name to the Italian Order of the Crown. After the fall of the Napoleonic Kingdom of Italy, the order was reestablished as an Austrian order by the same name in 1815.

Significance of the Iron Crown 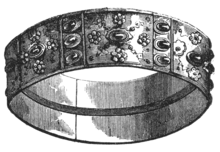 The Iron Crown of Lombardy, made for Theodelinda, Queen of the Lombards, was alleged to be crafted from one of the original nails in the True Cross used in the Crucifixion of Jesus. Regardless of origin, her crown was crafted of six hinged plates of gold, set with precious gems, and held together with an iron circlet structure, underneath. Thus, came the term “Iron Crown.”

Upon Theolinda’s death in 628, her crown was donated to the Church at Monza, where it still remains. It was used during the coronation of Holy Roman Emperor Charlemagne, as he took the throne of Lombardy, in 774. Later Holy Roman Emperors followed suit in this tradition.

Imperial Order of the Iron Crown

During his continued expansion of power, Napoleon Bonaparte conquered Italy in much the same manner as Charlemagne. As a symbolic gesture, he too, had himself crowned as King of Italy, using the Iron Crown of Lombardy for the coronation. The coronation occurred on May 26, 1805.

Three weeks later, Emperor Napoleon founded the Imperial Order of the Iron Crown, on June 15, 1805. The Order was divided into three classes, with 20 grand cross knights, 30 knight commanders, and 50 ordinary knights. With his eventual defeat at Waterloo, in 1815, the Imperial French Order ceased to exist.

Masters of the Order