Mike Mangold (born October 10, 1955) is a Boeing 767 commercial pilot for American Airlines and an aerobatics pilot. Mangold competed in the Red Bull Air Race World Series from 2004 through 2009, where he repeatedly placed first and won the World Championship in the 2005 World Series, as well as the 2007 World Series. His nickname is "Mongo".

Mangold was born in Cincinnati, Ohio, and is the oldest of three children (Robert and Frank). He moved to California at 3 years old and then to Pennsylvania for his high school years.

Mangold began his aviation career in 1974 as a skydiver while attending the United States Air Force Academy. He went on to USAF pilot training, learned to fly fighters, eventually attending the United States Air Force Fighter Weapons School. Mangold graduated first in his class earned the "Outstanding Graduate" award. During his military career Mike served in the Pacific and Conus theaters, flying nuclear, conventional, smart weapons, and air intercept missions in the F-4 Phantom, including the F-4G "Wild Weasel". After leaving active duty he became a commercial airline pilot, starting his competitive aerobatic and air show career in 1990. In 2004 Mike got into air racing by joining the Red Bull Air Race and in 2007 the National Championship Air Races flying a Lancair IV in the Sport class and a L-29 Delfin in the Jet class. Mangold has over 16,000 hours of flying time, including 2,500 hours of military fights and 5,500 hours of aerobatics.

Mangold also skydives, hang glides, and skis. In 1996, Mangold, along with 296 other skydivers, set a world record for the most amount of people in a skydiving free-fall formation in Anapa, Russia. Mangold commented on his passion for skydiving: "Skydiving; that's how I relax now. It's great, you are at one with the air, you are totally relaxed, no pressure." Mike's wife Julie was once a test pilot for the US Army and now is also a commercial airline and aerobatic pilot. They have an eight-year-old son, Nicholas, who loves doing rolls in his father's aircraft, and a five-year-old daughter, Melissa. 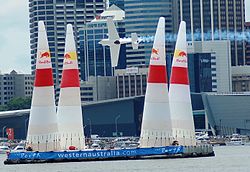 Mangold racing in Perth during the 2006 series