Martin Šonka (born on March 26, 1978 in Dvůr Králové nad Labem) is a Czech aerobatics (unlimited) and a fighter pilot in the Czech Air Force. He is the beginner from the year 2010 in Red Bull Air Race.[1]

Martin Šonka began his aviation career in 1997. In this year he first time flew a glider for the first time and started his studies at University of Defence in Brno as a pilot. In 1999 he gained his Private Pilot Licence. Between 2001 and 2005 he was attending Jan Perner Transport Faculty at University of Pardubice (Department of Transport Management, Marketing and Logistics). He finished his studies with master’s degree in 2005.

His military career started in 2000 in Pardubice. Two years after he moved to the air base in Náměšť nad Oslavou and in 2006 to 21st Tactical Air Force Base at Čáslav where he began flying L-159 Alca.

In 2005 he became a member of the Czech national aerobatic team. He flies Su-31. 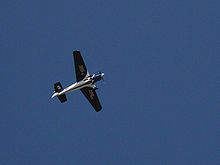 Martin Šonka taking off from Jandakot airport for the final practice before the Perth Red Bull Air Race.

Legend: * CAN: Cancelled * DNP: Did not take part * DNS: Did not start * DSQ: Disqualified