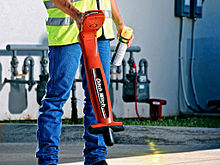 Location by these means is necessary because maps often lack the pinpoint precision needed to ensure proper clearance. In older cities, it is especially a problem since maps may be very inaccurate, or may be missing entirely.

"Call before you dig", "Digger's Hotline", "One-call", "Miss Utility", or Underground Service Alert are services that allow construction workers to contact utility companies, who will then denote where underground utilities are located via color-coding those locations. As required by law and assigned by the U.S. Federal Communications Commission (FCC), the 8-1-1 telephone number will soon be used for this purpose across the United States.

Failure to call such a number ahead of time may result in a fine or even a criminal charge against the person or company, particularly if such negligence causes a major utility outage or serious accident, or an evacuation due to a gas leak. Hitting a water main may also trigger a boil-water advisory and local flooding.

Utility color codes are used for identifying existing underground utilities in construction areas with the intent of protecting them from damage during excavation.

Public utility systems are often run underground; some by the very nature of their function, others for convenience or aesthetics. Before digging, local governments often require that the underground systems' locations be denoted and approved, if it is to be in the public right-of-way.

Colored lines at and/or flags are used to mark the location and denote the type of underground utility. A special type of spray paint, which works when the can is upside-down, is used to mark lines, often in a fluorescent color. On flags, a logo often identifies the company or municipal utility which the lines belong to, or an advertisement for a company which has installed an irrigation system for lawns or gardens. In this case, each sprinkler head is usually marked, so that landscaping crews will not cover or bury them with soil or sod, or damage them with tractors or other construction equipment while digging holes for trees, shrubs, or other large plants or fenceposts. This is also important because a vehicle (tractor, truck, or otherwise) can break a sprinkler or the hard-PVC pipe or joint it is mounted on simply by driving over it, particularly on newly-moved soil which is uncompacted and therefore unsupportive of such weight.