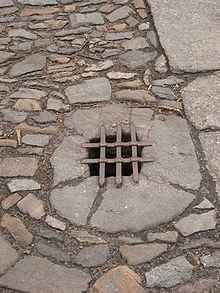 A storm drain, storm sewer (US), stormwater drain (Australia and New Zealand) or drainage well system (UK) or simply a drain or drain system is designed to drain excess rain and ground water from paved streets, parking lots, sidewalks, and roofs. Storm drains vary in design from small residential dry wells to large municipal systems. They are fed by street gutters on most motorways, freeways and other busy roads, as well as towns in areas which experience heavy rainfall, flooding and coastal towns which experience regular storms.

Full view of a storm drain

There are two main types of stormwater drain (storm sewer) inlets; side inlets and grated inlets. Side inlets are located adjacent to the curb (kerb) and rely on the ability of the opening under the backstone or lintel to capture flow. They are usually depressed at the invert of the channel to improve capture capacity.[1] Grated inlets have gratings or grids to prevent large objects and debris from falling into the sewer system. However, their bars are fairly widely spaced so that the flow of water is not impeded. Consequently, many small objects can fall through. 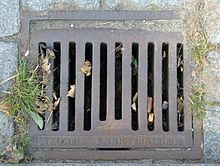 Many of these small objects are caught by the catchbasin, or sump, which lies immediately below the grating. Water from the top of the catchbasin drains into the sewer proper. The catchbasin serves much the same function as the "trap" in household wastewater plumbing in trapping objects.

In the United States, unlike the trap, the catchbasin does not necessarily prevent sewer gases such as hydrogen sulfide and methane from escaping. However in the United Kingdom, where they are called gulley-pots, they are designed as true water-filled traps and do block the egress of gases and rodents.

Most catchbasins will contain stagnant water during the drier parts of the year and can be used by mosquitoes for breeding. The performance of catchbasins at removing sediment and other pollutants depends on the design of the catchbasin (e.g., the size of the sump), and routine maintenance to retain the storage available in the sump to capture sediment. Municipalities typically have large vacuum trucks that perform this task.

Catchbasins act as pretreatment for other treatment practices, such as retention basins, by capturing large sediments. 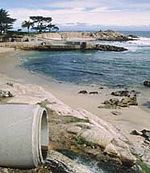 Pipes can come in many different shapes (rectangular, square, bread-loaf shaped, oval, inverted pear-shaped, and more commonly, circular). Drainage systems may have many different features including waterfalls, stairways, balconies and pits for catching rubbish, sometimes called Gross Pollutant Traps (GPTs). Several different materials can also be used, such as brick, concrete, metal and even plastic in some cases.

The first flush from urban runoff can be extremely dirty. Storm water may become contaminated while running down the road or other impervious surface, or from lawn chemical run-off, before entering the drain.

Water running off these impervious surfaces tends to pick up gasoline, motor oil, heavy metals, trash and other pollutants from roadways and parking lots, as well as fertilizers and pesticides from lawns. Roads and parking lots are major sources of nickel, copper, zinc, cadmium, lead and polycyclic aromatic hydrocarbons (PAHs), which are created as combustion byproducts of gasoline and other fossil fuels. Roof runoff contributes high levels of synthetic organic compounds and zinc (from galvanized gutters). Fertilizer use on residential lawns, parks and golf courses is a significant source of nitrates and phosphorus.[2][3]

Runoff into storm sewers can be minimized by including sustainable urban drainage systems (UK term) or low impact development practices (US term) into municipal plans. To reduce stormwater from rooftops, flows from eaves troughs (rain gutters and downspouts) may be infiltrated into adjacent soil, rather than discharged into the storm sewer system. Storm water runoff from paved surfaces can be directed to unlined ditches (sometimes called swales or bioswales) before flowing into the storm sewers, again to allow the runoff to soak into the ground. Permeable paving materials can be used in building sidewalks, driveways and in some cases, parking lots, to infiltrate a portion of the stormwater volume.[4] In many areas detention tanks are required to be installed inside a property and are used to temporarily hold rainwater runoff during heavy rains and restrict the outlet flow to the public sewer. This lessens the risk of the public sewer being overburdened during a heavy rain. An overflow outlet may also be utilized which connects higher on the outlet side of the detention tank. This overflow would prevent the detention tank from completely filling up. By restricting the flow of water in this way and temporarily holding the water in a detention tank public sewers are far less likely to become surcharged. 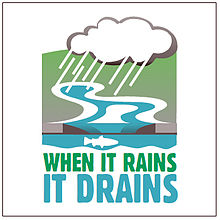 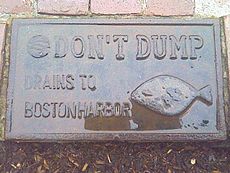 Typical storm drain signage on the streets of Boston

Storm drains are separate and distinct from sanitary sewer systems. The separation of storm sewers from sanitary sewers helps to prevent sewage treatment plants becoming overwhelmed by infiltration/inflow during a rainstorm, which can result in untreated sewage being discharged into the environment.

Many storm drainage systems are designed to drain the storm water, untreated, into rivers or streams. Many local governments conduct public awareness campaigns about this, lest waste be dumped into the storm drain system.[5] In the city of Cleveland, Ohio, for example, all new catch basins installed have inscriptions on them not to dump any waste, and usually include a fish imprint as well. Trout Unlimited Canada recommends that a yellow fish symbol be painted next to existing storm drains.[6]

Cities that installed their sewage collection systems before the 1930s typically used single piping systems to transport both urban runoff and sewage. This type of collection system is referred to as a combined sewer system (CSS). The cities' rationale when combined sewers were built was that it would be cheaper to build just a single system.[7] In these systems a sudden large rainfall that exceeds sewage treatment capacity will be allowed to overflow directly from the storm drains into receiving waters via structures called combined sewer overflows.[8]

New York City, Washington DC, Seattle and other cities with combined systems have this problem due to a large influx of storm water after every heavy rain. Some cities have dealt with this by adding large storage tanks or ponds to hold the water until it can be treated. Chicago has a system of tunnels, collectively called the Deep Tunnel, underneath the city for storing its stormwater.[10] In many areas detention tanks or roof detention systems are required to be installed for a property and are used to temporarily hold rainwater runoff during heavy rains and restrict the outlet flow to the public sewer. This lessens the risk of the public sewer being overburdened during a heavy rain. An overflow outlet may also be utilized which connects higher on the outlet side of the detention tank. This overflow would prevent the detention tank from completely filling up. By restricting the flow of water in this way and temporarily holding the water in a detention tank or by roof detention public sewers are far less likely to become surcharged.[11]

Separation of undesired runoff can be done within the storm sewer system, but such devices are new to the market and can only be installed with new development or during major upgrades. They are referred to as oil-grit separators (OGS) or oil-sediment separators (OSS). They consist of a specialized manhole chamber, and use the water flow and/or gravity to separate oil and grit.[12]

Building codes and local government ordinances vary greatly on the handling of storm drain runoff. New developments might be required to construct their own storm drain processing capacity for returning the runoff to the water table and bioswales may be required in sensitive ecological areas to protect the watershed.

In the United States, cities, suburban communities and towns with over 10,000 population are required to obtain discharge permits for their storm sewer systems, under the Clean Water Act.[13] The Environmental Protection Agency (EPA) issued stormwater regulations for large cities in 1990 and for other communities in 1999.[14] The permits require local governments to operate stormwater management programs, covering both construction of new buildings and facilities, and maintenance of their existing municipal drainage networks. Many municipalities have revised their local ordinances covering management of runoff. State government facilities, such as roads and highways, are also subject to the stormwater management regulations.[15]

An international subculture has grown up around the exploration of stormwater drains. Societies such as the Cave Clan regularly explore the drains underneath cities. This is commonly known as "urban exploration", but is also known as draining when in specific relation to storm drains.

In several large American cities, homeless people live in storm drains.[citation needed] At least 300 people live in the 200 miles of underground storm drains of Las Vegas, many of them making a living finding unclaimed winnings in the gambling machines.[citation needed] An organisation called Shine a Light was founded in 2009 to help the drain residents after over 20 drowning deaths occurred in the preceding years.[16][17] A man in San Diego was evicted from a storm drain after living there for nine months in 1986.[18] 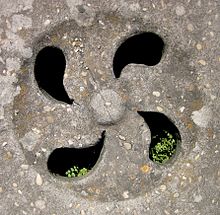 Archaeological studies have revealed use of rather sophisticated stormwater runoff systems in ancient cultures. For example, in Minoan Crete approximately 4000 years before present, cities such as Phaistos were designed to have storm drains and channels to collect precipitation runoff. At Cretan Knossos, storm drains include stone lined structures large enough for a person to crawl through.[19] Other examples of early civilizations with elements of stormwater drain systems include early people of Mainland Orkney such as Gurness and the Brough of Birsay in Scotland.