Crinum bulbispermum is a herbaceous plant native to South Africa. It is naturalized in other parts of the world, such as southern North America.

Bulbs large with strap shaped leaves, 50–88 cm long. Flowers are borne on a scape 40–75 cm tall, in umbels with 8–13-flowers. Flowers are sickly-sweet scented, usually pink with a deep pink or red midstripe, but can range from white to red, funnel shaped. Flowering takes place in spring and summer. The plant thrives in wet places. 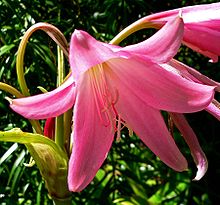 There are some cultivars in cultivation:

The species has also been used in a number of hybrids commonly cultivated.

One of the most commonly cultivated species. Grown as an ornamental plant for its beautiful flowers. Best grown in deep soils that receive and hold a lot of water during the growing season. Should be left to grow in the same place without disturbance for many years. They require full sun. They also make good container plants. Hardy to USDA zone 6 or -10°C if the bulb is protected. Propagated by division or seeds. Seedlings will flower in their third or fourth year.