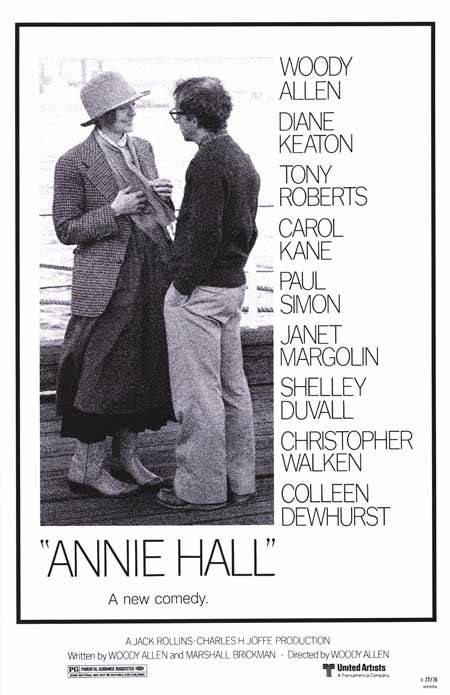 "Annie Hall" is a 1977 directed by from a script he co-wrote with . It is one of Allen's most popular films: it won numerous awards at the time of its release, including four , and in 2002 referred to it as "just about everyone's favorite Woody Allen movie".

The film is set in and Los Angeles.

Alvy Singer () is a neurotic comedian, attempting to maintain a relationship with the seemingly ditzy but exuberant Annie (). The film chronicles their relationship over a few years, intercut with various fantasy trips into each other's history (Annie is able to "see" Alvy's family when he was only a child, and likewise Alvy observes Annie's past sexual relationships). In the flashbacks showing Alvy as a child, we learn that he grew up in , his father operated a concession and the family home was located below the Thunderbolt on .

After many arguments and many reconciliations, the two realize they are fundamentally different and split up. Annie moves in with executive Tony Lacey (). Alvy eventually realizes he still loves her and tries to convince her to return with him to New York. He fails and, resignedly, returns home to write a play about their relationship, which ends with him winning Annie back. Later, the two are able to meet on good terms as friends, now with different lovers. Alvy ends the film by musing about how love and relationships are something we all require despite their often painful and complex nature.

Allen's working title for the film was "" (a psychoanalytic term for the inability to experience pleasure from normally pleasurable life events), but this was considered unmarketable, as were Brickman's suggested alternatives, "It Had to Be Jew", "Rollercoaster Named Desire" and "Me and My Goy." ["When the Shooting Stops... The Cutting Begins," by Ralph Rosenblum and Robert Karen, p. 289.] Ultimately "Annie Hall" was settled upon as the release title. Because of biographical similarities between the character Alvy and (including Allen's previous relationship with co-star , whose real name is Diane Hall, and who portrays the character Annie Hall), "Annie Hall" has been widely assumed to be semi-autobiographical. Allen has denied this.

The film was originally intended to be a drama centered on a murder mystery with a comic and romantic subplot, and was filmed that way. According to Allen, the murder occurred after a scene that remains in the film, the sequence in which Annie and Alvy miss the film "Face to Face". After shooting had completed, the film's editor persuaded Woody Allen to cut the mystery plot and make the film a . (Allen would make a murder mystery film many years later, with 1993's "", also starring .)

Similarly, the production of the film was semi-improvisational. For example, in the original script, Alvy didn't grow up under a roller coaster, but while Allen was driving around Brooklyn with his crew, looking for locations, "I saw this roller-coaster, and I saw the house under it. And I thought, we have to use this." The 'house' in question is in fact the Kensington Hotel, which really was located underneath the Thunderbolt roller coaster. [cite web | url = http://www.nyfolklore.org/pubs/voicjl27/dnstate.html |date = Spring-Summer 2001 | title = The House Under the Roller Coaster | publisher = by Steve Zeitlin, "New York Folk Lore Society". | accessdate = 2007-01-23] Another example is the scene in which Alvy sneezes into cocaine, which was purely accidental, but Allen decided to keep it in the movie; when they tested it with audiences they laughed so much that Allen had to add more footage after the scene so they wouldn't laugh through important conversations afterwards. ["When the Shooting Stops... The Cutting Begins," by Ralph Rosenblum and Robert Karen, p. 284-285.]

Allen has said that "Annie Hall" was "a major turning point" both thematically and technically. "I had the courage to abandon... just clowning around and the safety of complete broad comedy. I said to myself, 'I think I will try and make some deeper film and not be as funny in the same way. And maybe there will be other values that will emerge, that will be interesting or nourishing for the audience.' And it worked out very very well."

Allen has also stated that working with cinematographer for the first time on "Annie Hall" helped improve his technical skills, calling Willis "a very important teacher" and a "technical wizard." "Annie Hall" was the first of Allen's films to utilize long takes, where sometimes one shot will continue, unabridged, for an entire scene. Allen has commented, "It just seems more fun and quicker and less boring for me to do long scenes." Film critic cites a study that calculated the average shot length of "Annie Hall" to be 14.5 seconds, while other films made in 1977 had an average shot length of 4-7 seconds. Ebert adds that the long takes add to the dramatic power of the film, saying, "Few viewers probably notice how much of "Annie Hall" consists of people talking, simply talking. They walk and talk, sit and talk, go to shrinks, go to lunch, make love and talk, talk to the camera, or launch into inspired monologues like Annie's free-association as she describes her family to Alvy. This speech by Diane Keaton is as close to perfect as such a speech can likely be... all done in one take of brilliant brinksmanship." As detailed in the book "When the Shooting Stops... The Cutting Begins," written by the film's editor, Ralph Rosenblum, with Robert Karen, the trick to editing "Annie Hall" was paring the film down to its essential. The first rough cut was two hours and twenty minutes long; various subplots, background scenes and flashbacks-within-flashbacks were deleted to focus on the love story.

The film also breaks with conventional realism: characters frequently break the "" by addressing the camera directly, and Allen makes use of split-screen imagery, double exposure, and subtitles expounding the characters' real thoughts (in contrast to the dialogue). In one scene, Allen's character, standing in a cinema queue with Annie and listening to someone behind him expound on 's work, leaves the line to speak to the camera directly. The man then speaks to the camera in his defense, and Allen resolves the dispute by pulling McLuhan himself from behind a free-standing movie posterboard to tell the man that his interpretation is wrong. Another scene is animated, featuring a cartoon Allen and the Wicked Queen from "Snow White". In another scene Allen's character again addresses the audience, and then stops several passers-by to ask questions about love. Woody Allen chose to have Alvy break the fourth wall, he explained, "because I felt many of the people in the audience had the same feelings and the same problems. I wanted to talk to them directly and confront them."

Another notable scene is where Alvy, Annie, and Rob visit Alvy’s childhood as adults, a narrative technique that Allen’s idol, , used in "Wild Strawberries", one of Bergman’s most famous and most acclaimed films, and a technique he would use again in "", where the main character, Judah () would visit his childhood and ask his father, a rabbi, ethical questions about a crime he’d just committed. Similarly the school scenes in the beginning of the film were influenced by another idol of Allen’s, , whose "" "Annie Hall" owes a great debt to.

The film has no score and very little background music; Allen has said that this was also the (temporary) influence of Bergman, who had described the usage of music in films as 'barbaric' [ [http://www.youtube.com/watch?v=O2CBqkhcgxI 1994 South Bamk Show interview] ] . The few instances of music include a boy's choir Christmas melody played while the characters drive through Los Angeles, the Molto allegro from the Jupiter Symphony by heard as Annie and Alvy drive through the countryside, Annie's two performances at the jazz club; Annie's song is also reprised in the film's final scene; and there is a version of the song "A Hard Way to Go" playing in the character's mansion during a party.

*Woody Allen, however, did not attend the Academy Awards ceremony for "Annie Hall", claiming that the awards meant nothing to him.

* In 1992, this film was selected for preservation in the United States by the as being "culturally, historically, or aesthetically significant".
* Zagat Survey Movie Guide (2002) ranks "Annie Hall" one of the top ten comedies of all time, one of the top ten movies of the 1970s and as Allen's best film as a director.
* In 2000, readers of "" magazine voted it the forty-second greatest comedy film of all time.
* The film is number 28 on Bravo's 100 Funniest Movies.
* In June 2008, AFI revealed its "Ten top Ten"—the best ten films in ten "classic" American film genres—after polling over 1,500 people from the creative community. "Annie Hall" was acknowledged as the second best film in the romantic comedy genre. [cite web| title = AFI Crowns Top 10 Films in 10 Classic Genres | publisher= | date = | url = http://www.afi.com/10top10/romanticcomedy.html| accessdate= 2008-06-18]

Allen says he gets approached "all the time" about making a sequel to "Annie Hall", [cite web |first=Peter |last=Biskind |title=Reconstructing Woody |work=Vanity Fair |url = http://www.vanityfair.com/culture/features/2005/12/woodyallen200512?currentPage=1 |date=2005-12 |accessdate=2007-01-23] but has repeatedly declined. However, he admitted in a 1995 interview that for a time he considered it, saying,

"Annie Hall"'s mix of relatively realistic scenes and surreal flights of fancy was highly influential on later films including "", "", and "High Fidelity". The late-1980s TV series "thirtysomething" was one of many shows that would break away from more realistic, dramatic scenes for comic trips into the imagination of the characters, while "", "" and many others also featured the main character looking into the camera and speaking directly to the audience, breaking the "fourth wall".Fact|date=July 2008

Influential alternative rock band Jawbreaker used a sample of Duane telling Alvy about his disturbing visions of crashing his car in their song, "Jet Black" on their final album, .

, in the song "Antonia" on the album , briefly mentions the film, saying Joshua Cain's wife frequently quotes it.

In the "" episode, "Kitty and Eric's Night Out", they go and see the movie, and discuss the amounts of adult material within the film. Later, Eric and Donna have a moment where there are acting like Alvy and Annie.

The film also had an influence on the fashion world during the late-70s, with countless women adopting Keaton's distinctive "look" in the film, layering oversized, mannish blazers over vests, billowy trousers or long skirts, and boots. Keaton's wardrobe also included a tie by . The look was often referred to as the "Annie Hall" look".

Allen recalled that Keaton's natural fashion sense almost did not end up in the film. "She came in," he recalled in 1995, "and the costume lady on "Annie Hall" said, 'Tell her not to wear that. She can't wear that. It's so crazy.' And I said, 'Leave her. She's a genius. Let's just leave her alone, let her wear what she wants.'