Mao is a city in Chad, the capital of the Kanem Region and of the department also named Kanem.

As in other Chadian regions, Mao is ruled by both a traditional Sultan and by central government officials. Moves toward decentralization have been stymied by the complex and sometimes tense relationships between traditional rulers in Chad and national authorities. 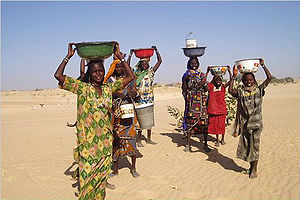 Water is provided by a water tower, built by GTZ, a German NGO, in the late 1980s.

On the border of the Sahara, Mao's geography is marked by sand dunes and sparse vegetation.

A large majority of Mao's residents are Muslim. However, there are two Christian churches (one Catholic and one Protestant) in Mao.

The town has a small airport (IATA: AMO, ICAO: FTTU), with a paved runway.