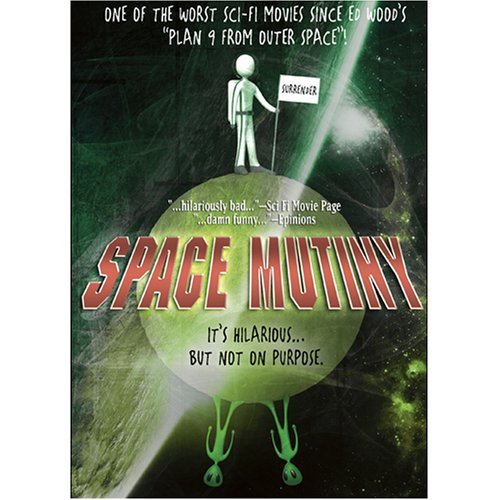 "Space Mutiny" (also known as "Mutiny in Space") is a South African science-fiction about a aboard the spaceship known as the "Southern Sun".

The "Southern Sun" is a seedship, or a spacefaring vessel that contains large amounts of people, whose mission is to colonize a new world. Its voyage has lasted generations, so many of its inhabitants have been born and will die without ever setting foot on solid ground. This does not please the antagonist, Elijah Kalgan, who conspires with the pirates infesting the nearby system and the ship’s Chief Engineer MacPhearson. Kalgan hatches a plot to disrupt the Southern Sun’s navigation systems and use the Enforcers, the ship’s force, to hijack the ship and direct it towards this system. At this point, the inhabitants of the "Southern Sun" will have no choice but to accept his “generosity.”

Kalgan sabotages a key part of the ship just as an important professor’s shuttle is on a landing trajectory. The loss of guidance control causes the ship to explode. The ship’s pilot, Dave Ryder, is able to escape, but the professor dies in the explosion. This sabotage seals off the flight deck for a number of weeks, which gives Kalgan the opportunity to attempt to wrest control. With the Enforcers in his hand, and with the flight deck out of commission, he holds the entire population of the "Southern Sun" hostage. Commander Jansen and Captain Devers enlist Ryder’s assistance, aided begrudgingly by Jansen’s daughter Dr. Lea Jansen, to regain control of the ship.

Mirroring the romantic relationship of Brown and Cameron's characters, the actors themselves were married sometime after the film was finished.

It is noted that the soundtrack sounds remarkably similar to the song, "", using s to replicate choir.

Nine years after its initial release, "Space Mutiny" was lampooned in a November 1997 episode of movie-mocking television comedy series "" {MST3K). The movie’s editing flaws, stilted dialog, and poor production lent itself well to the "MST3K" treatment, and it has repeatedly proved to be one of the most popular episodes, released as part of the "MST3K DVD Collection, Vol. 4" from .

Mike Nelson, and 's arsenal of jokes include poking fun at Commander Jansen's resemblance to and , Captain Devers resemblance to Sting, and to the obvious fact that the actress playing Lea is much older than her character is meant to be (they refer to her as Jansen's "Grandma-daughter") The film's numerous battles feature casualties that fall over railings as they die, so Mike and The Bots often reference them as "railing kills" (Prompting Tom to fill the 'Satellite of Love' with railings). Many of the Enforcers are portrayed as homosexual, and two were compared to while another was repeatedly mocked for his -like hairstyle. They also make up numerous fake bodybuilder names for the muscular hero Ryder, including, among others, Slab Bulkhead, Fridge Largemeat, Bolt van der Huge, Stump Beefknob, Crud Bonemeal, Crunch Buttsteak, Blast Hardcheese, Gristle McThornbody, Big McLargeHuge, Buff Drinklots, Bob Johnson (accidentally), Punch Rockgroin, and Roll Fizzlebeef, and make fun of the way he screams. Kalgan's frequent maniacal laughter is also a source of entertainment, as is the lobster-red armor his bodyguard wears.

Two actors featured in the film made appearances in other films that were featured on the show. , who appeared in this movie as the villain Elijah Kalgan, also starred in "", which was featured in the series finale. Cameron Mitchell, who played Commander Jansen, also appeared in another "MST3K" episode, season three's "". He is not the only member of the Mitchell family to be involved in "Space Mutiny"; his daughter provided the voice for Jennara, the lead Bellarian; his son Chip Mitchell played Blake, a mustachioed member of Kalgan’s crew (in an early scene he is shown apologizing because "the information’s so scanty").

Despite comments made during the "MST3K" episode, in which Servo states that this movie is very good at "tossing around" and that the movie is "rife with the stench of back-bacon", the movie was not made in , but rather in during the period. The accents of several characters are due to this. The only black person on screen is one of the bodies 'on ice'.

Some ten minutes of footage were cut from "Space Mutiny" for its use on "MST3K". Much of the edited footage featured space battle scenes taken from the original television series of "Battlestar Galactica". [cite book
title= An Analytical Guide to Television's Battlestar Galactica: An Episode Guide and Analysis of the 1978 Science Fiction Television Series and Its Short Lived Sequel, "Galactica: 1980"
first= John Kenneth
last= Muir
publisher= McFarland
origyear 1999
isbn= 0786404418
pages= p146
chapter= In 1997, Mike, Crow and Servo watched Space Mutiny ] The version of the film featured in the episode was, in essence, consistent with the full version; the discontinuities apparent in the episode were all present in the 1988 film.

"MST3K" viewers found it odd that Mike Nelson and the 'bots did not comment on the reused "Battlestar Galactica" footage. writer Paul Chaplin acknowledged the omission, but did not provide an explanation.

Mike makes a reference to , a Vietnamese who set himself on fire in protest of the South Vietnamese government's treatment of Buddhists. At one point in the movie, Ryder fires a laser bazooka at Kalgan, but hits one of his henchmen, setting him on fire. When Kalgan kicks the man out of his way, Mike screams, "Stupid ! The 's been over for hundreds of years!"

Mike and the Bots also mock the fact that a character killed on screen blatantly shows up as an extra in later scenes (see above).