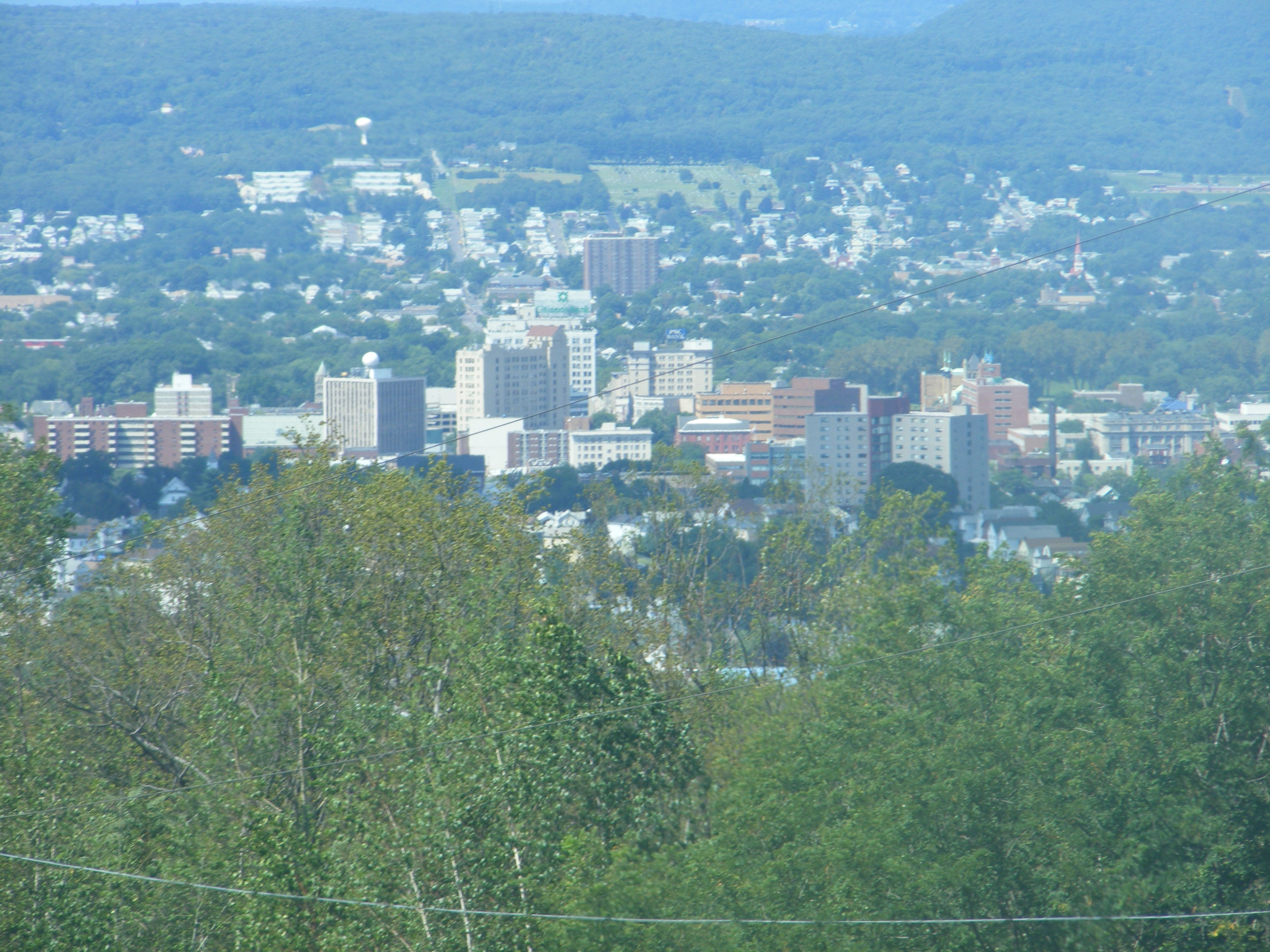 Wilkes-Barre (IPAEng|ˈwɪlksbɛrə or IPA|/-bɛri/) is the central city of the and of Luzerne County in northeastern . Founded in and formally incorporated in , the city has an estimated population of 43,123, according to the 2000 census.

The city and are framed by the Pocono Mountains to the east, the to the west and the to the south. The flows through the center of the valley and defines the northwestern border of the city.

The Wyoming Valley was first inhabited by the and Delaware Indian tribes in the early . By 1769, a group, led by John Durkee, became the first Europeans to reach the area. The settlement was named Wilkes-Barre, after and , two British members of Parliament who supported .

The initial settlers were aligned with , which had a claim on the land that rivaled Pennsylvania's. Armed men loyal to Pennsylvania twice attempted to evict the residents of Wilkes-Barre in what came to be known as the . After the , the conflict was resolved so that the settlers retained title to their lands but transferred their allegiance to Pennsylvania.

Wilkes-Barre's population exploded due to the discovery of in the 1800s, which gave the city the nickname of "The Diamond City." Hundreds of thousands of immigrants flocked to the city, seeking jobs in the numerous mines and collieries that sprung up.

The coal industry survived several disasters, including an explosion at the Baltimore Colliery in 1919 that killed 92 miners, but it could not survive the gradual switch to other energy sources. Most coal operations left Wilkes-Barre by the end of , and the 1959 marked the end of King Coal's heyday. The city entered into a decades-long decline, hastened by in 1972.

Manufacturing and retail remained Wilkes-Barre's strongest industries, but the city's economy took a major blow from Tropical Storm Agnes in 1972. The storm pushed the to a height of nearly 41 feet, four feet above the city's levees, flooding downtown with nine feet of water. Six people were killed, 25,000 homes and businesses were either damaged or destroyed, and damages were estimated to be $1 billion, with President sending aid to the area.

Throughout the 1970s and 1980s, Wilkes-Barre attempted to repair the damage from Agnes by building a levee system that rises 41 feet; it has successfully battled less threatening floods of 1996, 2004, and 2006, and the has praised the quality of the levees.

On , , unveiled his "I believe..." campaign for Wilkes-Barre, which was intended to boost the city's spirits. Construction began on a planned downtown theatre complex which had a grand opening on , , and renovation of the landmark was being pursued by CityVest, a nonprofit developer. The expansion of and King's College has taken place. Also, the canopy and matching street lights in Public Square and across downtown were removed; the replacements are new green lampposts.

In 2006, the City of Wilkes-Barre celebrated its 200th anniversary. There were several events which were scheduled to commemorate this occasion over the July 4 weekend, including a free concert with the in the City's Kirby Park. However, due to extremely heavy rains, the Susquehanna River crested high enough that most of the City had to be evacuated on June 28, 2006, forcing the cancellation of the events. Afterwards, the City rescheduled their Blastoff, their Bicentennial Parade and the Bicentennial Gala to different dates throughout August. The Beach Boys graciously rescheduled their concert and played a concert on Weekend, Sunday September 3, 2006, attended by Pennsylvania Governor .

The city is headed by a , elected to a four-year term. The current mayor is Tom Leighton, a Democrat who was elected in 2003.

The City of Wilkes-Barre is served by two City Attorneys, Timothy Henry, Esquire and William E. Vinsko, Jr., Esquire, who advise both the Mayor and City Council.

The Luzerne County Court of Common Pleas is the trial court of general jurisdiction for Wilkes-Barre. Its system is divided into two divisions; one for adults, and one for juveniles.

The for the Middle District of Pennsylvania sits at the in downtown Wilkes-Barre on South Main Street. The Chief Judge of the Bankruptcy Court, John J. Thomas, is son of Thomas C. Thomas, a prominent produce dealer whose terminal remains a prominent part of the Wilkes-Barre skyline.

The local accent of is .

Interstate 81 passes north-south near Wilkes-Barre, and the city is also located near the Northeast Extension of the and is north of Interstate 80.

Public transportation is provided by the Luzerne County Transportation Authority. In addition to servicing the main arteries of the city, it provides transportation for the northern half of the county, as well as a connecting bus to via an interchange at with COLTS, the public transit authority of Lackawanna County.

Five international airlines fly from the in nearby Avoca. Smaller, private planes may also use the in Forty Fort.

The city was at one time served by the , , the (later ), , the , the , and the (known as the Laurel Line). The Wilkes-Barre Traction Company formed a streetcar line from Georgetown to Nanticoke and over the river into Plymouth ceasing operations in the mid 1940s. At present, the (successor to the Delaware and Hudson) and the Luzerne & Susquehanna Railroad (designated-operator of a county-owned shortline) provide freight service within the city.

* recognizes Wilkes-Barre as the birthplace of modern cable programming. In November 1972, coincidentally the autumn that followed Hurricane Agnes, 365 subscribers of Service Electric Cable were the first to receive HBO's service.
* Wilkes-Barre was a stop on the before the Civil War.
* Louis Philippe, the King of France from 1830 to 1840, stayed in Wilkes-Barre while traveling en route to the French Asylum settlement in 1797.
* Wilkes-Barre has been a popular stop for many presidential candidates: U.S. presidents , , , , , , , , and .
*Described by many today as one of America's more "historical cities", Wilkes-Barre has gained considerable bad press (although it is not a major nationally recognized location) since the . In the 1960 presidential campaign, it garnered attention for its high levels of poverty. In 1972, the damage done by the Agnes flood made international headlines. In the 1990s, the city became known for the poor leadership of Mayor McGroarty. In 2001, a columnist described Wilkes-Barre as "awful" and "next-door" Scranton as "awfuler", describing the area as one of the worst metropolitan areas in the [http://www.washingtonpost.com/ac2/wp-dyn/A31628-2001Nov28] . In 2006, the city made the front page of national newspapers when 200,000 residents were told to evacuate in the wake of flooding that was forecast to reach levels near that of '72 but fell short of predictions.
* Wilkes-Barre is the birthplace of the Planters Peanuts Company, which was founded in 1906 by Italian immigrant Amedo Obici and partner Mario Peruzzi.

*It is said that one of the longest in history was hit in Wilkes-Barre. This statement is quoted right from the News page:"On October 12, 1926, visited Wilkes-Barre's Artillery Park to play in an exhibition game between and . Suiting up for Hughestown, the Yankee slugger challenged Larksville's hurler to throw him his "best stuff" -- a fastball right down the heart of the plate. Corkran obliged and Ruth crushed the pitch into deep right field. When the ball cleared the fence, a good 400 feet away from home plate, it was still rising. It finally landed in Kirby Park on the far side of a high school running track. Ruth himself was so impressed by the feat that he asked that his homer be measured. Originally estimated at 650 feet, the prodigious blast is considered to be the longest home run in baseball's storied history. [http://www.minorleaguebaseball.com/news/article.jsp?ymd=20070702&content_id=269068&vkey=news_t531&fext=.jsp&sid=t531 Wilkes-Barre/Scranton Yankees]
*The Wilkes-Barre variation (or Traxler variation, as it is more commonly known) of the Two Knights' Defense is named for the Wilkes-Barre club, see [http://www.uschess.org/cc/dunne/alex_9805.html| this article by Alex Dunne] .
* Bingo was popularized after a Wilkes-Barre church preacher approached the game's developer complaining that the original game was not random enough in its potential picks to limit winners. The resulting improvements, in response to that complaint, led directly to the cultural success of the game. [http://www.strangelife.com/bingodoc/bingohist.html See history of Bingo] .