Lackawanna County is a county in the U.S. state of Pennsylvania. It lies at the northern edge of the Coal Region, northwest of the Poconos. It was created on August 13, 1878, from part of Luzerne County and is Pennsylvania's most recently established county. It is named for the Lackawanna River. The county has a population of 214,437 as of 2010 and its county seat is Scranton. 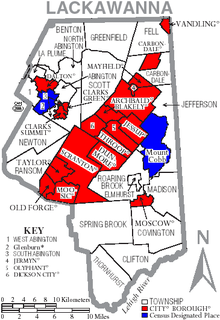 Under Pennsylvania law, there are four types of incorporated municipalities: cities, boroughs, townships, and, in at most two cases, towns. The following cities, boroughs and townships are located in Lackawanna County:

The Democratic Party has been historically dominant in county-level politics.[citation needed] On the state and national levels, Lackawanna County leans toward the Democratic Party. In 2000, Democrat Al Gore won 60% of the vote and Republican George W. Bush won 36%.[5] In 2004, Democrat John Kerry received 56% of the vote and Bush received 42%.[6] In 2006, Democrats Governor Ed Rendell and Senator Bob Casey, Jr. won 70% and 73% of the vote in Lackawanna County, respectively.[7] In 2008, three of four Democrats running statewide carried the county, with Barack Obama receiving 63% of the county vote to 37% for John McCain.[8] 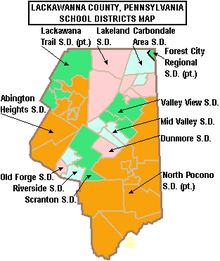 The county is also served by the Diocese of Scranton. The Diocese of Scranton operates four regional systems of diocesan schools. The Holy Cross School System serves Lackawanna County, and is currently composed of seven elementary centers and one secondary center. The Holy Cross System is the second-largest of the four systems, and Holy Cross High School is the only diocesan high school operating a capacity. The Holy Cross System is the result of diocesan-wide consolidations made in 2007 in response to decades of declining enrollment. As recently as 2000, Lackawanna County was home to four high schools and nearly fifteen elementary schools. While the current configuration of sites and schools educates a fraction of the students once enrolled in Catholic schools in Lackawanna County, vast improvements have been made to the curriculum, and millions of dollars of capital gains have been invested in the buildings and technologies of the schools. As part of the ongoing effort to stabilize enrollment and offer a sustainable school system which is "spiritually sound and academically excellent," the Holy Cross System is embarking on a more aggressive advertising campaign to promote Catholic education and establish stronger and more diverse programs at the elementary level. Additionally, Sacred Heart Elementary in Carbondale and Marian Catholic Elementary in Scranton will close next year and be incorporated into LaSalle Academy and All Saint's Academy, respectively. This will cut the costs of sustaining two faculties and buildings which currently operate at less than fifty-percent capacity collectively, and bolster the enrollments of the hubs of elementary education.

As reported by the National Center for Educational Statistics of the US Department of Education.[9]