Infobox Film
name = For the Boys 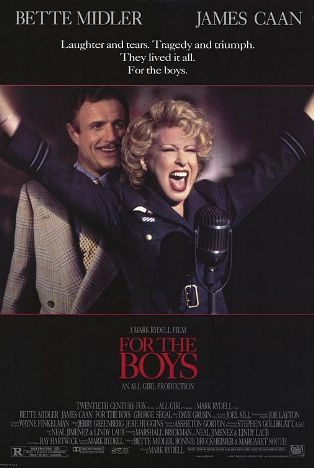 "For the Boys" is a 1991 which tells the story of an 1940s actress/singer who teams with a famous performer to entertain American troops. The film traces her life through 50 years. The original music score was composed by .

The movie was adapted by , Neal Jimenez and Lindy Laub from a story by Jimenez and Laub. It was directed by . It stars , , , , , and .

Bette Midler was nominated for the for her performance. The movie soundtrack features adaptations of many classic songs, including "", "" by , "P.S. I Love You", "", "Every Road Leads Back To You" and ' "". Many of these have lyrics by .

In the early 1990s, retired entertainer Dixie Leonard (Midler) has a commitment to attend a Hollywood ceremony being televised live to honor her and longtime show-biz partner Eddie Sparks (Caan).

When a young man from the TV show comes to pick her up, Dixie balks. She explains what brought Eddie and her together and drove them apart. The bulk of the film is an extended .

Dixie tells the story of how during , she received an offer to go overseas and become a part of Eddie's act in entertaining the troops. Dixie is an immediate hit with the boys in uniform, but Eddie wants her gone because he finds her kind of humor too coarse. Dixie doesn't care for him much either, but fellow entertainers and her joke-writer uncle (Segal) convince her to stay.

Eddie wins her over, particularly by reuniting Dixie with her soldier husband on stage. Later in the war, however, Dixie's husband is killed in action.

Despite her distaste for Eddie, she continues working with him back in the U.S. to support herself and her son. Eddie is married with daughters, but treats Dixie's son as if his own.

The two bickering performers go overseas twice more to entertain the troops in the and the . They endure the horrors of combat, the sin of temptation, the taint of and, ultimately, the death of Dixie's son in Vietnam.

Dixie has not forgiven Eddie for his part in all this. But, at the last minute, because he speaks of their joined loss in Viet-nam, she consents to join him on stage for one last song and dance.

*Many of the U.S. Marines from were going to be used as extras in some scenes. Unfortunately, Operation Desert Shield started and many of them had to be shipped to the . Producers had to hire clean-cut civilians to fill the ranks.
*After the release of the movie, Martha Raye claimed publicly that the character Bette Midler portrayed was a rip-off of her own career and especially the efforts she had made during several wars. Raye claimed she would seek legal compensation for this but the matter was never settled.
*Many reviewers noted that James Caan seemed miscast in the role of comedian Eddie Sparks (a caricature of Bob Hope) and wondered why co-star George Segal, who as an actor had proved equally adept at comedy and drama, wasn't cast in the role instead. The truth is that Caan's career was hot again after the success of "Misery" (1990) and Segal was not, so Caan got the lead and Segal the supporting role. [ [http://www.imdb.com/title/tt0101902/trivia For the Boys (1991) - Trivia ] ]