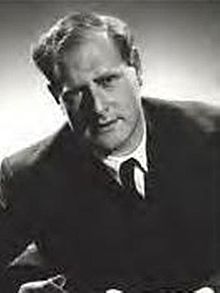 Norman Del Mar CBE (31 July 1919 – 6 February 1994) was a British conductor, horn player, and biographer. As a conductor, he specialized in the music of late romantic composers; including Edward Elgar, Gustav Mahler, and Richard Strauss. He left a great legacy of recordings of British music, in particular Elgar, Vaughan Williams, Delius, and Britten. He notably conducted the premiere recording of Britten's children's opera Noye's Fludde.

Born in Hampstead, London, Del Mar began his career as a horn player. He was one of the original members of the Royal Philharmonic Orchestra (RPO) which was established by Sir Thomas Beecham in 1946. Within the first few months of the RPO's existence, Beecham appointed Del Mar as his assistant conductor. Del Mar made his professional debut as a conductor with the RPO in 1947.[1]

He was an authority on Richard Strauss and wrote a three-volume work on Strauss's life and music. In addition, his books include the following titles:

As well as making approximately 70 recordings of his own, Del Mar was a lifelong record collector, and his extensive collection of rare 78s is held by the University of Southampton.