The Personal History, Adventures, Experience and Observation of David Copperfield the Younger of Blunderstone Rookery (Which He Never Meant to Publish on Any Account),[1] commonly referred to as David Copperfield, is the eighth novel by Charles Dickens, first published as a novel in 1850. Like most of his works, it originally appeared in serial form a year earlier. Many elements within the novel follow events in Dickens' own life, and it is probably the most autobiographical of all of his novels.[2] In the preface to the 1867 Charles Dickens edition, he wrote, "… like many fond parents, I have in my heart of hearts a favourite child. And his name is David Copperfield." [3] 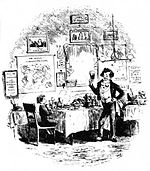 "The friendly Waiter and I"

The story traces the life of David Copperfield from childhood to maturity. David is born in England in 1820. David's father had died six months before he was born, and seven years later, his mother re-marries Mr. Edward Murdstone. David is given good reason to dislike his stepfather and has similar feelings for Mr Murdstone's sister Jane, who moves into the house soon afterwards. Mr Murdstone thrashes David for falling behind with his studies. Following one of these thrashings, David bites him and soon afterward is sent away to a boarding school, Salem House, with a ruthless headmaster, Mr. Creakle. Here he befriends James Steerforth and Tommy Traddles, both of whom become significant later on in the novel.

David returns home for the holidays to find out that his mother has had a baby boy. Soon after David goes back to Salem House, his mother and her baby die and David has to return home immediately. Mr Murdstone sends him to work in a factory in London, of which Murdstone is a joint owner. The grim reality of hand-to-mouth factory existence echoes Dickens' own travails in a blacking factory. Copperfield's landlord, Mr Wilkins Micawber, is sent to a debtor's prison (the King's Bench Prison) after going bankrupt and remains there for several months before being released and moving to Plymouth. No one remains to care for David in London, so he decides to run away.

He walks all the way from London to Dover, where he finds his only relative, aunt Miss Betsey Trotwood. This eccentric aunt agrees to raise him, despite Mr Murdstone's attempt to regain David's custody. David's aunt renames him 'Trotwood Copperfield', shortened to "Trot", and for the rest of the novel David is called by either name, depending on whether he is communicating with someone he has known for a long time or someone he has only recently met.

The story follows David as he grows to adulthood and is enlivened by the many well-known characters who enter, leave, and re-enter his life. These include Peggotty--his mother's faithful former housekeeper--and Peggotty's family, including her orphaned niece "Little Em'ly", who moves in with them and charms the young David. David's romantic but self-serving school friend, Steerforth, seduces and dishonors Little Em'ly, precipitating the novel's greatest tragedy, and his landlord's daughter and "angel in the house," Agnes Wickfield, becomes his confidante. The novel's two most familiar characters are David's sometime-mentor, the debt-ridden Micawber, and the devious and fraudulent clerk, Uriah Heep, whose misdeeds are eventually revealed with Micawber's assistance. Micawber is painted sympathetically even as the narrator deplores his financial ineptitude. Micawber, like Dickens's own father, is briefly imprisoned for insolvency.

In typical Dickens fashion, the major characters eventually get some measure of what they deserve, and few narrative threads are left hanging. Dan Peggotty safely transports Little Em'ly to a new life in Australia; accompanied by Mrs. Gummidge and the Micawbers. All eventually find security and happiness in their adopted country. First, David marries the beautiful but naïve Dora Spenlow, who dies after failing to recover from a miscarriage early in their marriage. David then searches his soul and marries the sensible Agnes, who had always loved him and with whom he finds true happiness. David and Agnes then have several children, including a daughter named for Betsey Trotwood.

The story is told almost entirely from the point of view of the first person narrator, David Copperfield himself, and was the first Dickens novel to be written as such a narration.

Critically, it is considered a Bildungsroman--i.e., a novel of self-cultivation--and would be included in the same genre as Dickens's own Great Expectations (1861), Charlotte Brontë's Jane Eyre, Thomas Hardy's Jude the Obscure, Samuel Butler's The Way of All Flesh, H. G. Wells's Tono-Bungay, D. H. Lawrence's Sons and Lovers, and James Joyce's A Portrait of the Artist as a Young Man.

Tolstoy regarded Dickens as the best of all English novelists and considered Copperfield his finest work, ranking the "Mischief" chapter (chapter 42, the story of David's dreams) the standard by which the world's great fiction should be judged. Henry James remembered hiding under a small table as a boy to hear its instalments read aloud by his mother. Dostoyevsky read it enthralled in a Siberian prison camp. Franz Kafka called his own first novel Amerika "sheer imitation" of David Copperfield. James Joyce paid it reverence through parody in Ulysses. G. K. Chesterton considered Copperfield "the best of all Dickens's books". Virginia Woolf, who otherwise betrayed little regard for Dickens, confessed the durability of this one novel, for it belongs, she said, to "the memories and myths of life". The book was also Sigmund Freud's favourite novel. 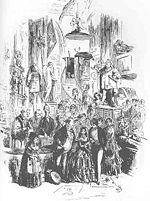 "I am married". Etching by Phiz.

David Copperfield has been filmed on several occasions:

The numerous television adaptations of the novel include a 1966 version with Ian McKellen as David and a 1999 version with Daniel Radcliffe (of the Harry Potter film series) playing the younger David and Ciaran McMenamin as the older David. In this latter version, McKellen returns, this time playing the horrendous schoolmaster Creakle. There was a musical animated version in 1993, where the cast was animorphic animals (similar to Disney's Robin Hood) and starred Julian Lennon as the voice of David (a cat). A 2000 American TV film version featured Sally Field, Anthony Andrews, Paul Bettany, Edward Hardwicke, Michael Richards and Nigel Davenport with Hugh Dancy and Max Dolbey as the adult and boy Copperfield, respectively.

A play adaptation by Andrew Halliday was warmly approved by Dickens himself, and enjoyed a long run at Drury Lane.[citation needed] The novel was adapted for the unsuccessful musical Copperfield in 1981. Other versions were played in the early-twentieth century by the actor-managers Evelyn Millard and Bransby Williams (1923).

Like most of Charles Dickens's novels, David Copperfield was published in 19 monthly one-shilling instalments, containing 32 pages of text and two illustrations by Hablot Knight Browne ("Phiz"), with the last being a double-number:[citation needed]