Chaïm Soutine (January 13, 1893 – August 9, 1943) was a Jewish painter from Belarus. Soutine made a major contribution to the expressionist movement while living in Paris.

Inspired by classic painting in the European tradition, exemplified by the works of Rembrandt, Chardin[1] and Courbet Soutine developed an individual style more concerned with shape, color, and texture over representation, which served as a bridge between more traditional approaches and the developing form of Abstract Expressionism.

Soutine was born in Smilavichy near Minsk, (modern day) Belarus (then part of the Russian Empire). He was the tenth of eleven children. From 1910–1913 he studied in Vilnius at the Vilna Academy of Fine Arts. In 1913, with his friends Pinchus Kremegne (1890–1981), and Michel Kikoine (1892–1968), he emigrated to Paris, where he studied at the École des Beaux-Arts under Fernand Cormon. He soon developed a highly personal vision and painting technique.

For a time, he and his friends lived at La Ruche, a residence for struggling artists in Montparnasse where he became friends with Amedeo Modigliani (1884–1920). Modigliani painted Soutine's portrait several times, most famously in 1917, on a door of an apartment belonging to Léopold Zborowski (1889–1932), who was their art dealer.[2] Zborowski supported Soutine through World War I, taking the struggling artist with him to Nice to escape the German bombing of Paris. 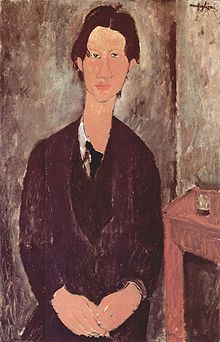 After the war Paul Guillaume, a highly influential art dealer, began to champion Soutine's work. In 1923, in a showing arranged by Guillaume, the prominent American collector Albert C. Barnes (1872–1951), bought 60 of Soutine's paintings, on the spot. Soutine, who had been virtually penniless in his years in Paris, immediately took the money, ran into the street, hailed a Paris taxi, and ordered the driver to take him to Nice, on the French Riviera, nearly 200 miles away.

Soutine once horrified his neighbours by keeping an animal carcass in his studio so that he could paint it (Carcass of Beef). The stench drove them to send for the police, whom Soutine promptly lectured on the relative importance of art over hygiene. Soutine painted 10 works in this series, which have since became his most iconic. His carcass paintings were inspired by Rembrandt's still life of the same subject, which he discovered while studying the Old Masters in the Louvre. In February 2006, the oil painting of this series 'Le Boeuf Écorché' (1924) sold for a record £7.8 million ($13.8 million) to an anonymous buyer at a Christies auction held in London - after it was estimated to fetch £4.8 million.

Soutine produced the majority of his works from 1920 to 1929. From 1930 to 1935, the interior designer Madeleine Castaing and her husband welcomed him home during the summer in their mansion of Lèves, becoming his patrons, so that Soutine could hold his first exhibition in Chicago in 1935. He seldom showed his works, but he did take part in the important exhibition The Origins and Development of International Independent Art held at the Galerie nationale du Jeu de Paume in 1937 in Paris, where he was at last hailed as a great painter. Soon thereafter France was invaded by German troops. As a Jew, Soutine had to escape from the French capital and hide in order to avoid arrest by the Gestapo. He moved from one place to another and was sometimes forced to seek shelter in forests, sleeping outdoors. Suffering from a stomach ulcer and bleeding badly, he left a safe hiding place for Paris in order to undergo emergency surgery, which failed to save his life. On August 9, 1943, Chaim Soutine died of a perforated ulcer. Soutine was interred in Cimetière du Montparnasse, Paris.

In February 2006, an oil painting of his controversial and iconic series Le Boeuf Ecorche (1924) sold for a record £7.8 million ($13.8 million) to an anonymous buyer at a Christie's auction held in London - after it was estimated to fetch £4.8 million. In February 2007, a 1921 portrait of an unidentified man with a red scarf (L'Homme au Foulard Rouge) by Chaim Soutine sold for $17.2 million - a new record - at Sotheby's London auction house.

In May 2009, a unique and unusual settlement regarding Chaim Soutine’s iconic painting entitled Piece de Boeuf (Piece of Beef c. 1923) was approved by Judge Laura Taylor Swain of the Southern District of New York. Pursuant to the settlement, the painting was returned to the Shefner Family in resolution of litigation commenced against the National Gallery of Art in Washington, D.C., Maurice Tuchman and Esti Dunow, the authors of the Soutine Catalogue Raisonnée. The settlement was believed to be the first time that the National Gallery of Art had deaccessioned a non-Holocaust work of art from its permanent collection. The parties agreed that the painting would remain on loan to the National Gallery of Art for the benefit of the American public for the near future.[3]

Some years after Soutine's death, Roald Dahl let him play a role in his short story Skin.

A few of his paintings: