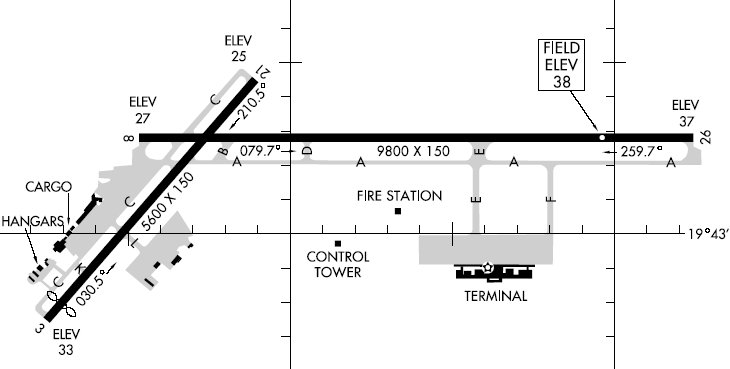 Hilo International Airport Airport codes|ITO|PHTO, formerly General Lyman Field, is a public of the state of Hawai'i in Hawai'i County two miles (3 km) east of the unincorporated area of Hilo in . Most flights to Hilo International Airport are from by the three major Hawai'i-based carriers: , , and . Between April 28, 2006 and April 2, 2008, provided daily non-stop service from , to Hilo aboard its Boeing 737-800 aircraft, re-establishing direct service from the mainland to Hilo for the first time since 1986.

Hilo International Airport is served by two runways, Runway 8/26 and Runway 3/21. Runway 8/26 is convert|9800|ft|m long and is used for major air carrier operations including the take-off and landing of major commercial jetliners. Runway 3/21 is convert|5600|ft|m long and is used for general aviation operations including take-off and landing of smaller commuter airplanes.

The main passenger terminal has seven jet bridges and serves all major passenger airlines. All flights operated by Mokulele Airlines depart and arrive from the commuter terminal. Each airline is assigned one gate; Gates 3, 6, 7, and 9 are currently unused.

Hilo International Airport was involved in one major air traffic incident that had caused air traffic controllers and its federal emergency officials to be on emergency special alert.

On , , an operating Flight 243 from General Lyman Field (as Hilo International Airport was known then) to Honolulu International Airport carrying 89 passengers and 6 crew members experienced rapid decompression when an convert|18|ft|m section of the fuselage roof and sides were torn from the airplane. One flight attendant was sucked out of the airplane and died. Several passengers sustained life-threatening injuries including instances of massive head wounds. The aircraft declared an emergency and landed at on with slight difficulty.

Investigations of the disaster concluded that the accident was caused by metal fatigue. The disaster caused almost all major United States air carriers to retire their oldest airplane models.