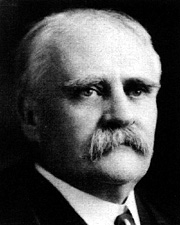 Horace Harmon Lurton (, &ndash; , ) was an American who served for four years as a Justice of the . Appointed at the age of 65, Lurton was the oldest justice appointed to the Court.

Lurton was born in , the son of a physician turned clergyman. He was a in the during the Civil War, serving in the 5th Tennessee Infantry, 2nd Kentucky Infantry, and 3rd Kentucky Cavalry. He was twice captured by Union forces, the second time sent as a to Prison Camp in , . He was later by President Lincoln because of pleas for mercy from his mother.

Before the war, he attended , and then earned an in 1867 at which was then part of , but is now part of . At Cumberland he was a member of . Lurton then practiced law in .

Career as a judge

In 1875, Lurton left private practice after being chosen as a judge of the Tennessee for the Sixth Chancery Division. After three years, Lurton then returned to his practice until 1886, when he was appointed to the . From this position, in 1893, Lurton was appointed by President to a federal appellate judgeship on the U.S. Court of Appeals for the Sixth Circuit. While still on that court, Lurton first taught at, then served as dean of the from 1905 until 1909.

In 1909, Lurton's friend, President , named him to a seat on the Supreme Court that had been vacated by the death of Justice . This was the first of Taft's six Supreme Court appointments, and surprised some observers because unlike Taft, Lurton was a Democrat.

Lurton sided most frequently on the court with

Lurton took his seat on the Court at the beginning of 1910. His tenure on the Court was brief, as he served only four years before dying in , in 1914.

*Lurton was a family friend of noted historian and jurist .

* [http://www.fjc.gov/servlet/tGetInfo?jid=1441 Federal Judicial Center bio of Lurton]
*Irons, Peter. "A People's History of the Supreme Court", p. 260. , 2000. wrote critically of Lurton's lack of impact on American Constitutional Law, even though Lurton only served on the High Court for four years before his death.