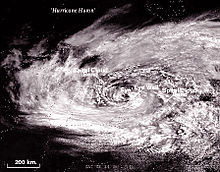 The 1996 Lake Huron cyclone (commonly known as Hurricane Huron, or the Hurroncane) was a strong cyclonic storm system that developed over Lake Huron in September 1996. It had some characteristics of a tropical cyclone.

On September 11, 1996, a weak cyclone was situated close to Lake Superior.[1] Near the surface, a 1012 mbar low existed over Lake Michigan. There was also a 500 mbar shortwave over Ontario. The northwest tilt of the low indicated that the surface center was in a stage of baroclinic development. In addition to this, analysis concluded that the cyclone had a cold core in the mid-troposphere. Analysis at the 700 and 850 millibar levels indicated that the cyclone also had a cold core in the lower troposphere, though a more dense observation would be needed.[1]

The cyclone's height increased with surprising rapidity, as did its overall windspeed, from 11 mph (18 km/h) to 67 mph (108 km/h) up to strong tropical storm wind strength.[1] At the same time, positive vorticity and thermal advection were causing moderate rain showers over Ontario, with a broken area of thunderstorms present in a warm portion of an advancing cold front. By September 12, the cyclone moved southward to a position over Lake Huron, with upper portions centered over Michigan. During this 24-hour period, the cyclone also dropped in pressure from 1012 millibars to 1006. After 1200 UTC September 12, the low moved southeastward and became vertically stacked atop the cyclone from the surface to 500 millibars.[1]

For a brief time, the 300 and 200 mbar levels moved southeastward with the 300 moving over Lake Huron.[1] All levels greater than 200 mbars then fell to mandatory levels, spawning the greatest intensification below the 500 mbar level. In addition to that, the cyclone's tilt was neutral, meaning that the storm was in the occlusions stage of baroclinic development. As the cyclone proceeded through this stage, the cold front, which was attendant to the surface low, became an occluded front that extended from Lake Huron to Pennsylvania on September 13. A 155 mile (250 km) swath of showers and thunderstorms was positioned across the occlusion front, with an area of showers laid along a lacking trough.[1] Also at this time, a third area of showers was centered near the occluded low.

Between 1200 UTC September 13 and 0000 UTC September 14, a shortwave rotated throughout the area of the occluded low. This caused the 500, 700 and 850 millibar levels to move eastward, centering themselves just east of Lake Huron. In these twelve hours alone, the same levels dropped 20 meters, whereas the 200 millibar level had raised 20 meters.[1] During the same period, the surface low moved slowly over Lake Huron and fell five more millibars to 999 mbar. In response to this change, the maximum sustained winds increased as well. After 0000 UTC September 14, the lower and mid-tropospheric portions of the cyclone moved westward, becoming stacked atop one another again, but this time at the 200 mbar level. In contrast to the earlier developments, the baroclinicity of the system diminished rapidly. However, the lower tropospheric area continued to intensify, dropping to 993 millibars, with major height falls.[1] The lowered baroclicity determined that the heat fluxes may have spawned the intensification.

Between 1200 UTC September 14 and 0000 UTC September 15, visible satellite imagery of the vortex revealed a resemblance to a tropical cyclone, with an eye-like feature about 19 miles (30 km) wide.[1] In addition to the eye, convective clouds had also formed, creating the eyewall of a tropical cyclone.[2] Furthermore, feeder bands of convective showers continued extending westward to about 310 miles (500 km). Soon after the cyclone passed buoy 45008, winds turned to the east-northeast and rapidly increased. In contrast to earlier in the storm's life, which had more energy in the high levels, now it was near the surface. Surface analysis indicated that a weaker cyclonic circulation perisisted over the eastern shore of Lake Huron with another center north of Lake Ontario.[1] During this 12-hour period, the cyclone diminished rapidly, mainly in the lower troposphere. Twelve-hour height rises also occurred ranging from 66 – 197 feet (20 – 60 m). The cyclone decayed and left Lake Huron September 15.[1]

Excessive rain of over 4 inches (100 mm) fell over the land surrounding the Great Lakes. This caused flooding in many areas.[1]