Descent to the underworld

Descent to the underworld 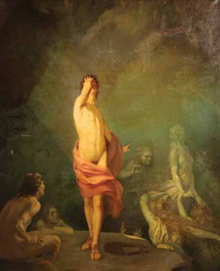 The descent to the underworld is a mytheme of comparative mythology found in a diverse number of religions from around the world, including Christianity. The hero or upper-world deity journeys to the underworld or to the land of the dead and returns, often with a quest-object or a loved one, or with heightened knowledge. The ability to enter the realm of the dead while still alive, and to return, is a proof of the classical hero's exceptional status as more than mortal. A deity who returns from the underworld demonstrates eschatological themes such as the cyclical nature of time and existence, or the defeat of death and the possibility of immortality.[1]

One meaning of katabasis is the epic convention of the hero's trip into the underworld.[2] In Greek mythology, for example, Orpheus enters the underworld in order to bring Eurydice back to the world of the living.

Most katabases take place in a supernatural underworld, such as Hades or Hell — as in Nekyia, the 11th book of the Odyssey, which describes the descent of Odysseus to the underworld. However, katabasis can also refer to a journey through other dystopic areas, like those Odysseus encounters on his 20-year journey back from Troy to Ithaca. Pilar Serrano[2] allows the term katabasis to encompass brief or chronic stays in the underworld, including those of Lazarus and Castor and Pollux.

Mythological characters who make visits to the underworld include: