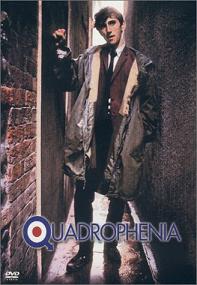 In 2004 the magazine "" named "Quadrophenia" the 35th greatest British film of all time.

The cast of this movie were reunited after 28 years at on 1st and 2nd September 2007 as part of 'The Quadrophenia Reunion' at the 'London Film & Comic Con' run by reelevents.biz. Subsequently the cast have agreed to be part of a Quadrophenia Convention at Brighton in 2008

The film, set in 1964, follows the story of Jimmy Cooper (), a London Mod (one of a group fashion-obsessed working class youths who listen to black American soul music, take amphetamines and ride and Lambretta scooters). The Mods' arch-enemies are the Rockers, who in turn wear black and ride . Disillusioned by his parents and a dead-end job as a runner in an firm, Jimmy finds an outlet for his teenage angst with his Mod pals Dave (), Chalky () and Spider (). However, his angst and confusion are compounded by the fact that one of his Rocker rivals is in fact childhood friend Kevin (), to whom he comments "I don't wanna be like everybody else – that's why I'm a Mod, see?".

A weekend provides the excuse for the rivalry between the two gangs to come to a head, as they both descend upon the seaside town of . A series of running battles ensues, based on the real-life "" riot of 1964. As the police close in on the rioters, Jimmy escapes down an alleyway with Steph (), a girl on whom he has a crush, and they have sex. When the pair emerge, Jimmy is arrested and later fined £50.

Back in London, Jimmy becomes increasingly depressed and unstable as his life begins to fall apart. He is thrown out of his house by his mother, who finds his stash of blues (blue pills). He then quits his job, blows his severance package on blues, and finds out that Steph has become the girlfriend of his mate Dave. After a fight with Dave, Jimmy crashes his scooter, and, high on pills, takes a train to a now tranquil Brighton in an attempt to recapture the elation he felt during the holiday weekend. He revisits the scene of his encounter with Steph, and then discovers that his idol, the suave Mod "poster boy" Ace Face (played by Sting), is in reality a lowly at a Brighton hotel. He steals Ace's scooter and heads out to the cliffs at , where he rides towards the cliff edge. The film ends with the scooter smashing on the rocks below, but Jimmy's fate is not explicitly shown. However, since the film opens with a shot of Jimmy walking back from the cliff edge, he presumably jumped clear at the last second.

An interesting and well known continuity error in the film is that in the final scenes with Jimmy riding Ace's scooter along the cliffs, some scenes show the scooter to have a fly screen and other show it without. The shadow of the filming helicopter can also be seen.

The film was received mostly negatively by critics and was panned for its large amounts of sex, violence, profanity and drug use, which at the time were fairly uncommon in film. It did acquire a large word-of-mouth reputation amongst teenagers too young to go and see it. Today it is considered a and is recognized as a realistic reflection of youth culture in the 1960s. Many have praised Phil Daniels' intense performance.

It was a major influence on the in music and fashion which provided a launching pad for the careers of bands such as , and while boosting the popularity of , previously perceived as a punk act. Sting's appearance in it also benefitted his band despite the fact that their music was not noticeably compatible with traditional Mod tastes.

Several references to appear throughout the film, including an anachronistic inclusion of a repackaged Who album that was not available at the time. The film was almost cancelled when , a member of The Who, died, but in the words of Roddam, the producers, Roy Baird and Bill Curbishley, 'held it together' and the film was made.

Only one scene in the whole film was shot in the studio; all others were on location.
, where Jimmy may or may not have tried to kill himself at the end of the film, was the location of a real-life suicide that influenced the soundtrack and film adaptation (Beachy Head is a well-known suicide spot with locals).

The stunt coordinators underestimated the length that the scooter would fly through the air after being driven off Beachy Head. Franc Roddam, who shot the scene from a helicopter, was almost hit.

An anachronistic appears as the police charge the Mods in Brighton.

An additional anachronism exists during the Brighton riot scenes. Very briefly a cinema marquee can be seen in the background advertising the film , a Warren Beatty film that was released in 1978. One could argue that this 1964 cinema was showing the 1943 film of the same title.

Another anachronism can be seen during the riot scenes. A sign for the appears in the window of a pub, even though the card wasn't launched until 1972.

Also, in certain daytime shots while Jimmy the Mod is riding his scooter along the road a few late 1970's model cars can be seen sprinkled amongst the purposely added mid 1960's cars.

Universal first released the film on DVD in 1999 with an 8-minute montage featurette. It notoriously used the VHS print, which was extremely grainy and washed-out and full of print damage.

Following this in the US was a special edition by Rhino, which included a remastered but matted wide screen transfer, a commentary, several interviews, galleries, and a quiz. However, it was a shorter cut of the film, with several minutes of footage missing, so it still truly wasn't considered the definitive DVD of the film.

On August 7 2006, Universal improved upon their original DVD with a Region 2 two-disc special edition. The film was digitally remastered and included a brand new commentary by Franc Roddam, Phil Daniels and Leslie Ash. Disc 2 features an hour-long documentary and a featurette with Roddam discussing the locations. Like their previous DVD, it was the complete, longer version, and like the US DVD it was a matted wide screen version rather than the original full screen. [http://www.amazon.co.uk/dp/B000GKHM2S]