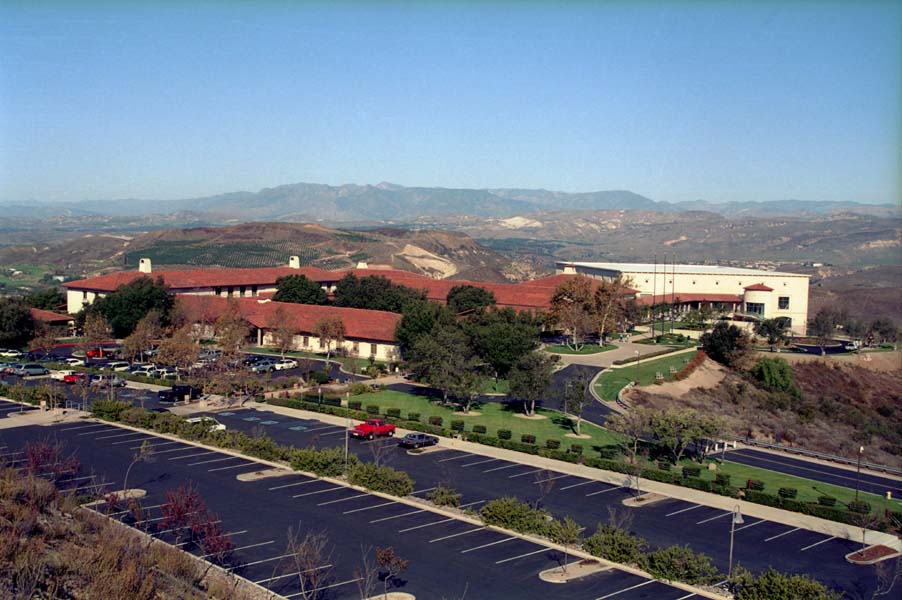 caption =
location = Simi Valley, ,
construction_start_date =November 21, 1988
completion_date =
dedication_date = November 4, 1991
named_for =
number_of_exhibits =
architect =
size =
cost_amount =
manager =
Reagan Library Foundation
website = [http://www.reaganlibrary.com Reagan Library] The Ronald Reagan Presidential Library and Center for Public Affairs is the of Ronald Wilson Reagan, the 40th . Designed by , the library is located in , , about convert|40|mi|km northwest of and convert|15|mi|km west of Chatsworth. The library may be accessed by driving to the Olsen Road exit of State Route 23, which connects to the nearby "Ronald Reagan Freeway", State Route 118.

The street address, 40 Presidential Drive, is numbered in honor of Reagan's place as the 40th President.

Construction of the library began in 1988, and the center was dedicated on November 4, 1991. [cite web |url=http://www.reaganfoundation.org/museum/|title=Museum|accessdate= 2007-11-19|publisher= Ronald Reagan Presidential Foundation] The dedication ceremonies were the first time in United States history that five gathered together in the same place: , , , , and .

When the Reagan Library opened it was the largest of the presidential libraries (with roughly 153,000 square feet). It held that title until the dedication of the William J. Clinton Presidential Library in on November 18, 2004. With the opening of the convert|90000|sqft|m2|sing=on Pavilion in October 2005, the Reagan Library reclaimed the title in terms of physical size; [cite news |url=http://www.venturacountystar.com/news/2007/nov/03/winds-tear-air-force-one-pavilion-roof-at-reagan/|title=Winds tear Air Force One Pavilion roof at Reagan Library|accessdate= 2007-11-20|publisher= "The Ventura County Star"|date=3|month=November|year=2007] however, the Clinton Library remains the largest presidential library in terms of materials (documents, artifacts, photographs, etc.). [cite web |url=http://www.clintonlibrary.gov/museum.html|title=Clinton Library: Library Museum and Information|accessdate= 2007-11-20|publisher= Clinton Presidential Library and Museum] Like all presidential libraries since that of Franklin D. Roosevelt, the Reagan Library was built entirely with private donations, at a cost of US$60 million. Major donors included , , , Joe Albritton, , Richard Sills, and John P. McGovern. For fiscal year 2007, the Reagan Library had 305,331 visitors, making it the second-most visited presidential library, following the ; that was down from its fiscal year 2006 number of 440,301 visitors, when it was the most visited library. [cite video |people= |date2= |month2= November|year2= 2007|title=Presidential Libraries on C-SPAN: Exclusive Series Interviews and Additional Footage|url= rtsp://cspanrm.fplive.net/cspan/PresLib/Clinton/Video/preslib112307.rm|format=rm|medium= Documentary|publisher=C-SPAN|accessdate=2007-11-30 |time=1:32:03, 1:32:55]

First Ladies dedicating the library: , , , , , , , , , and ] As a Presidential library administered by the (NARA), the Reagan Library, under the authority of the Presidential Records Act, is the repository of presidential records for Reagan’s administration. Holdings include 50 million pages of presidential documents, over 1.6 million photographs, a half million feet of motion picture film and tens of thousands of audio and video tapes.

The museum features continually changing temporary exhibits and a permanent exhibit covering President Reagan’s life. This exhibit begins during Reagan's childhood in and follows his life through his film career and military service, marriage to Nancy Davis Reagan, and political career. [cite web |url=http://www.reaganfoundation.org/museum/dtc_home.asp?gid=1&sgid=39|title=Museum > Permanent Galleries > Early Years Gallery|accessdate=2007-11-21|publisher= Ronald Reagan Presidential Foundation] The "Citizen Governor" gallery shows footage of Reagan's 1964 "" speech and contains displays on his eight years as governor. The gallery includes a 1965 Mustang used by Reagan during his first gubernatorial campaign, as well as the desk he used as governor. [cite web |url=http://www.reaganfoundation.org/museum/dtc_home.asp?gid=1&sgid=40|title=Museum > Permanent Galleries > “Citizen Governor” Gallery|accessdate=2007-11-21|publisher= Ronald Reagan Presidential Foundation] His 1980 and 1984 presidential campaigns are also highlighted, as well as his inauguration suit and a table from the is on display. News footage of the 1981 assassination attempt on his life is shown, and information about the proposed (SDI — dubbed "Star Wars") is included. [cite web |url=http://www.reaganfoundation.org/museum/dtc_home.asp?gid=1&sgid=41|title=Museum > Permanent Galleries > New Beginnings Gallery|accessdate=2007-11-21|publisher= Ronald Reagan Presidential Foundation]

The hilltop grounds provide expansive views of the area, a re-creation of a portion of the Lawn, and, like many presidential libraries, a piece of the . An (BuNo 162592) is also located on the grounds.

On November 8, 2007, Reagan Library National Archives officials reported that due to poor record-keeping, they are unable to say whether roughly 80,000 artifacts have been stolen or are lost inside the massive museum complex.

A convert|90000|sqft|m2|sing=on exhibit "hangar" serves as the setting for the permanent display of the aircraft utilized as "" during Reagan's administration. [cite web |url=http://www.reaganfoundation.org/airforceone/|title=Air Force One Pavilion|accessdate=2007-11-23|publisher=Ronald Reagan Presidential Foundation] The aircraft, , was also used by six other presidents in its active service life from 1973&ndash;2001, including during his second term, , , , , and .

On June 9, 2008 Secretary of Education joined Nancy Reagan to dedicate the Reagan Library Discovery Center, located in the Air Force One Pavilion.

Reagan Library has hosted many events, including the funeral of Ronald Reagan in June 2004, and the first Republican presidential candidates' debate of the 2008 primaries. On May 23, 2007, and n Foreign Minister held a brief private talk and a press conference. [cite news |first=Jill|last=Serjeant|title=Rice, Australian minister evoke Reagan in Iraq talk|url=http://www.reuters.com/article/politicsNews/idUSN2344413120070523|publisher=Reuters|date=2007-05-23|accessdate=2007-11-23] On July 17, 2007, Polish President presented Poland's highest distinction, the , to Mrs. Reagan. [cite web |url=http://poland.usembassy.gov/events_2007/president-kaczynski-presents-order-of-the-white-eagle-to-late-president-ronald-reagan--18-july-2007.html|title=President Kaczynski Presents Order of the White Eagle to Late President Ronald Reagan|accessdate=2007-11-23|date=2007-07-18|publisher=U.S. Department of State]

Following the president's death, Reagan's casket was driven by hearse to the Reagan Library on June 7, 2004. There, a memorial service was held in the library lobby with Mrs. Reagan, the president's children and close relatives, as well as friends present. The Reverend Dr. Michael Wenning officiated the service.

From June 7th to 9th, Reagan's casket lay in repose in the library lobby, where about 105,000 people paid their respects by walking past the casket. [ [http://transcripts.cnn.com/TRANSCRIPTS/0406/10/ltm.04.html CNN.com - Transcripts ] ] After flying the body to , in the , and a national funeral service in the , Reagan's casket was brought back to the library in California for a last memorial service and interment.

A tomb had been previously built for the eventual use of Reagan and his wife. Following a sunset service on the library grounds the previous evening, early on the morning of June 12, 2004 President Reagan was laid to rest in the underground vault. [ [http://www.suhor.com/burial_of_a_president.htm Ronald Reagan's Burial | A-Behind-the-Scenes Diary | Suhor Industries ] ]

On May 3, 2007, the Ronald Reagan Presidential Foundation and hosted the first 2008 Republican primary debate in the Library's Air Force One Pavilion. The candidates present included Kansas Senator , former Virginia Governor , former New York City Mayor , former Arkansas Governor , Representative of California, Senator of Arizona, Representative of Texas, former Massachusetts Governor , Representative of Colorado, and , former and President George W. Bush’s first . Mrs. Reagan, California Governor , and , Chairman of the Ronald Reagan Presidential Foundation were among those in attendance. Candidates discussed the , the , , , , , , , and made at least 20 individual references directly or in passing, to Ronald Reagan and his presidency. [cite web|date=May 4, 2007|author=Nagourney, Adam and Marc Santora.|url= http://www.nytimes.com/2007/05/04/us/politics/04repubs.html?hp|title= ’08|Republicans Differ on Defining Party’s Future|publisher=""|accessdate=2007-05-04]

On January 30, 2008, after the Republican candidates were narrowed to four — , , , and — the Library was the scene of the final GOP debate, once again hosted by the Reagan Foundation and Mrs. Reagan. [cite news|title=Romney Blasts McCain over Iraq War Charge|url=http://youdecide08.foxnews.com/2008/01/30/romney-mccain-out-of-step-with-conservative-mainstream/|work=Associated Press|publisher=Fox News|accessdate=2008-01-31|date=January 30, 2008]