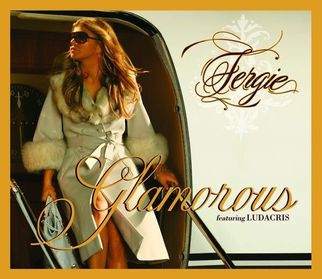 "Glamorous" is the third single taken from pop/R&B singer Fergie's solo debut album, "". In March 2007, the song became Fergie's second number-one single in the . The single was released on , in the UK [ [http://www.hmv.co.uk/hmvweb/displayProductDetails.do?ctx=282;2;-1;-1&sku=611597 http://www.hmv.co.uk/hmvweb/displayProductDetails.do?ctx=282;2;-1;-1&sku=611597] "HMV.co.uk" ] and was the second single taken from the album. The single was not as successful in Latin America (where it wasn't officially released) as London Bridge and . "Glamorous" is the fourth single from the album in , where "Big Girls Don't Cry" was released as the third single. Fergie sang this song along with "Big Girls Don't Cry" at the . As of March 2008, the single has sold 2,300,000 copies. The song was used in the promotional video for the CW television show "Gossip Girl". The song appears on the video game .

The video had a World Premiere on 's on , and it debuted on in the show at number 10. It made its peak at number 3 on its third day, making it her highest charting video on TRL (previously held by at #4). It stayed on the show for 13 days. The video is directed by , and was shot in an aspect ratio. It starts in 1994 with Fergie and at a keg party in East Los Angeles before she was famous. The camera then rotates upward where it is present day and Fergie is lounging in a business jet, and as the chorus suggests, "flying first class, up in the sky". The is played by . She is seen watching the music video on her LG enV for the "". Fergie then lands and enters a limo waiting for her where she goes with her friends to a drive thru at a fast food restaurant. This restaurant is most likely as the lyrics suggest, though the food package appears to bear logos. The video at this point does a transition to the past (1990's) where it is suggested Fergie came to this same restaurant with her friends before her glamorous life. The transition occurs as Fergie sings of the days when she had a Mustang. The limo transforms into a Mustang . She and her friends are wearing clothes and have hairstyles similar to those of 1990s pop culture.

The video then goes back to present day where Fergie and are shown shooting a movie called "Glamorous", a throwback to "Bonnie and Clyde". The two are shown holding s while being held up by police near a canyon, apparently for stealing money. Ludacris raps his verse to Fergie telling her all the expensive things he will buy for her. Fergie and Ludacris are then shown shooting down the cops, after which the movie shoot ends.

After the shoot Fergie proceeds to sit in a chair with her name on it, as people rush over to do her make up. While this is happening she thanks her fans for making her famous. Scenes of this are intercut with Fergie getting back on the plane she came on, while she flashes back to when she was a little girl, where her father warned her about the coldness of the showbiz industry. Fergie is then shown at the same kegger from earlier in the video, with , , apl.de.ap and with with whom she clinks plastic glasses, followed with the plane she is on in the present day flying into London as the sun sets.

"Glamorous" ended as the year's 10th highest seller there, ranked at #10 on the Billboard Year-End chart for 2007. [ [http://www.billboard.com/bbcom/yearend/2007/charts/hot100.html Billboard 2007 Year In Music ] ] "Glamorous" debuted at #10 on the Australian singles chart, and was the week's second highest debut behind Christina Aguilera's "" which debuted at #6. "Glamorous" made its initial peak at #3 before rising to its peak at #2. "Glamorous" has been certified Platinum by ARIA for sales of over 70,000. "Glamorous" was also ranked at #13 on the Australian ARIA Year-End singles chart for 2007, and is one of four entries on this chart for Fergie, with the others being "", "Clumsy" and "Big Girls Don't Cry". [ [http://www.aria.com.au/pages/aria-charts-end-of-year-charts-top-100-singles-2007.htm ARIA Charts - End of Year Charts - Top 100 Singles 2006 ] ] [ [http://www.ariacharts.com.au/pages/charts_display.asp?chart=1U50 http://www.ariacharts.com.au/pages/charts_display.asp?chart=1U50] "Ariacharts.com" ] The song debuted at #56 in the and peaked at #6, making it her second solo Top 10 hit.In , the song thus far has dubious honor of being the only single to not chart in the ; "Big Girls Don't Cry" has already charted. [ [http://toplatino.net Top Latino] ] This song was also used during the evening gown competition of the Miss USA 2007 pageant.