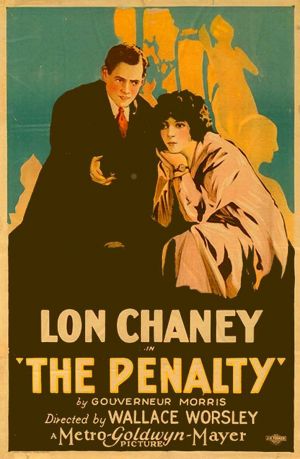 "The Penalty" is an American , originally released in 1920. It was directed by , and written by and , based upon the by Gouverneur Morris. It starred Lon Chaney, , , Jim Mason, and .

The film follows gangster Blizzard (Lon Chaney), whose legs were mistakenly amputated at a young age. Driven insane by the social pressures of being forced to walk in a crutch, Blizzard becomes a crime lord. He tracks down the doctor who performed his operation, and plots a twisted revenge &mdash; kidnap the doctor's daughter's fiance (Clary), and graft his legs onto Blizzard's stumps.

The apparatus worn by Chaney to simulate amputated legs was complex and incredibly painful. Consisting primarily of two wooden buckets and multiple leather straps, Chaney's knees sat in the buckets, while his lower legs were tied back. Though studio doctors asked that Chaney not wear the device, he insisted on doing so, so his costume would be authentic.

"The Penalty" was one of Chaney's breakout roles, showcasing his taste for the macabre and talent for contortion and disguise. He had previously demonstrated similar qualities in the previous year's "The Miracle Man", but "Penalty" secured Chaney's place as one of America's most famous s, before moving on to his more famous roles in 1923's "The Hunchback of Notre Dame" and 1925's "The Phantom of the Opera".