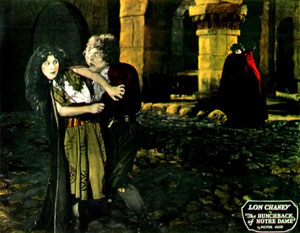 caption = A promotional lobby card for "The Hunchback of Notre Dame".
director =
producer =

The 1923 film version of "The Hunchback of Notre Dame", starring Lon Chaney as and as Esmeralda, and directed by , is one of the more famous adaptations of 's novel "". The film was Universal's "Super Jewel" of 1923 and was their most successful , grossing over three-million dollars.

The film is most notable for the grand sets that recall 15th century Paris as well as Lon Chaney's performance and spectacular make-up as the tortured bell-ringer of Notre Dame. The film elevated Chaney, already a well-known character actor, to full star status in Hollywood. It also helped set a standard for many later horror films, including Chaney's "The Phantom of the Opera" in 1925. Today, the film is in the .

The story is set in Paris ten years before Columbus discovered America.

Quasimodo is a deformed bell-ringer of the famous Cathedral of Notre Dame in Paris. Jehan, the Archdeacon's evil brother, prevails upon him to kidnap the fair Esmeralda Clopin, the ward of the King of the underworld. Dashing Phoebus rescues her and takes her under his wing. Quasimodo is sentenced to be lashed in the public square. As he suffers under the sting of the whip, Esmeralda comes and brings him water. From that time he is her devoted slave. Jehan and Clopin learn that Captain Phoebus plans to wed Esmeralda, and do all in their power to break up the affair, but fail. Jehan then stabs and wounds Phoebus and lays the blame on Esmeralda. She is sentenced to die, but is rescued by Quasimodo and takes refuge in the Cathedral. Clopin tries to storm the Cathedral, while crafty Jehan attempts to loot the treasure vaults. Quasimodo routs the invaders with torrents of molten lead, but gives his life to save Esmeralda from Jehan. Phoebus comes to the rescue and saves the Church and his sweetheart. As they clasp each other to their hearts, Quasimodo rings his own death toll. After ringing the bell, Quasimodo dies from a stab wound Jehan had given him.

Original prints of the film were on film stock and were either worn out, decomposed or were destroyed by the studio (mostly the latter). Original prints were on tinted film stock in various colors, including sunshine, amber, rose, lavender and blue.

The only surviving prints of the film are 16 mm "show-at-home" prints distributed by Universal in the 1920s and 1930s for home-movie purposes, and no original 35mm negatives or prints survive. Most video editions (including public domain releases) of the film are derived from 16 mm duplicate prints that were distributed by Blackhawk Films in the 1960s and 1970s. A DVD release of a newly restored print of the film was released by Image Entertainment on October 9, 2007.

The new Image 'Ultimate Edition' DVD of "The Hunchback" was produced by David Shepard and was remastered in high-definition from an original color-tinted 16mm print and features a new orchestral musical score by Donald Hunsberger and composed by Robert Israel with an audio commentary by Chaney historian Michael F.Blake and rare bonus features such as rare behind the scenes footage on the making of the film and much more.