Some Kind of Wonderful (film)

Some Kind of Wonderful (film) 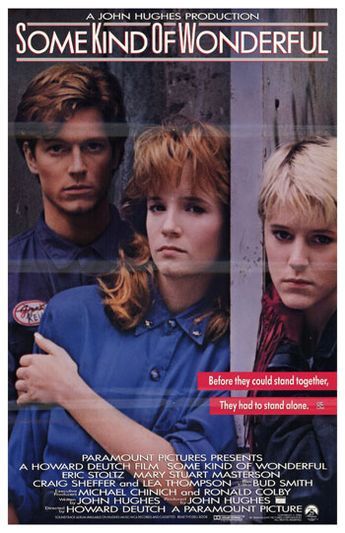 "Some Kind of Wonderful" is a 1987 starring , , and . It was one of the many successful teen dramas written by John Hughes in the 1980s, although this one was directed by . The film's title comes from a song by John Ellison (Soul Brothers Six) that was a hit for ; the song itself is not featured in the movie.

The tomboyish Watts (Masterson) has always considered working-class Keith Nelson (Stoltz) her best friend, but when he begins dating the popular Amanda Jones (Thompson), she realizes that she feels something much deeper for him. Hardy Jenns, Amanda's jealous former boyfriend (played by ), further complicates matters.

Connection to Pretty in Pink

"Some Kind of Wonderful" is noted for having the same basic premise as Hughes and Deutch's previous film, "": A quiet blue-collar high-schooler with aspirations of upward mobility (Stoltz in "Wonderful" and in "Pretty in Pink") becomes infatuated with a "popular" classmate (Thompson and ), while remaining oblivious to the attraction to them felt by their close friend of the opposite sex (Masterson and ) and avoiding the attention of a spiteful and petty "rich kid" with a connection to the love interest (Sheffer and ). Hughes originally wrote "Pretty in Pink" ending with Ringwald and Cryer's characters falling in love, but was pressured into changing the story so that Ringwald would end up with McCarthy. Supposedly, Hughes wrote "Some Kind of Wonderful" in response, with the ending he preferred.

* was offered the role of Amanda Jones but refused it, ending her successful relationship with John Hughes. At the recommendation of Eric Stoltz, Hughes then hired Lea Thompson. Thompson met director Deutch on set, and they later married.

*The role of Keith Nelson was written with Eric Stoltz in mind.

*The car that Watts drives in the movie is a very dilapidated Austin Mini modified for driving in the US. Although they are very popular now, they were quite unfamiliar to most of the American public in 1987.

* The movie was partially filmed in San Pedro, California with the high school scenes filmed at San Pedro High.

*, like , was discovered by John Hughes in New York and also suggested she'd be cast in this film.

*, who played the role of 'Cindy Nelson' would become well known to American television audiences in the role of '' on the sit-com "".