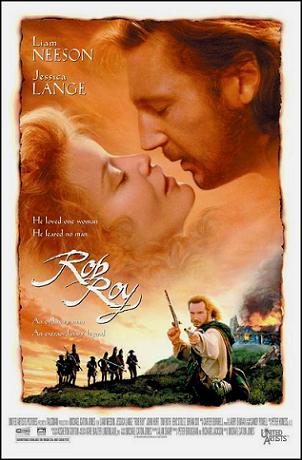 "Rob Roy" is a historical drama film directed by and released on , . The film was generally inspired by elements of the life of a 17th-18th century Scot named and his battles with feudal landowners in the . United Artists, distributor of the film, describe "Rob Roy" as a "riveting adventure of courage, love and uncompromising honour."

The film stars in the title role, along with , , , and . Tim Roth was nominated for the for his portrayal of the Archibald Cunningham.

It was released within a year of the better known , which also chronicled the life of a semi-mythic Scottish hero battling English land policy in pre-Industrial Scotland.

Times are hard in the early 1700’s in the . The traditional is breaking down; formerly powerful warrior clans like the MacGregors now languish in the grip of starvation, oppressed and overshadowed by aristocrats from the .

Chieftain () wishes to better the lives of his clansmen, so he asks the Marquess of Montrose () to back a venture to buy at and sell them at a profit at in by lending him 1000 s. Rob temporarily entrusts the money to his sub-chieftain Alan MacDonald (), but Montrose’s ic factor Killearn () and protégé Archibald Cunningham () secretly murder Alan and divide the money between them.

Refusing to believe that Alan has absconded to America with the money, MacGregor is, nevertheless, now heavily in debt to Lord Montrose. The two men meet to renegotiate terms and replace the stolen money. Montrose agrees to write off the loss, but with one condition: MacGregor must falsely testify against Montrose’s rival the Duke of Argyll (), saying he is a Jacobite. Rob flatly refuses — not because he knows or cares about the Duke's politics, but because he considers dishonourable.

Lord Montrose then orders Cunningham to have Rob placed in . But MacGregor opposes this order and menaces Cunningham with a (his dagger), declaring that his father spent two years in the same prison for no reason other than a nobleman's grudge. He then escapes into the highlands. Seething with rage and hatred, the Marquess vows that Rob and his family have slept their last peaceful night. He sends Cunningham with a small company of to hunt Rob down as an outlaw.

The middle of the story deals with Rob’s evasion of Cunningham and his soldiers. MacGregor's farm is burned and all of his livestock are slaughtered. His wife Mary (), who had refused to go into hiding with Rob, is brutally raped by Cunningham while Killearn looks on. Meanwhile Rob's hothead younger brother Alasdair () arrives just as Montrose's soldiers are leaving; he finds only carnage behind them. He also finds Mary obsessively washing in the and quickly realizes what has happened to her.

Mary swears Alasdair to secrecy concerning her rape. She knows that Cunningham did it as a calculated means of drawing her husband out of hiding; the loss of his farm and livestock he might tolerate, but a blood insult to a family member would surely make Rob abandon all caution in the pursuit of vengeance. Reluctantly Alasdair promises to keep his silence.

This entire time, a girl from the MacGregor clan named Betty Sturrock () has been employed as a at the Montrose estate. She is deeply in love with Cunningham, who has seduced and impregnated her. When Killearn informs Montrose of the scandal, Betty is dismissed in disgrace; fortunately, she seeks refuge with Rob and Mary at their new home. There, Betty reveals that she has inside information about Killearn and Cunningham's theft of the money that may stand up in court and clear Rob's name. However, she is also in a distraught emotional state about being used and discarded by Cunningham.

Rob manages to capture Killearn, with the intention of forcing a full confession of his part in the conspiracy, theft, and murder; and using Betty as a witness. He sends Alasdair to bring her to their hiding place, but Alasdair returns with Mary and some unwelcome news: Betty has hanged herself before testifying to anything in court.

Mary insists upon being allowed to interrogate the factor herself, insisting she has a better chance of appealing to what little honour he has. But the thoroughly amoral Killearn threatens to counter-blackmail her by telling Rob not only of her rape — but of the possibility she, like Betty, is carrying Cunningham's child. Mary flies into a rage and stabs Killearn. Equally enraged, Alasdair finishes the job by drowning him.

Now Rob has the truth but no material witnesses, and little choice but to go back into hiding. During one of Cunningham's attacks, hothead Alasdair reveals that Rob's men were hiding on the hillside by shooting one of the soldiers. They pursue and mortally wound Alasdair, but before dying he breaks his silence and finally tells Rob about Mary's rape by Cunningham. While he is detained tending to Alasdair, Rob is at last, overtaken, captured, and dragged back to Lord Montrose.

Face to face with his creditor, Rob openly denounces Cunningham, accusing him of conspiring with Killearn to commit robbery and murder. Lord Montrose is a shrewd man and has already begun to suspect the truth on his own. However, by this time MacGregor has humiliated him so many times that he no longer cares about the money, and decrees that Rob will be from a nearby bridge. At the last moment Rob manages to seize the hangman's rope. He wraps it around Cunningham's throat and half-strangles him by leaping off the bridge. In order to save Cunningham's life Montrose orders the rope cut. Rob falls to the water, is washed over the rapids, and makes it to safety.

During this time, Mary has fled to and revealed Montrose’s plot against the Duke of Argyll, who is their Chief. She explains that her husband has been outlawed for refusing to slander him. She also states that Rob is far too proud to claim aid from the Campbells for simply refusing to perjure himself. Mary begs the Duke to champion her husband's cause before Montrose and Cunningham succeed in killing him.

After Rob finds out that Mary has taken refuge with Argyll, he makes his way to her croft. They reconcile the issue of her being raped, and possibly impregnated, by Cunningham. She apologizes for her unwillingness to try terminating the pregnancy, because the child might be Rob's: "I could not kill it, husband." Rob responds, "It’s not the child that needs killing."

Under a "gentleman's agreement" between the Marquess and the Duke, a duel is arranged between Rob and Cunningham. When Montrose suggests that they wager on the outcome, the Duke offers the following terms; if Rob wins, the debt is to be forgiven; if he dies, Argyll will pay his bill. Montrose quietly repeats what he said after Cunningham's first duel in the film, when he bested Argyll's champion Guthrie: "My factor will call on Your Grace's factor."

In the finale, Rob looks to be losing the duel. His body has been sorely abused throughout the movie; he enters the duel in poor physical condition to start with, making him slow and slightly clumsy with his . Cunningham, wielding a , is fresh, fast, and light on his feet. He sadistically toys with Rob, taking him apart cut by cut, obviously relishing every second. Finally, unable to lift his sword, an exhausted Rob is at his opponent's mercy. Cunningham looks toward Montrose, who nods his assent.

But as Cunningham prepares to deliver a lethal thrust, Rob seizes the rapier point with his bare left hand, as blood flows between his fingers. Cunningham desperately tries to extricate his blade, realizing in horror that he has again underestimated Rob (as he had earlier in the film, when a bound, beaten and exhausted Rob Roy almost succeeded in tearing out Cunningham's throat with his teeth). His enemy now unable to parry, Rob seizes his own sword with his right hand and deals a great slashing blow to Cunningham's chest, laying open his torso from shoulder to breastbone. As Montrose stares at Cunningham's corpse in disbelief, the Duke rises and follows Rob out of the room. He coldly tells Montrose, "I shall hold you to our bargain."

With all his debts and past offenses settled, the Marquess shamed, and his honour avenged, Rob returns home to Mary and his sons.

The movie was shot entirely on location in , much of it in parts of the Highlands so remote they had to be reached by helicopter. , , and can be seen. In the opening scenes, Rob and his men pass by Loch Leven. stood in for , on the banks of which the real Rob Roy lived. Scenes of the Duke of Argyll's estate were shot at , the Marquis of Montrose's at . Shots of "The Factor's Inn" were filmed outside . was used in a landscape shot.

Non-stop Highland rain presented a problem for cast and crew when filming outdoor shots. So did the resulting swarms of midges, a maddening local insect with an irritating bite.

The swordfights were choreographed by , with consulting. The small, quick had replaced the heavier broadsword everywhere south of the Tweed over a century before, but the stylistic contrast mirrored that between the Englishman and the Scot, Cunningham and MacGregor. Film critic remarked that the climactic swordfight sequence "is the best of its sort ever done."

The part of the Duke of Argyll was first offered to . In real life, at the time of this story, , was in his early thirties, much younger than either Keir or Connery. When Queen Anne died shortly after, Argyll fought against the Jacobite rebellion of 1715.

was also in his early thirties, much younger than John Hurt. He was already a duke by this time, no longer a marquess as portrayed in the film.

Indeed, in real life, Rob Roy was older than both of the main aristocrats in the story, not the much younger man portrayed.

The singer was portrayed by , best known as the lead singer of the Scottish folk group Capercaillie, and she sings "" - a traditional song which the band have covered.