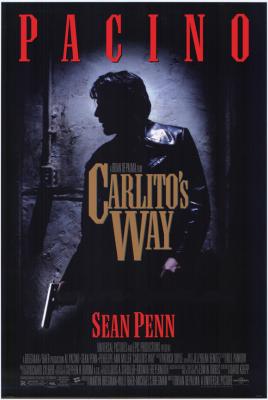 The film is based on "After Hours", but used the title of the first novel to avoid it being confused with 's 1985 film of the same name, and focuses on Carlito's activities once he is released from prison. , a fictional Puerto Rican criminal vows to go straight and to live life as a law-abiding citizen. However, his past will not let him, and he unwittingly ends up being dragged into the same criminal activities that got him imprisoned in the first place.

The film received a mixed response from critics, with a similar lukewarm result at the box office, but has subsequently been better received by both critics and film fans. Both and received nominations for their performances. A called "", based on the first novel, was filmed and released in 2005.

The story takes place in 1975 as Carlito Brigante () is released from prison with the help of his close friend, and lawyer, Dave Kleinfeld (). Carlito makes a surprising announcement to Kleinfeld: he intends to go straight. Carlito visits his old neighborhood and is disturbed by how much has changed during his years in jail and how few people he knows. He runs into Pachanga (), a friend and fellow gangster, who runs down a list of their friends who have either died or been sent to prison. Carlito, reluctantly, accompanies his young cousin, Guajiro (John Augstin Ortiz), on his way to a big deal. However, the gang have already killed Guajiro's boss, and betrays and kills him as well. Carlito ends up having to shoot his way out and once the dust settles he flees from the scene, taking the money from the deal. He buys into a owned by a named Saso () and acting as a , begins to save every penny possible. He brings in his friend Pachanga as his right hand man and encounters Benny Blanco (), a young gangster from the .

Away from the club, Carlito looks up Gail (), a former girlfriend, and they meet up with some awkwardness. Lalin (), a former friend, arrives in the club wearing a "wire" in an attempt to get evidence against Carlito. This is dealt with quickly, and Carlito follows up on a comment made by Lalin about Gail in a stage show. Gail is discovered dancing, not in a play but rather on stage, in a . Their relationship eases somewhat after that, as Carlito proves tolerant of it and some of the anxiety Gail had is lifted.

Kleinfeld, now doing and drinking extensively, meets with a mob boss client, Tony "Tony T" Taglialucci (Frank Minucci). He believes that Kleinfeld stole a million dollars from him that was supposed to be used for a payoff. He gives Kleinfeld an ultimatum; help him break out of prison, or have a mob hit put on him. Meanwhile, Blanco grows frustrated with Carlito's rejection of champagne, and events escalate when Kleinfeld sparks a love-interest with Blanco's girlfriend, Steffie (Ingrid Rogers). After Carlito tells Benny what he thinks of him, Benny manhandles Steffie, spurring Kleinfeld to pull out a gun in Benny's face and threaten to kill him on the spot, causing chaos. Carlito is forced to take action and, with the help of Pachanga, takes Benny out the back where Pachanga and one of the guys from the club () beat him up. Carlito threatens to kill Benny if he is seen in the club again, and then orders Pachanga to let him go, as Carlito has rejected the violence of his youth.

Kleinfeld begs Carlito for his help with the escape attempt for Tony T. However, in the escape attempt, the increasingly erratic Kleinfeld kills both Tony T. and his son. Carlito realizes the severity of the transgression and decides that the only thing to do is to grab the money and leave town with Gail. Carlito is taken into Norwalk's office where he hears a tape of Kleinfeld offering to testify against Carlito. They know that Kleinfeld and Carlito were involved in the incident with Tony T., and in fact there was already an attack on Kleinfeld, which has put the lawyer in the hospital. The prosecutor offers Carlito a deal; testify against Kleinfeld and he can walk. Carlito refuses and goes to the hospital to learn the truth from Kleinfeld. On the way in he notices a suspicious man dressed as a . Kleinfeld admits to selling out Carlito and while pretending to help Kleinfeld with his gun, Carlito deftly unloads it and leaves. The police officer turns out to be Tony T.'s other son, Vincent "Vinnie" Taglialucci (), who has come to finish off Kleinfeld. With his gun unloaded, Kleinfeld has no chance, and is fatally shot in the head.

Carlito returns to the club intent on getting the money and getting out. Once there, however, he is greeted by a group of Italian gangsters led by Pete Amadesso (Richard Foronjy), and Vinnie Taglialucci, who spotted Carlito earlier in the hospital. The Italians know that he is involved, but before they have a chance to do anything, Carlito manages to slip out through a back way. A wild chase ensues where the Italians pursue him throughout the city subway system and into , where the Carlito and Gail will be taking is waiting. Carlito nearly manages to give them the slip, but is spotted and drawn into a wild where he manages to kill off all of his pursuers, except Vinnie, who is then shot by police. However, as he meets up with Pachanga and Gail, Carlito is ed by someone he did not expect: Benny Blanco, who shoots him in the abdomen with a silenced gun. Pachanga admits to be working with Blanco to set Carlito up, to lookout for his own future, just before he himself is shot by Blanco, who then runs off.

A dying Carlito hands Gail the money and tells her to escape with their unborn child, and live a new life elsewhere. The film ends with Carlito being wheeled away on a as he stares at a with a beach and a dancing woman frozen in shot. He thinks about his wishes for Gail to get out and his own death. The billboard then comes to life and the woman, who is Gail, starts dancing as he slowly closes his eyes.

Pacino first heard about Carlito Brigante in a gym in back in 1973. Pacino was working out for his movie "" when he met Supreme Court Judge (the author who was writing the novels "Carlito's Way" and "After Hours"). When the novels were completed Al read them and liked them, especially the character of Carlito.

Pacino went to producer Martin Bregman with a view of getting a Carlito film made.

Koepp wrestled with the throughout the writing process. Initially the voice-over was to take place in the hospital, but De Palma suggested the train station platform.

had viewed a cut of the pool hall sequence, a note was passed onto the crew stating that they felt the scene was too long. De Palma spent more time adding to the sequence and with the help of editor Bill Pankow made it work. The producers came back saying "much better shorter."

Apart from that poster sequence (shot in Florida), the entire movie was filmed on location in New York. De Palma roamed , searching for suitable visual locations. A tenement on 115th Street became the site of Carlito's homecoming; the barrio scene. The courtroom, in which Carlito thanks the prosecutor, was shot in Judge Torres's workplace, the State Supreme Court Building at 60 Centre Street.

Tony Taglialucci's escape from , a night shoot mid-river was considered impossible. Instead, the production used a shipyard where Kleinfeld's boat was lowered into an empty "lock" into which river water was pumped. Smoke machines and towers of space lights were installed. To achieve the rough and choppy nature of the East River a WOW Wave Ball (a sophisticated device, which churns up controlled waves) was used.

For a climactic finale, De Palma staged a chase from the platform of the 125th Street IRT Station to the escalators of . For the shoot, trains were re-routed and timed so that Pacino and his pursuers could dart from car to hurtling car.

* as . Pacino came to "Carlito's Way" directly from his Oscar-winning role in "".

* as Club Bouncer-Friend of Pachanga helps beat up Benny Blanco

On the show, Ebert gave the film a rating of B+ while Siskel gave it a C+.

Bregman was surprised about some of the negative reviews, but stated that some of the same reviewers have since "retracted" their views upon further discussions of the film. A few weeks before the film's premiere, De Palma told the crew not to get their hopes up about the film's reception. He correctly predicted that Pacino, having just won an Oscar, would be criticized; Koepp, having just done "", would "suck"; Penn would be "brilliant" because he had not done anything for a while; and he himself, having not been forgiven for "The Bonfire of the Vanities", would not quite be embraced.

"Carlito's Way" premiered with an opening weekend taking of over $9 million. At the end of its theatrical run, the film had grossed over $36 million domestically and $63 million worldwide.

composed the original score, while Musical supervisor supplemented the soundtrack with elements of salsa, merengue and other authentic styles.

The film has been released on standard and widescreen versions. It was later released on in 2004,

' first novel "Carlito's Way" was filmed and released in 2005, under the title "Carlito's Way: Rise to Power". Although critically panned, Torres did give the film his blessing and considers it to be quite an accurate adaptation of the first half of his novel, with a planned sequel for the second half in the works.