The Bonfire of the Vanities (film)

The Bonfire of the Vanities (film)

Infobox Film
name = The Bonfire of the Vanities 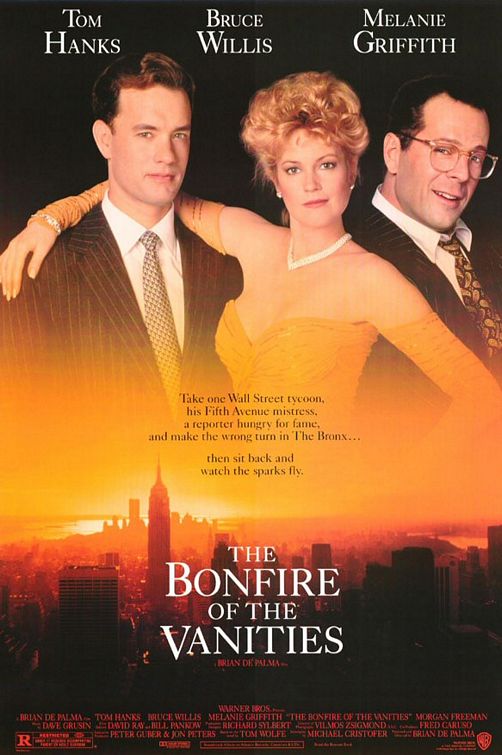 "The Bonfire of the Vanities" is a 1990 film adaptation of a novel by , also called "". The film was directed by and stars as Sherman McCoy, as Peter Fallow, as Maria Ruskin, and as Judy McCoy, Sherman's wife. The screenplay was written by , and the original music score was composed by . The film was marketed with the tagline "An outrageous story of greed, lust and vanity in America."

Sherman McCoy is a Wall Street investor who makes millions while enjoying the good life and the sexual favors of Maria Ruskin, a Southern belle gold digger. Sherman and Maria are driving back to Maria's apartment from JFK airport when they take a wrong turn on the expressway and the two find themselves in the "war-zone" of the South Bronx. When they are threatened by two black youths, Maria guns the engine, running over one of the teenagers and putting him in a coma. The two drive away and decide not to report the accident to the police.

Meanwhile, indigent alcoholic journalist Peter Fallow, anxious for a story to make good with his editor, comes upon the hit-and-run case as a rallying point for the black community, while Abe Weiss recognizes the press coverage inherent in prosecuting the callow Sherman. As Sherman is brought to his knees, the New York community fragments into different factions who use the case to suit their own cynical purposes. Finally, Sherman is left without any allies to support him except for the sympathetic Judge Leonard White and the remorseful Fallow.

Cristofer's original script ended cynically with the supposed victim of the hit-and-run walking out of the hospital, suggesting that the whole scenario was concocted. That ending did not test well with audiences and was dropped.

The Fallow character, who was English in the book but American in the film, narrates in voice-over.

The film was plagued by controversy: the role of Peter Fallow was offered to both and (Fallow was English in the novel) by Brian De Palma, but both turned down the role. When De Palma was unable to deliver an actor, the studio forced the director to cast Bruce Willis (who had starred in the successful 1988 film "") as Fallow instead. was initially offered the role of the judge, but demanded a fee of US$1 million. The producers balked at meeting his price and signed instead for a modest $150,000. Arkin was replaced by when the studio decided to change the judge's ethnicity from Jewish to African-American in order to moderate criticism of the film's racial politics, and dialogue was added to have the judge give the final denouncement towards the manipulative actions of the main characters. Lastly, , who has a significant part in the film, chose to not be credited over a contract dispute. [ [http://www.imdb.com/title/tt0099165/trivia The Bonfire of the Vanities (1990) - Trivia ] ]

Also, the studio took liberties with the source material, making Sherman McCoy more sympathetic and adding a subplot involving a minor character, Judge Leonard White. The controversies surrounding the film would be detailed in a book called "", written by Julie Salamon. For instance, the book shows that Brian de Palma had a difficult relationship with then-rising-star Bruce Willis who, in the words of Julie Salamon, "was largely disliked by most of the cast and crew [due to his ego] ." In one notorious instance, during the filming of one scene in which Willis was with Alan King (the scene in which the character played by King dies), Willis challenged the crew to make the whole scene move along faster, allegedly because it was very hot on the set. Even though Willis was called out of the set by de Palma to discuss this incident, this particular scene ended up being considerably shorter and simpler than originally intended.

In one notable visual scene Maria Ruskin () arrives in New York on an Concorde. The film's Second Unit Director, Eric Schwab, calculated the time and day when a runway at JFK would line up exactly with the setting sun, to serve as a backdrop, and managed to film in the single 30-second time period when this occurs in any given year, while winning a bet that he could make the scene an essential part of the movie. [ [http://findarticles.com/p/articles/mi_qn4158/is_20070202/ai_n17205796 'THE BONFIRE OF THE VANITIES' (1990) | Independent, The (London) | Find Articles at BNET.com ] ] The 5-camera shot cost $80,000 [cite book |title=The Devil's Candy |last=Salamon |first=Julie |authorlink= |coauthors= |year=1991 |publisher=Dell |location=New York |isbn=0 385 30824 8 |pages=243 ] and lasted just 10 seconds in the final cut. Schwab also directed the opening title shot &mdash; an almost equally elaborate and expensive set-up requiring a 24-hour timelapse of Manhattan, from a camera platform beside a on top of the .

Several of the sets parodied the home decorated by and for Carolyne Roehm and . ["Vincent Fourcade - CELEBRATING THE PLEASURES OF MAGNIFICENT EXCESS", by Mitchell Owens, "," January 2000, v. 57 #1, p. 169 &ndash; one of twenty five persons named by the magazine "Interior Design Legends".]

The cover of Peter Fallow's book in the film is a reproduction of the original first edition of Tom Wolfe's novel from 1987.

Sherman and Judy McCoy's luxury apartment was built on the Warner Bros. stage in Burbank, designed by .

The exteriors that were supposed to be Park Avenue really were Park Avenue, late at night. The rain and the phone box were fake. The lobby scenes were shot at 77 Park Avenue -- De Palma said he hated that lobby, but it was all co-producer Fred Caruso could come up with. "Don't worry," said Caruso. " [Director of Photography] [Vilmos Zsigmond|Vilmos [Zsigmond] said he's going to make it beautiful." "I hate beautiful," retorted the director. But he sucked it up [Salamon, p.171] .

The courthouse scenes, after a frantic search that drove the executive producers crazy, were finally shot at Queens County Courthouse, at night. The shoot took eight nights [Salamon, p.200] .

Another courthouse scene was shot at the Essex County Courthouse in Newark. This was a farcical scene depicting Sherman McCoy and the judge battling the protesters, featuring fighting with the sword from the statue of blind justice. After three separate test audiences said they hated it, the $2 million scene that had taken five nights to shoot was dropped [Salamon, p.372. The pain of this decision was excruciating. The scene had originally been shot for slow motion. In an attempt to make it more palatable to test audiences, De Palma had his editors change it to real-time action &mdash; an incredibly time-consuming and expensive process which essentially consisted of editing out every other frame.] .

The five-minute shot of Peter Fallow arriving at the Palm Court of the Winter Garden was a "tour de force" for operator Larry McConkey. He had to track backwards, get on a golf cart, ride it for 380 ft, get off it again, track backwards 234 ft, get into the elevator, get out again, track for another 250 ft. A camera assistant was injured on the first attempt [Salamon, p.223] . The actress playing the P.R. woman who accompanies during the shot is , 's real-life wife.

The huge party scenes in Act 3 were shot at the L.A. Natural History Museum.

Courthouse exteriors were at the Manhattan Criminal Courts building. The subway entrance was fake &mdash; there is no subway station there.

The film itself was a critical and commercial flop when it was first released. The film cost an estimated US$47 million to make, but initially grossed just over US$15 million at the U.S. box office.

Many critics complained about the casting, especially the casting of Hanks and Willis as McCoy and Fallow. Others complained that despite opening with a well-executed tracking shot, the first two acts of the film were horribly paced and that too much time was spent making Sherman McCoy a likable character rather than advancing the plot of the story.Fact|date=August 2008

But not everybody disliked The Bonfire of the Vanities-many others gave the movie positive reviews.Fact|date=September 2008