The creative industries refers to a range of economic activities which are concerned with the generation or exploitation of knowledge and information. They may variously also be referred to as the cultural industries (especially in Europe (Hesmondhalgh 2002, p. 14)) or the creative economy (Howkins 2001).

The creative industries have been seen to become increasingly important to economic well-being, proponents suggesting that "human creativity is the ultimate economic resource," (Florida 2002, p. xiii) and that “the industries of the twenty-first century will depend increasingly on the generation of knowledge through creativity and innovation," (Landry & Bianchini 1995, p. 4).

Definitions of the creative industries

“those industries which have their origin in individual creativity, skill and talent and which have a potential for wealth and job creation through the generation and exploitation of intellectual property.” (DCMS 2001, p. 04)

The current DCMS definition recognises eleven creative sectors, down from fourteen in their 2001 document. They are:

('Film and video' became 'Film, video and photography; 'Music' and 'performing arts' were combined to form 'Music and the visual and performing arts'; 'Interactive leisure software' was combined with 'Computer services' to form 'Software, computer games and electronic publishing')

To this list John Howkins would add toys and games, and also include the much broader area of research and development in science and technology (Howkins 2001, pp. 88–117). It has also been argued that gastronomy should be included. [1]

Hesmondhalgh reduces the list to what he terms 'the core cultural industries' of advertising and marketing, broadcasting, film, internet and music industries, print and electronic publishing, and video and computer games. His definition only includes those industries that create 'texts' or 'cultural artefacts' and which engage in some form of industrial reproduction (Hesmondhalgh 2002, pp. 12–14).

The DCMS list has been influential, and many other nations have formally adopted it. It has also been criticised. It has been argued that the division into sectors obscures a divide between lifestyle business, non-profits, and larger businesses, and between those who receive state subsidies (e.g., film) and those who do not (e.g., computer games). The inclusion of the antiques trade is often questioned, since it does not generally involve production except of reproductions and fakes. The inclusion of all computer services has also been questioned (Hesmondhalgh 2002, p. 13).

Some nations, such as Hong Kong, have preferred to shape their policy around a tighter focus on copyright ownership in the value chain. They adopt the WIPO's classifications, which divide the Creative Industries up according to who owns the copyrights at various stages during the production & distribution of creative content.

Others have suggested a distinction between those industries that are open to mass production and distribution (film and video; videogames; broadcasting; publishing), and those that are primarily craft-based and are meant to be consumed in a particular place and moment (visual arts; performing arts; cultural heritage).

How creative workers are counted

The primary purpose of this is to quantify - for example it can be used to count the number of firms, and the number of workers, creatively employed in any given location, and hence to identify places with particularly high concentrations of creative activities.

It leads to some complications which are not immediately obvious. For example, a security guard working for a music company would be classified as a creative employee, although not as creatively occupied.

The total number of creative employees is then calculated as the sum of:

Properties or characteristics of creative industries 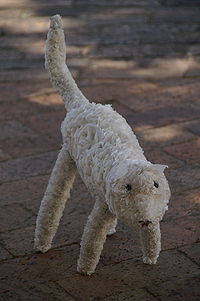 A toy cat produced in a South-African township, made from used plastic bags and old wire

According to Caves (2000), creative industries are characterized by seven economic properties:

The properties described by Caves have been criticized for being too rigid (Towse, 2000). Not all creative workers are purely driven by 'art for art's sake'. The 'ars longa' property also holds for certain noncreative products (i.e., licensed products). The 'time flies' property also holds for large construction projects. Creative industries are therefore not unique, but they score generally higher on these properties relative to non-creative industries.

Difference from the 'cultural industries'

Some authors, such as the American economist Richard Florida, argue for a wider focus on the products of knowledge workers, and judge the 'creative class' (his own term) to include nearly all those offering professional knowledge-based services.

Difference from the 'knowledge industries'

The term creative industries begins to elide with knowledge economy and questions of intellectual property ownership in general.

The creative class and diversity

Florida's focus leads him to pay particular attention to the nature of the creative workforce. In a study of why particular US cities such as San Francisco seem to attract creative producers, Florida argues that a high proportion of workers from the 'creative class' provide a key input to creative production, which enterprises seek out. He seeks to quantitatively establish the importance of diversity and multiculturalism in the cities concerned, for example the existence of a significant public gay community, ethnic and religious variety, and tolerance. (Florida 2002)

Globally, Creative Industries excluding software and general scientific research and development are said to have accounted for around 4% of the world's economic output in 1999, which is the last year for which comprehensive figures are currently available. Estimates of the output corresponding to scientific Research and Development suggest that an additional 4-9% might be attributable to the sector if its definition is extended to include such activities, though the figures vary significantly between different countries.

Taking the UK as an example, in the context of other sectors, the creative industries make a far more significant contribution to output than hospitality or utilities and deliver four times the output due to agriculture, fisheries and forestry. In terms of employment and depending on the definition of activities included, the sector is a major employer of between 4-6% of the UK's working population, though this is still significantly less than employment due to traditional areas of work such as retail and manufacturing.

Within the creative industries sector and again taking the UK as an example, the three largest sub-sectors are design, publishing, and television and radio. Together these account for around 75% of revenues and 50% of employment.

The complex supply chains in the creative industries sometimes make it challenging to calculate accurate figures for the gross value added by each sub-sector. This is particularly the case for the service-focused sub-sectors such as advertising, whereas it is more straightforward in product-focused sub-sectors such as crafts. Not surprisingly, perhaps, competition in product-focused areas tends to be more intense with a tendency to drive the production end of the supply chain to become a commodity business.

There may be a tendency for publicly-funded creative industries development services to inaccurately estimate the number of creative businesses during the mapping process. There is also imprecision in nearly all tax code systems that determine a person's profession, since many creative people operate simultaneously in multiple roles and jobs. Both these factors mean that official statistics relating to the Creative Industries should be treated with caution.

The creative industries in Europe make a significant contribution to the EU economy, creating about 3% of EU GDP - corresponding to an annual market value of €500 billion - and employing about 6 million people. In addition, the sector plays a crucial role in fostering innovation, in particular for devices and networks. The EU records the second highest TV viewing figures globally, producing more films than any other region in the world. In that respect, the newly proposed 'Creative Europe' programme (July 2011)[2] will help preserve cultural heritage while increasing the circulation of creative works inside and outside the EU. The programme will play a consequential role in stimulating cross border co-operation, promoting peer learning and making these sectors more professional. The Commission will then propose a financial instrument run by the European Investment Bank to provide debt and equity finance for cultural and creative industries. The role of the non-state actors within the governance regarding Medias will not be neglected anymore. Therefore building a new approach extolling the crucial importance of a European level playing field industry may boost the adoption of policies aimed at developing a conducive environment, enabling European companies as well as citizens to use their imagination and creativity - both sources of innovation -, and therefore of competitiveness and sustainability. It supposes to tailor the regulatory and institutional frameworks in supporting private-public collaboration, in particular in the Medias sector[3]. The EU therefore plans to develop clusters, financing instruments as well as foresight activities to support this sector. The European Commission wishes to assist European creators and audiovisual enterprises to develop new markets through the use of digital technology, and asks how policy-making can best help achieve this. A more entrepreneurial culture will have to take hold with a more positive attitude towards risk-taking, and a capacity to innovate anticipating future trends. Creativity plays an important role in human resource management as artists and creative professionals can think laterally. Moreover new jobs requiring new skills created in the post-crisis economy should be supported by labour mobility to ensure that people are employed wherever their skills are needed.

As some first world countries struggle to compete in traditional markets such as manufacturing, many now see the creative industries as a key component in a new knowledge economy, capable perhaps of delivering urban regeneration, often through initiatives linked to exploitation of cultural heritage that leads to increased tourism. It is often argued that, in future, the ideas and imagination of countries like the United Kingdom will be their greatest asset; in support of this argument, a number of universities in the UK have started to offer creative entrepreneurship as a specific area for study and research. Indeed, UK government figures reveal that the UK's creative industries account for over a million jobs and brought in £112.5 billion to the UK economy (DCMS Creative Industries Mapping Document 2001), although the data sets underlying these figures are open to question.

In recent years, creative industries have become ‘increasingly attractive to governments outside the developed world’.[4] In 2005, the United Nations Conference on Trade and Development (UNCTAD) XI High Level Panel on Creative Industries and Development commissioned several studies to identify challenges and opportunities facing the growth and development of creative industries in developing industries. As Cunningham et al. (2009) put it, ‘the harnessing of creativity brings with it the potential of new wealth creation, the cultivation of local talent and the generation of creative capital, the development of new export markets, significant multiplier effects throughout the broader economy, the utilisation of information communication technologies and enhanced competitiveness in an increasingly global economy’. A key driver of interest in creative industries and development is the acknowledgement that the value of creative production resides in ideas and individual creativity, and developing countries have rich cultural traditions and pools of creative talent which lay a basic foundation for creative enterprises.

National Institute for Excellence in the Creative Industries (NIECI), UK: