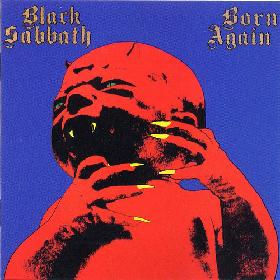 It was panned by critics at the time of its release, but reached #4 in the UK charts as well as the top 40 in the U.S. and has gained a strong cult following among a number of fans.

The CD version of this album is not available in the United States, although the album and cassette can still be found.

The album features the vocals of , former singer for , who joined the band in 1983 to replace departed vocalist . Original Black Sabbath drummer Bill Ward returned to the band as a replacement for , who had left with Dio to form the band , but quit the band right before the 1983 tour. Ex- drummer was hired to replace Ward on tour.

The album was recorded during the summer of 1983 at in , , . A major criticism of the album is its production, which Iommi and Gillan have both said is abysmal. Gillan went as far as blaming Butler, who co-produced the album, for the awful sound quality. Former Sabbath frontman said in a fall 1983 issue of "Circus" magazine (article: "Is Sabbath Turning Purple?"): "Born Again" is the best thing I've heard from Sabbath since I left the band." [http://www.sabbathlive.com/tours/83BA/art/840229-Circus.pdf]

In 2005, a collection of demo recordings of the album began circulating. It contained every song that made the final album, including a previously unreleased track called "The Fallen" as well as a complete and longer version of the song "Stonehenge". The album was of particular note because the general consensus among fans was that the production values on the demos were actually better than those on the final album, a somewhat unique phenomenon.Fact|date=July 2007 Original versions of the bootleg were released at the wrong speed; subsequent versions have been restored to normal speed.

"Digital Bitch" is rumoured to have been lyrically inspired by Sharon Arden, daughter of Black Sabbath manager and later Ozzy Osbourne's wife. In the words of Ian Gillan:

The album cover, which featured the image of an infant with horns and fangs, was designed by Steve Joule. He also handwrote the lyrics that appear on the inner bag. The deliberately lurid design was submitted by Joule in a vain attempt to be rejected from this design commission, as he was also retained on a lucrative contract by 's organisation for his sleeve designs. To Joule's horror and surprise, and approved the image for the album. Gillan and Ward were not present when the decision was made, though they later noted that they hated the finished cover. Gillan reportedly hated the cover so much, that he threw a box of 50 records out a window. Joule reports that he was drunk and high on speed when he drew the finalized designs for the album. The cover is hated by many fans, but also has a cult following Fact|date=July 2007 (much as the album itself), most notably with and both stating that it is their favorite album cover. [ [http://www.black-sabbath.com/discog/bornagain.html Black Sabbath Online: Born Again ] ] Chris Barnes of Six Feet Under also said he likes the artwork, stating; "It's really the birth of the Antichrist in a Pop Art way which is scary of sorts on a few different levels for me." [ [http://www.lucemfero.com/sixfeetunder062007.php Six Feet Under Interview ] ]

There were many problems surrounding the tour for the album, including having little room on stage due to it being decorated with replicas.

Ian Gillan recounted in interview that Stonehenge was indeed Geezer's idea, and that when asked for details by set buildings Light and Sound Design, Geezer simply said: "Lifesize". Filling three containers, it was too big for any stage, so only a small part of it was used at a time, but still the band and crew had problems edging between the monoliths.

Photos of the Born Again tour show that at least some of the stones were present on stage. [ [http://www.black-sabbath.com/gallery_2/v/concertpics/1983tour/082183/batour4.jpg.html Black Sabbath Photo Gallery: A shot of the Stonehenge set ] ]

Early in the tour, there was also a dwarf that was dressed to look like the demon-infant from the album cover. The dimension problems and use of dwarfs bear strong similarities to the infamous Stonehenge scene in the movie "", which was released a year after Sabbath's tour. This is undoubtedly a coincidence, however, because the "Stonehenge scene" was already in a 20-minute early demo of the film from 1982. [ [http://books.guardian.co.uk/extracts/story/0,,371343,00.html The A-Z of Spinal Tap | Extracts | Guardian Unlimited Books ] ]

This same tour also saw Black Sabbath frequently cover the classic "", as Ian Gillan was formerly of Deep Purple. This is one of the few cover songs Black Sabbath have ever done at live shows and did not go down well with many Sabbath fans. Gillan says it was Iommi and Butler's idea: they say it was his.

The North American tour alone featured two Dio-era tracks, "Heaven And Hell" and, late in the tour, "Neon Knights", not as a swipe at Dio but because Gillan's voice better suited the Ozzy-era material. As a result, as well as a good helping from the new album, some fan favorites reappeared in the set, like "Supernaut" and "".

Bill Ward was unable to play the Born Again tour because of personal problems. He explains: [ [http://www.allaboutjazz.com/php/article.php?id=20215 Bill Ward: From Jazz to Black Sabbath Part 2-2 ] ]

supported the band on their U.S. tour.

*In the US and , the album has never officially been released on by Warner Bros. Records. It is only available as an import.

* "Zero the Hero" was also covered by the band . It appears on "Masters of Misery: The Earache Tribute to Black Sabbath".

*In 1994, Danzig guitarist told that their song "Her Black Wings" compares a riff of "Zero the Hero". [ [http://www.misfitscentral.com/display.php?t=darticle&f=gschool.94 Look At This! :: MisfitsCentral.com ] ]

*In 2006, Ian Gillan re-recorded "Trashed" with , and for his retrospective collection "".

All songs written by Tony Iommi, Ian Gillan, Geezer Butler and Bill Ward, except where noted.

* [http://home.swipnet.se/sabbath83/ Gillan the Hero] – Fan site with information on the album and subsequent tour.