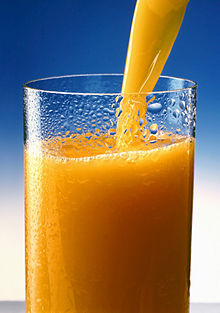 A glass of pulp-free orange juice. 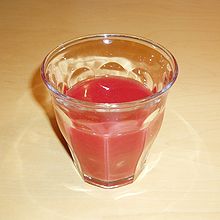 Orange juice is a popular beverage made from oranges. It is made by extraction from the fresh fruit, by desiccation and subsequent reconstitution of dried juice, or by concentration of the juice and the subsequent addition of water to the concentrate. The term "orange juice" or "OJ" is also used, both colloquially and commercially, to refer to all of these forms.

Citrus juices contain flavonoids (especially in the pulp), that may have health benefits. Orange juice is also a source of the antioxidant Hesperidin. Due its citric acid content, orange juice is acidic, with a typical pH of around 3.5.[1]

Squeezed orange juice is pasteurized and filtered before being evaporated under vacuum and heat. After removal of most of the water, this concentrated juice, about 65% sugar by weight, is then stored at about 10 °F (−12 °C). Essences and oils extracted during the vacuum concentration process may be added back to restore flavor.[citation needed]

Cans of frozen concentrate are later diluted by addition of filtered water bringing the sugar fraction down to 42%, about three times the concentration of fresh juice.[citation needed] When water is added to freshly thawed concentrated orange juice, it is said to be reconstituted.[2]

Most of the orange juice sold today throughout the world is reconstituted juice. Frozen orange juice concentrate is a common drink in the United States.[clarification needed]

A small fraction of fresh orange juice is canned. Canned orange juice retains Vitamin C much better than bottled juice.[citation needed] However, the canned product loses flavor when stored at room temperature for over 12 weeks.[4]

In the US, the major orange juice brand is Tropicana Products (owned by PepsiCo Inc.), which possesses nearly 65% of the market share. Tropicana also has a large presence in Latin America, Europe and Central Asia. Competing products include Minute Maid (of The Coca-Cola Company) and Florida's Natural (a Florida-based agricultural cooperative that differentiates itself from the competition by using only Florida grown oranges; Tropicana and Simply Orange use a mix of domestic and foreign stock). In Australia, Daily Juice (owned by National Foods) is a major brand of partially fresh partially preserved[5] orange juice. The Original Juice Co. (owned by Golden Circle) produced a fresh no-concentrate (with no preservatives) form of juice marketed as part of their 'Black Label' range of juice products. Both these products, along with other brands, are sold in the refrigerated section of supermarkets throughout Australia.

Some producers add citric acid or ascorbic acid to juice beyond what is naturally found in the orange. Some also include other nutrients such as calcium and Vitamin D, not found naturally in oranges. Low-acid varieties of orange juice are also available. Omega-3 fatty acids are sometimes added to orange juice from fish oils.[6]

Orange juice usually varies between shades of orange and yellow, though some ruby red or blood orange varieties are a reddish-orange or even pinkish. This is due to different pigmentation in ruby red oranges. The name 'orange juice' is thus given to the drink because of the name of the fruit it is made from, rather than the actual color of the juice.