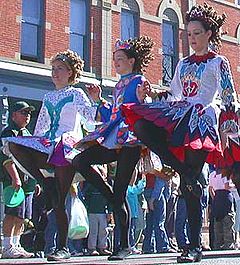 Irish dancing or Irish dance is a group of traditional dance forms originating in Ireland which can broadly be divided into social dance and performance dances. Irish social dances can be divided further into céilí and set dancing. Irish set dances are quadrilles, danced by 4 couples arranged in a square, while céilí dances are danced by varied formations (ceili) of 2 to 16 people. In addition to their formation, there are significant stylistic differences between these two forms of social dance. Irish social dance is a living tradition, and variations in particular dances are found across the Irish dancing community; in some places, dances are deliberately modified and new dances are choreographed.

Irish dancing, popularised in 1994 by the world-famous show "Riverdance", is notable for its rapid leg and foot movements, body and arms being kept largely stationary.

Most competitive dances are solo dances, though many stepdancers also perform and compete using céilí dances. The solo stepdance is generally characterised by a controlled but not rigid upper body, straight arms, and quick, precise movements of the feet. The solo dances can either be in "soft shoe" or "hard shoe".

The dancing traditions of Ireland probably grew in close association with traditional Irish music. Although its origins are unclear, Irish dancing was later influenced by dance forms from the Continent, especially the Quadrille. Travelling dancing masters taught all over Ireland, as late as the early 1900s. 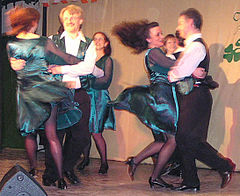 /ˈkeɪli/) dances vary widely throughout Ireland and the rest of the world. A céilí dance may be performed with as few as two people and as many as sixteen. Céilí dances may also be danced with an unlimited number of couples in a long line or proceeding around in a circle (such as in "The Walls of Limerick", "The Waves of Tory", "The High Cauled Cap", or "Bonfire Dance"). Céilí dances are often fast and complex. In a social setting, a céilí dance may be "called" -- that is, the upcoming steps are announced during the dance for the benefit of newcomers. The ceili dances are typically danced to Irish instruments such as the Irish hand drum or harp. The term céilí dance was invented in the late 19th century by the Gaelic League Céilí as a noun differs from the adjective céilí. A céilí is a social gathering featuring Irish music and dance. Céilí dancing is a specific type of Irish dance. Some céilithe (plural of céilí) will only have céilí dancing, some will only have set dancing, and some will have a mixture.

Irish set dancing (also referred to as "country set dancing") are dances based on French quadrilles that were adapted by the Irish by integrating their sean-nós steps and Irish music. The distinguishing characteristics of Irish set dancing is that it is danced in square sets of four couples (eight people), and consist of several "figures," each of which has a number of parts. The other distinguishing feature is that feet are flat on the floor dancing with a sliding /gliding style. Each part of the set dance (figure) is danced to a music tempo, mostly reels, jigs, polkas, hornpipes and slides. The sets come from various parts of Ireland and are often named for their place of origin; examples are the Corofin Plain Set, the South Galway Set and the Clare Lancers Set. 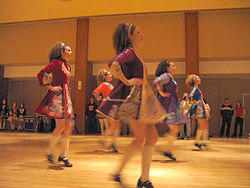 Irish step dancers from Scoil Rince na Connemara in Wilkes-Barre PA dance at the HUB, Penn State University. Here, the dancers have their hands on their hips, with their elbows pointed.

Stepdancing as a modern form is descended directly from old-style step dancing. There are several different forms of stepdancing in Ireland (including sean-nós dancing and old style stepdancing), but the style most familiar to the public at large is the Munster, or southern, form, which has been formalised by An Coimisiún le Rincí Gaelacha—the Irish Dancing Commission.

Irish stepdancing is primarily done in competitions, public performances or other formal settings. 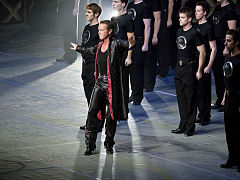 Michael Flatley is credited with bringing Irish dancing to a worldwide audience with his show Riverdance.

Sean-nós dancing in the Irish diaspora

As Irish people emigrate all over the world, they take their cultural traditions with them. Many people theorise[who?] that Sean-nós dancing has influenced various other forms of traditional solo dance, especially those found in areas with strong Irish communities. Historically, it is likely that sean-nós dance influenced the development of many American and Canadian traditional percussive dance forms, such as buck dancing, flatfooting, clogging, and tap dancing. Sean-nós dancing in the United States and Canada is most commonly seen at folk festivals, although dance workshops are beginning to introduce the style more widely.

The Irish dance masters refined and codified indigenous Irish dance traditions. Rules emerged about proper upper body, arm, and foot placement. Also, dancers were instructed to dance a step twice—first with the right foot then with the left. Old-style step dancers dance with arms loosely (but not rigidly) at their sides. They dance in a limited space. There is an emphasis on making percussive sound with the toes. The Irish dance masters of this period also choreographed particular steps to particular tunes in traditional music creating the solo set dances such as the Blackbird, St. Patrick's Day, and the Job of Journey Work, which also persist in Modern Irish Step Dancing. In this context, "set dance" signifies a separate tradition from the social dance tradition also called set dance.

There are four soft shoe dances: the reel, slip jig, light (or double) jig and single jig . Reels have a 4/4 (or sometimes 2/4 or 2/2) time signature. Slip jigs are in 9/8 time. Light and single jigs are in 6/8 time, with different emphasis within the measure distinguishing the music. Hard shoe dances include the hornpipe in syncopated 2/4 or 4/4 time, the heavy jig (also called the treble jig or hard jig) in a slow 6/8, the treble reel (heavy dance done to reel music) and traditional sets, which are a group of dances with set music and steps. Many traditional sets have irregular musical phrasing. There are also more advanced "non-traditional sets" done by advanced dancers. These have set music, but not steps. There are four traditional sets: St. Patrick's Day, Blackbird, Job of Journeywork, and Garden of Daisies.

Competitive dancers generally dance two or three steps at a time, depending on their dancing level. Each step lasts eight bars of music. They are each danced starting with the right foot, then repeated with the left foot. Set dances, however, have a different format. The dancer usually dances one step, which lasts for eight bars of music and is then repeated, resembling the steps of other dances. Then the dancer usually dances a "set", which lasts for 16 bars of music and is not repeated.

The céilí dances used in competitions are more precise versions of those danced in less formal settings. There is a list of 30 céilí dances which have been standardised and published in An Coimisiún's Ar Rinncidhe Foirne as examples of typical Irish folk dances; these are called the "book" dances by competitive stepdancers. Most Irish dancing competitions only ask for a short piece of any given dance, in the interests of time.

There are two types of shoes; soft shoes (also known as ghillies) and hard shoes. The hard shoe is similar to tap shoes, except that the tips and heels are made of fiberglass, instead of metal, and are significantly bulkier. The hard shoes were originally made of wood in the 19th century and early 20th century. The first hard shoes had wooden or leather taps with metal nails. Later the taps and heels were changed into resin or fiberglass to reduce the weight and to increase the footwork sounds. The soft shoes, which are called ghillies, are black lace-up shoes. Ghillies are only worn by girls, while boys wear black leather shoes called "reel shoes", which resemble black jazz shoes with a hard heel. Boy's soft-shoe dancing features audible heel clicks.

Several generations ago, the appropriate dress for a competition was simply "Sunday Best" (clothes one would wear to church). Irish Dance schools generally have school dresses, worn by lower-level competitors and in public performances. As dancers advance in competition or are given starring roles in public performances, they may get a solo dress of their own design and colors. In the 1970s and 1980s, ornately embroidered dresses became popular. Today even more ornamentation is used on girls' dresses. Solo dresses can range from 100 to 5000 dollars, and are unique to each dancer. Today most women and girls curl their hair or wear a wig or hairpiece for a competition. Most men wear a shirt, vest, and tie paired with black trousers.

An organised step dance competition is referred to as a feis (pronounced "fesh", plural feiseanna). The word feis means "festival" in Irish, and strictly speaking would also have competitions in music and crafts. Féile (/ˈfeɪlə/) is a more correct term for the dance competition, but the terms may be used interchangeably. Dance competitions are divided by age and level of expertise. The names of the levels and other organising rules vary between countries and regions. Dancers are scored based on technique (placement of the feet, turn out, off of their heels, etc.), style (grace, power, etc.) and other items such as timing, rhythm, and sounds in their hard shoe dances.

An annual regional Championship competition is known as an oireachtas (/oʊˈrɒktəs/). Each of the major Irish stepdance organisations hosts a World Championship; dancers qualify in various ways, typically by scoring well at an oireachtas.

An Comdhdail's All Ireland and International championships (the equivalent of An Coimisiun World Championships) takes place each Easter week, with the competition being held in Ennis in 2011.

The Largest NAIDF (North American Irish Dance Federation) competition currently is The Nationals held at Lehigh University in Bethlehem Pa in 2010, and at The Valley Forge Convention Center in Pa in 2012.

The WIDA (World Irish Dance Association) which is mainly dancers from European countries, also hold their own World and European Championships over the Easter week, with the competition being held in Berlin in 2011, and scheduled for Poland 2012.