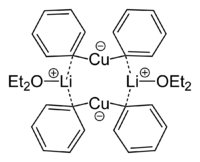 Henry Gilman prepared methylcopper in 1936. In 1941, Kharash discovered that reaction of a Grignard reagent with cyclohexenone in presence of Cu(I) resulted in 1,4-addition instead of 1,2-addition.[5] In 1952 Gilman investigated for the first time dialkylcuprates. In the 1960s, complexes of alkenes and CO with copper(I) were established.

Organocopper compounds are very reactive towards oxygen and water forming copper(I) oxide and tend to be thermally unstable. Because most cuprates are salts, many are generally insoluble in nonpolar solvents. Despite these difficulties, organocopper reagents are frequently generated and consumed in situ with no attempt to isolate them. They are used very frequently in organic chemistry as alkylating reagents because they exhibit more functional group tolerance than corresponding Grignard and organolithium reagents. The electronegativity of copper is much higher than its next-door neighbour in the group 12 elements, zinc, suggesting less nucleophilicity for its carbon ligands.

Copper belongs to the group of coinage metals together with silver and gold and their chemistries have many similarities. The oxidation state can be +1 or +2 and intermediates can have oxidation state +3. Monovalent alkylcopper compounds (RCu) are polymeric but form cuprates (R2CuLi) upon treatment with organolithium compounds (RLi). These cuprates are sometimes referred to as Gilman reagents. Organocopper compounds can be stabilized by complexation to a variety of ligands such as organophosphanes (R3P), thioethers (R2S), and cyanide (CN-).

The cuprates complex form complicated aggregates both in crystalline form and in solution. Lithium dimethylcuprate is a dimer in diethyl ether forming an 8-membered ring with two lithium atoms coordinating between two methyl groups. Similarly, lithium diphenylcuprate forms a dimeric etherate, [{Li(OEt2)}(CuPh2)]2, in the solid state.[6]

The first ever crystal structure was determined in 1972 by Lappert for CuCH2SiMe3. This compound is relatively stable because the bulky trimethylsilyl groups provide steric protection. It is a tetramer forming an 8-membered ring with alternating Cu-C bonds. In addition the four copper atoms form a planar Cu4 ring based on three-center two-electron bonds. The copper to copper bond length is 242 pm compared to 256 pm in bulk copper. In pentamesitylpentacopper a 5-membered copper ring is formed and pentafluorophenylcopper is a tetramer.[7]

In many organometallic reactions involving copper, the reaction mechanism invokes a copper intermediate with oxidation state +3. For instance, in reductive elimination processes, Cu(III) is reduced to Cu(I). However Cu(III) compounds are rare in chemistry in general and until recently organocopper(III) species have been elusive. In 2007 the first spectroscopic evidence was obtained for the involvement of Cu(III) in the conjugate addition of the Gilman reagent to an enone:[8] In a so-called rapid-injection NMR experiment at -100°C, the Gilman reagent Me2CuLi (stabilized by lithium iodide) was introduced to cyclohexenone (1) enabling the detection of the copper — alkene pi complex 2. On subsequent addition of trimethylsilyl cyanide the Cu(III) species 3 is formed (indefinitely stable at that temperature) and on increasing the temperature to -80°C the conjugate addition product 4. According to an accompanying in silico experiments [9] the Cu(III) intermediate has a square planar molecular geometry with the cyano group in cis orientation with respect to the cyclohexenyl methine group and anti-parallel to the methine proton. With other ligands than the cyano group this study predicts room temperature stable Cu(III) compounds. 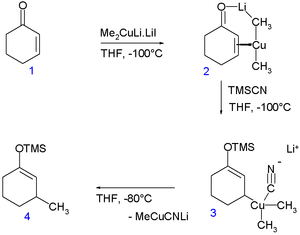 Copper halides react with organolithium reagents to form the organocopper compound. Phenylcopper is prepared by reaction of phenyllithium with copper(I) bromide in diethyl ether. Reaction with a second equivalent of R-Li to R-Cu then gives the lithium diorganocopper compound. Copper halides also react with Grignard reagents. The compound pentamesitylpentacopper is prepared from mesityl magnesium bromide and copper(I) chloride. Copper salts add to terminal alkynes to form copper acetylides The copper metallocene (η-cyclopentadienyl triethylphosphine) copper can be prepared by reaction of copper(II) oxide with cyclopentadiene and triethylphosphine in pentane at reflux.

Organocopper reactions are classified in a number of reaction types.

Substitution reactions of cuprates R2CuLi to alkyl halides R'-X gives the alkylcopper compound R-Cu, the coupling product R-R', and the lithium halide Li-X. The reaction mechanism is based on nucleophilic attack, namely oxidative addition of the alkyl halide to Cu(I) elevating it to a planar Cu(III) intermediate followed by reductive elimination. The nucleophilic attack is the rate-determining step. In the case for substitution of iodide, single electron transfer mechanism is proposed (see figure).

Many electrophiles will work. The approximate order of reactivity, beginning with the most reactive, is as follows: acid chlorides[10] > aldehydes > tosylates ~ epoxides > iodides > bromides > chlorides > ketones > esters > nitriles >> alkenes

Reductive coupling is a coupling reaction of aryl halides with a stoichiometric equivalent of copper metal that occurs in the Ullmann reaction. In an example of a present-day cross-coupling reaction called decarboxylative coupling, a catalytic amount of Cu(I) displaces a carboxyl group forming the arylcopper (ArCu) intermediate. Simultaneously, a palladium catalyst converts an aryl bromide to the organopalladium intermediate (Ar'PdBr), and on transmetallation the biaryl is formed from ArPdAr'.[11][12] 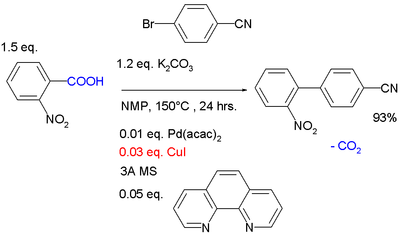 Conjugate additions to enones are done with organocuprates. Note that if a Grignard reagent (such as RMgBr) is used, the reaction with an enone would instead proceed through a 1,2-addition.[13] The 1,4-addition mechanism of cuprates to enones goes through the nucleophilic addition of the Cu(I) species at the beta-carbon of the alkene to form a Cu(III) intermediate, followed by reductive elimination of Cu(I).[14] In the original paper describing this reaction, methylmagnesium bromide is reacted with isophorone with and without 1 mole percent of added copper chloride (see figure).[5] 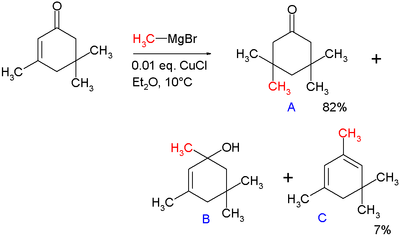 A 1,6-addition is also possible, for example in one step of the commercial-scale production of fulvestrant [15]:

Carbocupration is a nucleophilic addition of organocopper reagents (R-Cu) to acetylene or terminal alkynes resulting in an alkenylcopper compound (RC=C-Cu).[16] It is a special case of carbometalation and also called the Normant reaction.[17]