This article is about the poem by Lord Byron, for other uses see Mazeppa 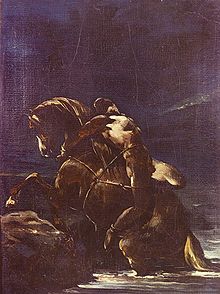 "Mazeppa" by Théodore Géricault ca. 1823; based on Byron's poem.

Mazeppa is a Romantic narrative poem written by Lord Byron in 1819, based on a popular legend about the early life of Ivan Mazepa (1639-1709), a Ukrainian gentleman who later became Hetman of the Ukrainian Cossacks.[1] According to the poem, the young Mazeppa, while serving as a page at the Court of King John II Casimir Vasa, has a love affair with a Countess named Theresa, who was married to a much older man. The Count, on discovering the affair, punishes Mazeppa by tying him naked to a wild horse and setting the horse loose. The bulk of the poem describes the traumatic journey of the hero strapped to the horse. The poem has been praised for its “vigor of style and its sharp realization of the feelings of suffering and endurance”.[2] This poem also inspired Alexander Pushkin to write his poem Poltava as an answer to Byron's poem. The collection contained the short story "A Fragment", also knowns as "Fragment of a Novel" and "The Burial: A Fragment", one of the earliest vampire stories in English.

The poem opens with a framing device: Mazeppa and the Swedish King Charles XII, together with their armies, are retreating from the Battle of Poltava, where they were defeated by the Russians. Exhausted and war-weary, the two men set up camp for the night. (Stanzas 1-2) The King admires Mazeppa's horsemanship, and Mazeppa offers to tell him how he learnt this skill (Stanza 4).The poem then switches to the first person. Mazeppa describes his youth and his service as a page to King John II Casimir in Poland. (Stanza 4). He becomes acquainted with Theresa, a beautiful Orientalized woman who "had the Asiatic eye" (l. 208). She is married to a Count who is thirty years her senior (l. 155). Mazeppa falls passionately in love with her (l. 266-7), is unable to control his passions (l. 290-295), and they meet at night and consummate their love. (l. 298-300)

However, the Count's men catch them together (l. 325-6) and bring him to the Count. The Count orders an unusually cruel punishment: Mazeppa is to be tied naked to a steed, which is then to be taunted and set loose. (Stanza 9) Stanzas 10 to 18 recount the steed's flight across Eastern Europe, emphasizing the pain, suffering and confusion that Mazeppa feels. However, the horse has seemingly limitless energy. Mazeppa nearly dies twice. In Stanza 13, he describes himself "full in death's face" (l. 557), but is restored when the horse swims through a river. Stanza 18 concludes with a description of "an icy sickness" and his vision of a raven flying overheard, ready to feast on his corpse. However, in Stanza 19, Mazeppa awakes to find himself in bed, with his wounds being tended by a "Cossack Maid" (l. 817). In the final stanza, Mazeppa's narrative ends. The poet-narrator describes Mazeppa preparing his bed for the evening. The King is already asleep (l. 867 - 880)

There are historical sources which verify that Ivan Mazepa served in the Polish Court to John II Casimir. However, it is unclear why he left Poland in 1663 and returned to his homeland in what is now Ukraine. There is no historical evidence to support that Mazepa was exiled from Poland because of a love affair, or that he was punished by being strapped to a wild horse.[3]

However, this colorful legend was in circulation before Byron published his poem. Voltaire repeats it in History of Charles XII, King of Sweden (1731). This appears to have been Byron's main source for his poem: his 'Advertisement' to the poem includes three long quotations from this work. Several critics have also speculated that Byron was familiar with the novel Memoires d'Azema (1764) by the French writer André Dorville, as there are significant similarities between the plot of this novel and of Byron's poem.[4]

Byron's references to Mazepa's participation, in the Great Northern War alongside Charles XII, and their eventual defeat, are historically accurate.

Many critics see Mazeppa as a transitional work in Byron's oeuvre. Its dates of composition (1818-1819) place it between the earlier Eastern tales such as The Prisoner of Chillon (1817), which describe agonized, maudlin Byronic heroes and the later satirical, ironic Don Juan (1818-9). Leslie Marchand argues that Mazeppa is a partly unsuccessful work, as it is torn between high emotion and lighter irony.[5] Mark Phillipson also sees Mazeppa as a transitional work of a "mongrel genre, the historical verse-romance". He argues that the poem is characterized by "moral ambivalence", and it remains unclear whether Mazeppa is a sympathetic hero or not.[6]

The question of whether the audience is expected to sympathize with Mazeppa has long been a subject for critical discussion. W.H. Marshall (1961) argues that Mazeppa is entirely unsympathetic: a "garrulous and egoistic old man" who never atones for his crime and whose hackneyed description of his passion for Teresa "becomes tedious at once".[7] Jerome McGann (1968) takes the opposite view, arguing that Mazeppa's "wild ride" acts an initiation process which makes him into a mature hero who is able to restrain his passions, unlike King Charles. He compares Mazeppa to Meursault, the existentialist hero of Albert Camus' novel The Stranger (1942).[8]

Hubert Babinski (1974) also offers a sympathetic reading of the character Mazeppa, pointing out his kindness to Charles and the horses in the opening and closing chapter. Babinski suggests that the hero Mazeppa is "one of Byron's most realistic creations, heroic within the bounds of human potential" and that he is a "fine specimen of a man".[9] He further argues that Mazeppa's death-in-life experiences during his "wild ride" are central to the poem's meaning and symbolic of the possibilities of human transformation and rebirth. He argues that the French painters who took up the Mazeppa theme further developed this idea.[10]

More recent interpretations have attempted to apply the insights of critical theory to the poem. Zbigniew Bialas (1999) offers a Saidian postcolonial reading, suggesting that Byron orientalizes Eastern Europe and attempts to stamp an identity on Mazeppa, who nonetheless evades fixed national and political identities.[11] Jane Stabler (2004) reads the poem through the prism of postmodern theory, suggesting that uses Byron's Mazeppa as an example of a poem which "draws attention to the fictive contours of history".[12]

Babinski points out that although Mazeppa received a flurry of reviews upon publication, later critics of Byron have rarely addressed the poem.[13] Certainly there is less scholarship on Mazeppa than many of Byron's other narrative poems, and Mazeppa does not appear in Byron anthologies such as the 1978 Norton Critical Anthology.[14]

However, Byron's poem was popular among his contemporaries and provoked the rise of a 'Mazeppa Cult' among his contemporaries. The French poet Victor Hugo wrote his own poem 'Mazeppa' for his 1829 collection Les Orientales, acknowledging Byron. Several French artists produced paintings depicting Mazeppa's "wild ride" including Théodore Géricault, Eugène Delacroix, and Claude-Joseph Vernet.[15] Currier and Ives published an illustrated edition of Byron's poem in 1846 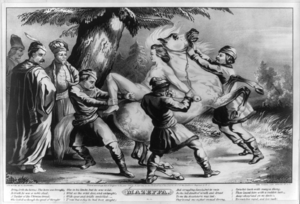 Currier and Ives illustration to their 1846 printing of the poem

In Russia, Aleksandr Pushkin's narrative poem Poltava (1828-29) deals with a later stage of Ivan Mazepa's life, his switching of allegiance from the Russians to the Swedes and his defeat in the Battle of Poltava.

In the theatre, a show called "Mazeppa, or the Tartar Horse" premiered at the Cirque Olympique in Paris in 1825. This was copied in both the USA and England[16] In the USA version of this act, Mazeppa was played by a female, Adah Isaacs Menken, who was scandalously clad only in tights. Mazeppa became the most widely performed drama in the American west from the 1860s until the turn of the century,[citation needed] and was also popular in London.[17] In 1877, Albert Aiken wrote a dime novel called The Indian Mazeppa or The Madman of the Plains, where the Mazeppa myth is transposed to the Wild West.[18]

The persona of the female Mazeppa is used as the stage name of a stripper, a character in the well-known Broadway musical Gypsy: A Musical Fable (1959).

In the early twentieth century, a film Mazeppa or the Wild horse of Tartary, based on the stage play derived from the Byron poem, dir. Francis Boggs, (1910) was produced in the USA.

Byron began writing Mazeppa on 2 April 1817 and completed it on 26 September 1818. It was first published by John Murray on 28 June 1819, alongside Byron's "Ode to Venice" and a short prose fragment, "Fragment of a Novel", one of the earliest vampire tales in English literature.[19]