Infobox_Film
name = What Lies Beneath 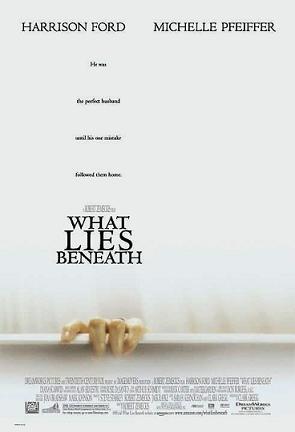 "What Lies Beneath" (2000) is a by . It tells the story of a housewife who finds her home is haunted. The film stars and as "Norman" and "Claire" Spencer.

"Tagline:" He was the perfect husband until his one mistake followed them home.

Claire Spencer () enters a new phase of her life after her daughter leaves home. With her husband, renowned scientist Dr. Norman (), Claire is now living in a remodelled lakeside home in that once belonged to Norman's scientist father. However, when Claire meets her new neighbour Mary (), she learns how terrified Mary is of her husband Warren (). And when Mary suddenly disappears, clues lead Claire to suspect that she was murdered by her husband.

So when strange events start occurring in her house, Claire is certain that Mary's ghost is haunting her. But as the events get more and more mysterious, and Mary then turns up alive, Claire is forced to probe the events of Norman's past in order to learn who is really haunting them, and how to put the ghost to rest.

As it turns out the ghost haunting Claire is in fact the mistress of her husband, Norman. He killed her a year before and now she wants to communicate with Claire about the truth of what happened to her.After Norman finds out that Claire knows his secret he drugs her and tries to drown her in the bathtub. However she is able to pull the plug and thus drain the tub. She gets up and finds her husband downstairs, unconscious (after he had smashed his head on the bathroom sink).A struggle ensues and they end up driving off a bridge. The mistress' ghost drags Norman down with her and allows Claire to escape.

In an epilogue, Claire is seen walking in a cemetery, where she places flowers on the mistress's grave, but not on Norman's. A silhouette of her face can be seen as the scene fades to black.

* and were director 's first and only choices for the lead roles of Claire and Norman Spencer.
*Director filmed "What Lies Beneath" while production on "" was shut down; actor had to lose weight and grow a beard for his character.

"What Lies Beneath" was released on DVD on (, ). The film was presented in anamorphic widescreen in its original 2.35:1 aspect ratio.

The film was rated by the for Terror/Violence, Sensuality and Brief Language.

The to the film was released on (, ) and featured the film's entire instrumental score.

Budgeted at over $90,000,000, "What Lies Beneath" was released on , and was met with mostly positive reviews. It opened #1 at the box office, grossing just under $30 million. It continued strongly throughout the summer of 2000, and ended up grossing over $155 million in the United States, and nearly $300 million worldwide.

Film critic Roger Ebert noted in his review that he felt the problem with Zemeckis' desire to direct a Hitchcock-ian film was to involve the supernatural, which he believes to be something would never have done [In the Rosemary's Baby DVD featurette, it is mentioned that the film was offered to Hitchcock, and he declined because it involved the supernatural] .